The power system network is classified into three parts; Power Generation, Transmission, and Distribution. The transmission system is used to connect the generating system with the load. High voltage is used to transmit the power to reduce transmission losses.

According to the type of transmitted power, the transmission lines are classified into two types. 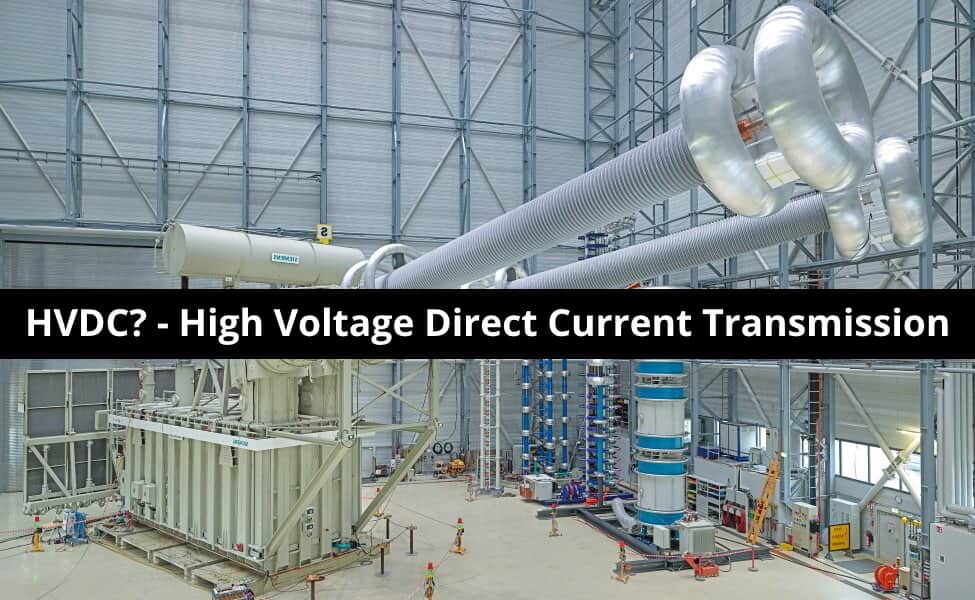 HVDC system is also used to interconnect separate power system networks having different characteristic and frequencies where AC transmission is not applicable. There are some advantages of HVDC over HVAC, that’s why it is preferred as compared to a typical HVAC system. Let’s see what is HVDC and how it works?

The below figure shows the single line diagram of the HVDC transmission line. Here we will discuss the function of each component.

The component used for this system is listed below.

Electrical power generates and utilizes in the form of AC power. Hence, the converters are used in both ends of the transmission line. The rectifier is used to convert AC to DC at sending end of the line. And the inverter is used to convert DC to AC at receiving end of the line. The size of these converters is very big and generally, it is placed in a separate building known as valve hall. 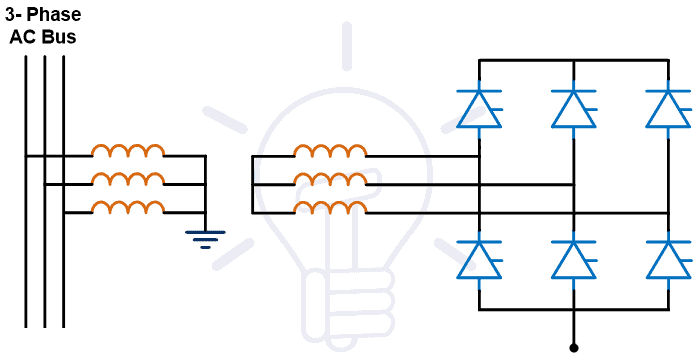 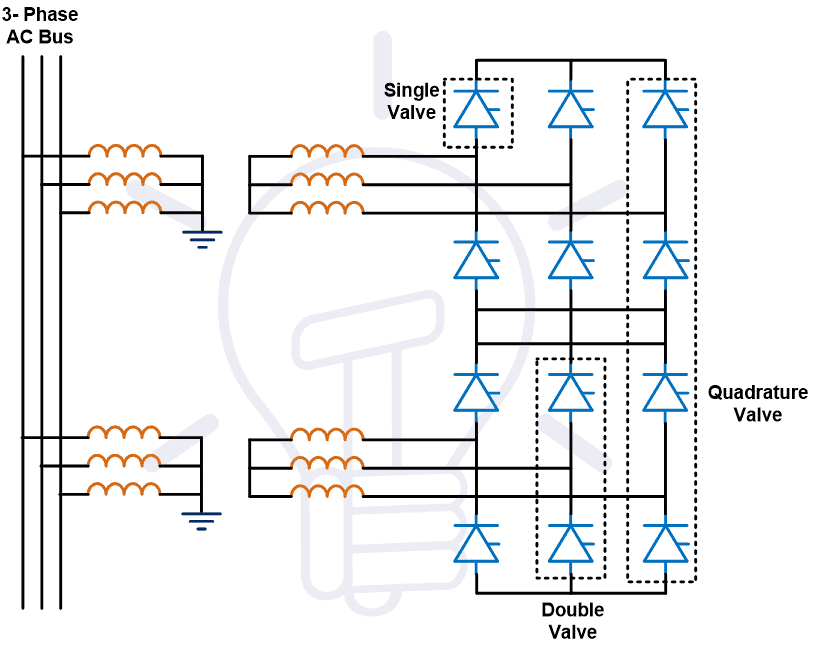 Smoothing Reactor is connected in series with the converter at the DC side. It is used to make current ripple-free and decrease the harmonics in the DC system. It is also used for protection purposes by limiting the fault current. It can be connected on the line side or neutral side.

According to the type of HVDC system, the number of conductors is selected. It is used to transmit the HVDC power from the sending end to the receiving end. In the DC system, there is no skin effect due to the absence of frequency. And compared to the HVAC system, the size of the conductor is small for the same power.

Reactive power is required for the operation of the converter. This power can be supplied through the capacitor bank, synchronous condenser, or a suitable generating station locate near the converter. In the case of line commutated converter, the reactive power required is between 40-60% of its power rating. This demand can be reduced by converter transformer having a sufficient range of on-load tap changers. The harmonic filter supplies some amount of reactive power. In the case of voltage sourced converter, it can generate or absorb reactive or real power. Hence, it does not require an additional reactive power source.

The converter station consists of various protection equipment like a circuit breaker, grounding switch, isolating switch, and lighting arrester. The circuit breaker is used to protect the converts against overheating. The lightning arrester is used to protect the converter station from a lightning surge on the AC system. It also consists of an instrument transformer for measurement as well as control and protection purposes.

According to the arrangement of HVDC Cables, the transmission lines are classified into four types.

In this type of HVDC system, only one conductor is used to make a connection between sending end and receiving end. And the ground or seawater is used for the return path. Hence, the cost of this system is less compared to other systems. But it is not useful for high power applications.

This system is the most commonly used compared to other HVDC systems. In a bipolar HVDC system, two conductors are required. One conductor is a positive conductor and the other is a negative conductor of the same magnitude with respect to earth. Hence the voltage difference between each conductor is twice. This type of system arrangement is used to transmit power for long-distance.

Two converters are used at each end of the line. The neutral point is grounded. Therefore, each line can operate independently. Hence, it is a combination of two monopolar systems. If a fault occurs in one conductor, the second conductor will continuously transmit power and increase the reliability of the system. In this condition, the ground is used as a return path and it works as a monopolar system. When a fault is cleared, the system again works as a bipolar system.

Related Post: Why Do Electronic Circuits Use DC Current instead of AC? 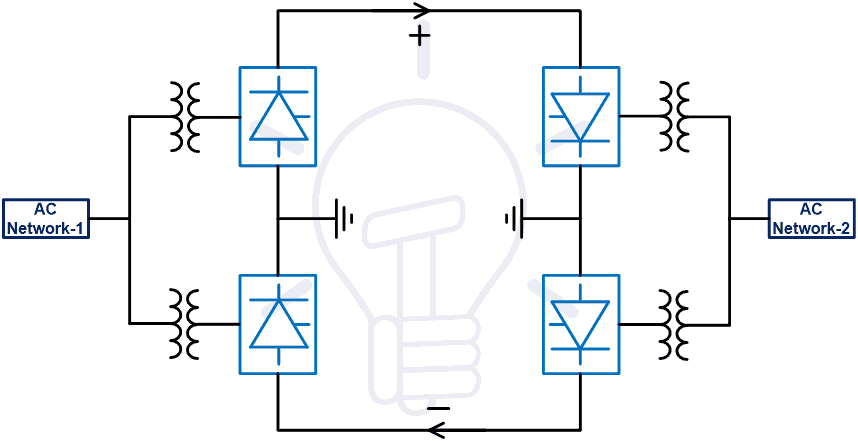 If a fault occurs in one conductor, the second conductor will continue to transmit the power. In this condition, more than 50% of rated capacity power can transmit by overloading on a conductor. But it will increase the power loss. The main disadvantage of this system is the large return current. The block diagram of this system is as shown in the below figure. 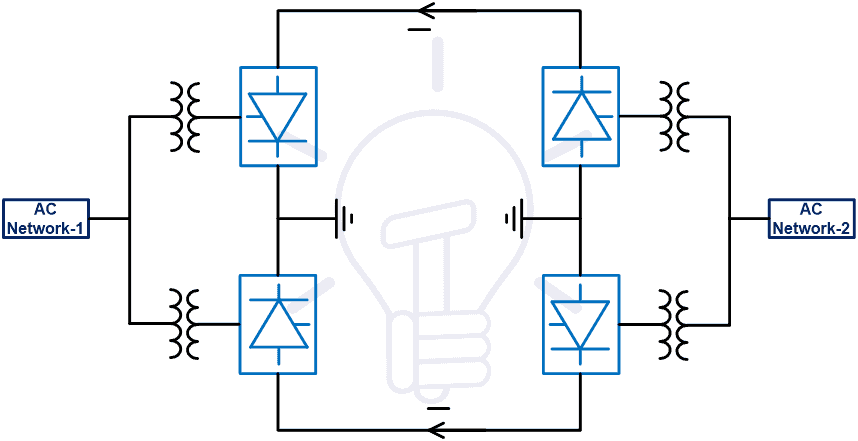 In the case of the HVAC Transmission system, after a certain length, substations are required and the intermediate compensating network is necessary for good power quality. In the case of the HVDC line, this type of component is not required. And the size of the tower is less in the HVDC system compared to the HVAC system. Therefore, the overall cost of this system is less.

But if the length of the line is small, then the converter cost is increased, and, in this condition, the HVDC system is not economical. So, for long-distance line HVDC line is economical and for a small distance of line HVAC system is economical.

The below graph shows the relation between the cost and length of the line for HVDC and HVAC systems. The point where both graphs intersect, that point is known as breakover point. 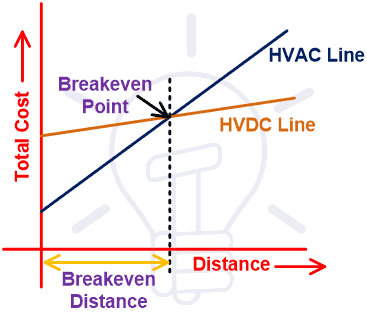 In the HVDC system, a number of conductors are less and the distance required between two phases and phase to the ground is very less compared to the HVAC transmission system. So, the overall dimension of the tower is less in the HVDC system. And it will decrease the cost of the tower.

Due to the absence of reactive power in the HVDC line, the losses are less compared to the HVAC system. The charge is equally distributed over the entire cross-section of the conductor. Hence, there is no skin effect in the HVDC system and offers less resistance to the line. It decreases the power loss of line and increases the efficiency of the entire system.

In the HVDC system, voltage and current can be controlled by the converters. And also, the direction and magnitude of power flow controlled with the help of converters. Hence, this will increase the stability of the system.

The compensation devices are used for good voltage regulation in the HVAC transmission line. In this condition, the system voltage is varying with respect to the load. But, in the case of DC line, the compensation devices are not used and voltage can directly control at converter stations. The controllers are used in converter stations. So, it will operate on constant current and voltage. And this system has far good voltage regulation compared to the HVAC system.

Most of the DC transmission systems are bipolar type and consists of two conductors. Hence, if the fault occurs in one conductor, other conductors will continue to supply at 50% loading capacity. This is not possible in the HVAC system.

The length of the line of underground cable is the main constraint in the case of the HVAC line because of the charging current. But the charging is not present in the HVDC system. So, there is no limit of distance for the HVDC line.

Types of Computer Memory with their Applications

What is Diode? Construction & Working of PN Junction Diode