Difference Between HVAC and HVDC

The electricity generated in a power generating stations is transmitted over long distances to reach an electrical substation which distributes it among the consumers. The voltage being used for long-distance power transmission is very high. We will get to the reason why it needs to be high voltage. Apart from that, the power transmitted can be either in AC (Alternating) or DC (Direct Current) form. Therefore, the power can be transmitted using either HVAC (High Voltage Alternating Current) or HVDC (High Voltage Direct Current). 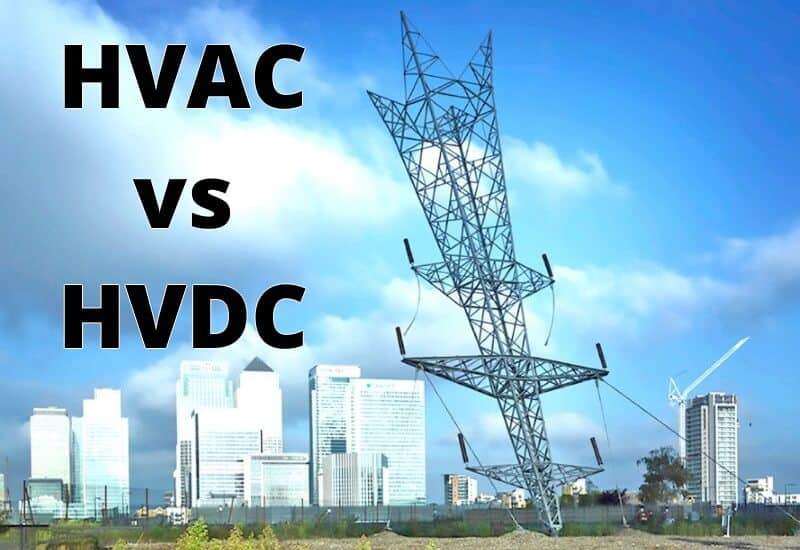 Why High Voltage Necessary for Transmission?

The voltage plays a vital role in reducing the line losses also known as transmission losses. Every electrical conductor that we use for power transmission has some value of ohmic resistance R. These conductors generate heat energy when current I flow through it, which is actually the energy or Power P being wasted.

According to ohms law

Also the equation of power;

Putting the value of V = I x R

As you can see the energy wasted in a conductor during transmission depends on the current, not voltage. But we can use the voltage conversion using special equipment to increase or decrease the amount of current.

During the conversion of voltage, the power remains conserved & it does not change. Only the voltage & current decrease & increase by the same factor. That is;

For example, 11KW power at the voltage of 220v has 50 Amps in it. In such a case, the transmission line losses will be

As you can see, increasing the voltage reduces the power losses significantly in transmissions lines.

So in order to decrease the current in the transmission cables while maintaining the same amount of power transmission, we increase the voltage.

The War of the Current (AC VS DC)

In earlier days, during the era of war of current (AC Vs. DC, late 1880s), The DC transmission was first introduced but it was considered very inefficient due to the lack of equipment for its voltage conversion such as a transformer which can easily convert AC voltages from low to high voltage & vice versa. While there were some low voltage DC generating stations that could only supply power to a couple of miles radius, any further than that, the voltage dropped significantly. Thus they require multiple generating stations in a small area which was very expensive.

While transmitting high voltage AC or DC, there are few points that need to be taken into consideration before choosing an efficient form of power transmission. In this article, we are going to discuss them in detail.

Nowadays both types of power transmission are used all over the world. While these both have some merits & demerits, we are going to discuss each of them briefly in this article below. 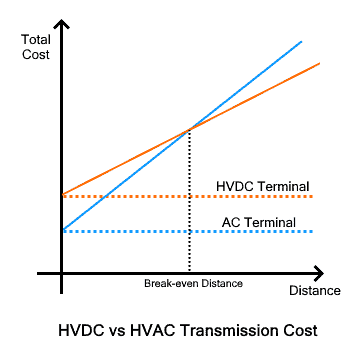 The transmission distance at which the overall investment cost for HVAC start increasing than HVDC is called Break-even Distance. This distance is estimated at around 400 – 500 miles (600- 800 in kilometers). HVDC is a better choice for power transmission over the break-even distance. However, below this distance, HVAC is more economical than HVDC. This information can be easily understood by the graph above.

Since the HVDC transmission is used for transmission over long distances between two points, we cannot take power at any point in-between because it would need an expensive converter to step down such high DC voltages. While HVAC transmission offers flexibility by utilizing inexpensive equipment like transformers at multiple terminal stations to step down these high voltages.

When the voltage increases above a certain limit, the air surrounding the conductor starts ionizing & generates sparks that waste some energy, this is called corona discharge. The losses due to corona discharge also depend on the frequency & since DC has zero frequency, the corona loss in HVAC is almost 3 times more than in HVDC.

The alternating current flow in a conductor is divided in such a way that the current density tends to stay largest at the surface of the conductor & less at the center, this is called skin effect. Since much of the cross-sectional area is ineffective & we know that the resistance is directly proportional to the cross-sectional area, the resistance of the conductor increases. However, the DC current in a conductor is uniformly distributed because the skin effect only depends on the frequency. Therefore, only HVAC transmission experience power loss due to skin effect.

The skin effect causes the conductor to carry most of the current at its surface & less current at the core. It depends on the frequency & it is directly proportional to it. It decreases the efficiency of the conductors being used. Therefore, in order to supply a larger current, the cross-sectional area of the conductor needs to be increased. 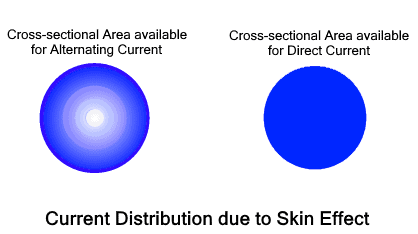 As we know, the voltage & current ratings of a cable are the maximum allowable limit that it can tolerate. The AC has a peak voltage & current that is actually 1.4 times larger than its average (the actual average power delivered) or its DC value. But in DC the peak & average values are the same. 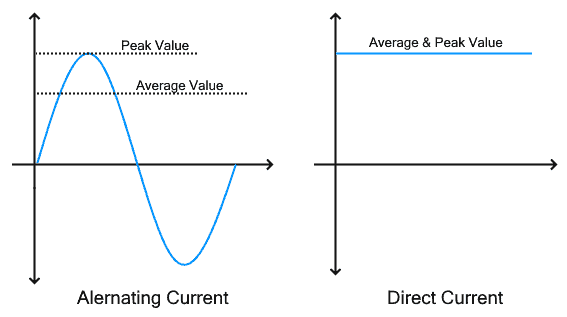 The right-of-way affects the cost of materials, & construction requirements for the said transmission system. We can say HVDC has a narrower right-of-way than HVAC.

The capacitance only reacts to the change in voltage which is constantly happening in AC, & only during switching in DC. Due to such capacitance, the cable does not supply power (at the receiving end) before being fully charged. In the case of AC, the cable is continuously charged & discharged (50 or 60 times in a second) which results in a huge power loss. While in DC, the cable is charged only once. Read more about the Submarine Cables Construction, Characteristics, Cables Laying & Joints.

The HVAC lacks in controllability of Power flow whereas HVDC links use semiconductor converters based on IGBTs which can be switched on & off multiple times in a cycle. However, these converters are complex but it helps in optimizing the distribution of power flow to the entire system & also improves the harmonic performance. These controlled electronic converters offer quick protection against line faults & fault clearance as opposed to the HVAC system

The idea of a smart grid is that each generating station can supply power to a combined grid system. It helps in generating a high amount of power using small grids but it is quite difficult to connect multiple asynchronous AC grids. 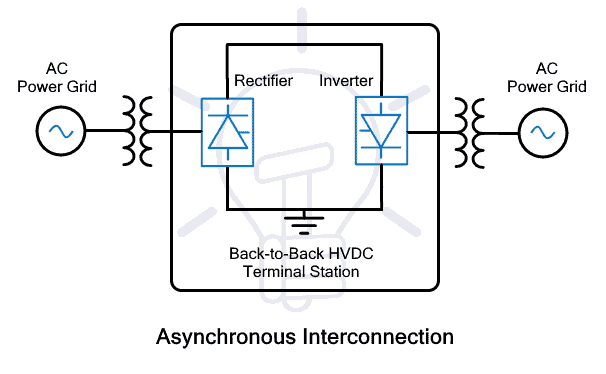 According to the frequency, some countries use 50 Hz while other countries use 60 Hz power grids. Also, two different power grids may have the same frequency but they may be out of phase. Such types of systems are called asynchronous systems. These power grids cannot be connected together using a normal AC interlink.

As far as DC is concerned, there is no phase or frequency. Therefore the HVDC interlink can easily interconnect such asynchronous power grids. The HVDC interlink converts the AC into DC which has no frequency & it can be easily combined with any other HVDC & transmit it to the receiving terminal where HVDC inverters convert it back into AC with the required frequency.

The Circuit breaker is a very important equipment in high voltage power transmission. It de-energize the whole circuit in case of any fault or maintenance. The circuit breaker needs arc-extinguish capabilities in the current to break the power supply.

Therefore, the circuit breakers for HVAC are simple & easy to design due to AC’s “self arc-extinguish” capability. While for HVDC, the CB design is quite complex & they are fairly expensive than HVAC circuit breakers.

Main Differences Between HVAC and HVDC