Semiconductor devices such as thyristors play vital role in power regulation in power electronics but since they conduct in only one direction, they not suitable for AC circuits. This is where DIAC and TRIAC comes into play. They regulate power supplied to AC loads such as controlling speed of motors. 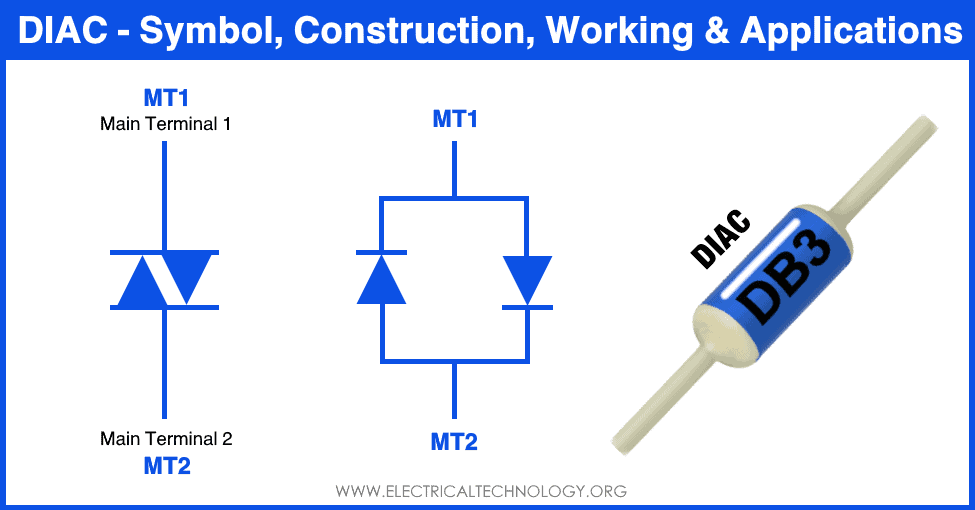 DIAC is an acronym that stands for “Diode for Alternating Current”. It is a two-terminal bidirectional switch that conducts in both directions when the applied voltage exceeds its break over voltage. It cannot amplify or offer controlled switching.

It belongs to the family of thyristors but It is an uncontrolled switch because it does not have a control or gate terminal. Its name implies that it is a diode that can conduct AC in both directions. It is mainly used for triggering other devices such as TRIAC due to its symmetrical switching characteristics. 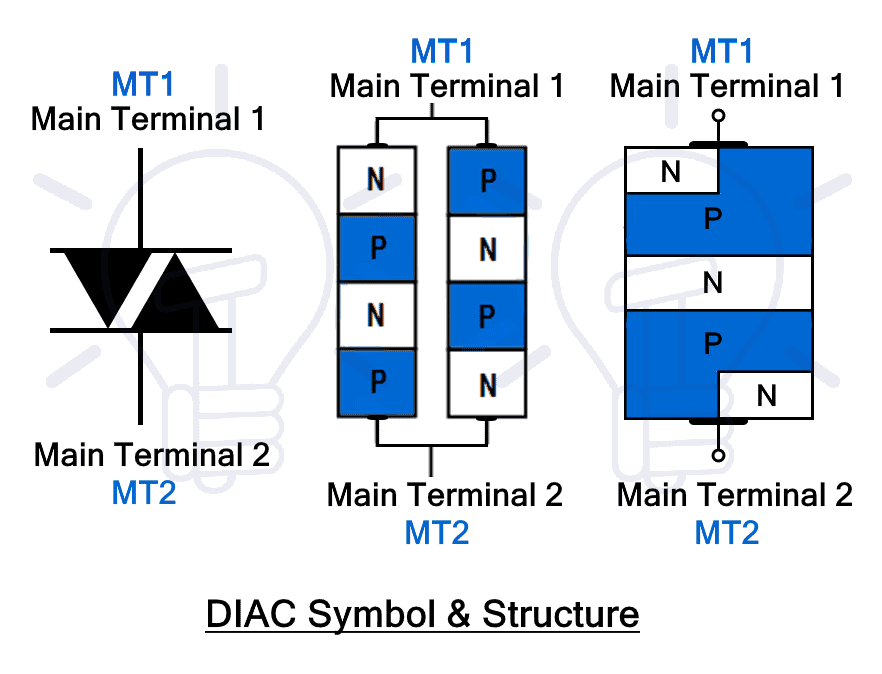 The symbol of DIAC resembles two diodes in antiparallel

. It has two terminals named A1 or MT1 and A2 or MT2. MT stands for main terminals. Since it can conduct in both directions, there are no anode and cathode terminal as shown in the figure. 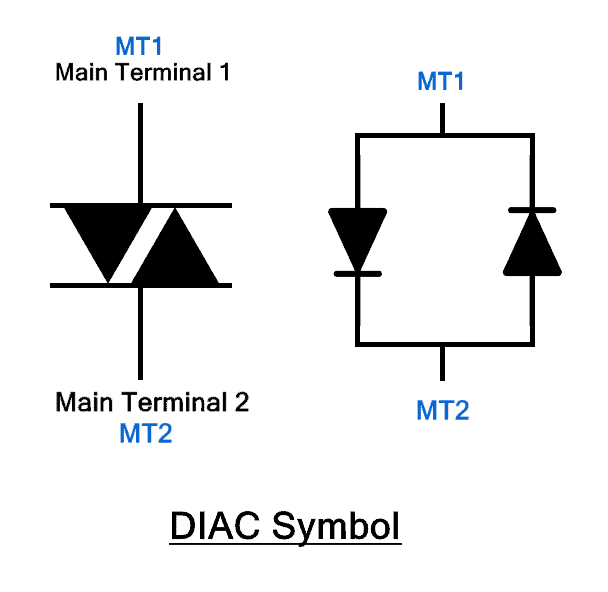 It does not have gate or controlling terminal. Instead, it turns on and off by increasing or decreasing the terminal voltage above or below its break over voltage.

DIAC is a five layer device from the combination of two antiparallel SCR without the gate terminals. It has only two terminals MT1 and MT2. It has symmetrical structure from both terminals having equal width of the regions as well as its doping percentage. 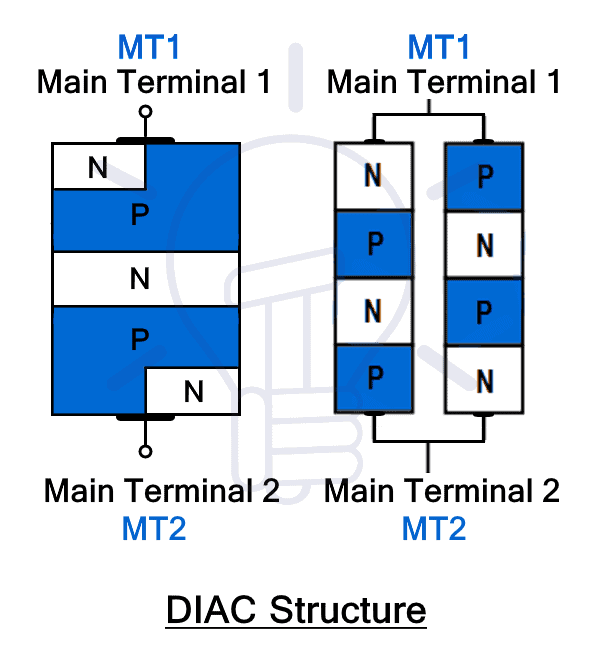 DIAC can be constructed in 3-layer and 5-layer symmetrical structure. The 3-layer structure is mostly used which is made by either sandwiching N or P between its alternating layers forming PNP or NPN structure. The break over voltage of such DIAC lies around 30 volts.

The DIAC can conduct current in both directions unless the applied voltage falls below the break over voltage. 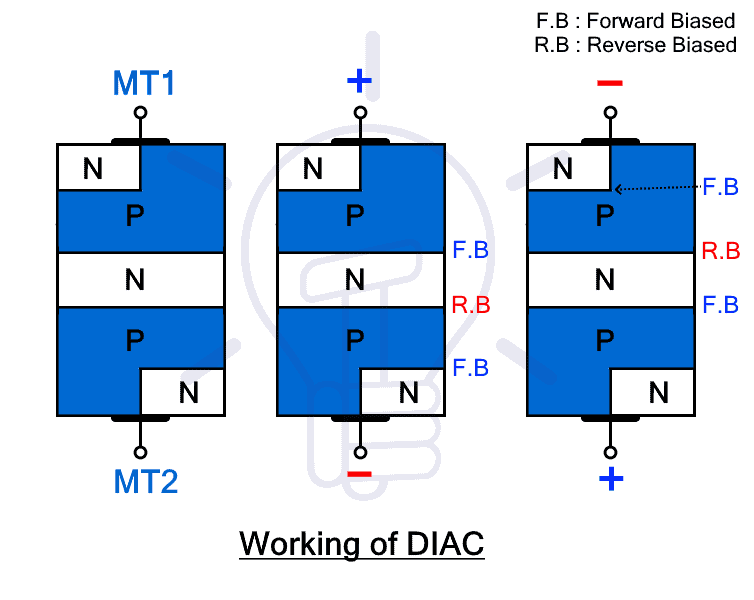 In order to trigger the DIAC into conduction, the applied voltage V must exceed break over voltage VBO. When it happens, avalanche break down occurs at the reverse bias junction and the current starts to flow through it. The DIAC is triggered into conduction and the voltage across it reduces to ON-state voltage drop.

The following characteristic curve shows the relation between the main voltage and main current of a DIAC. As you can see, the DIAC only operate in 1st and 3rd quadrant. It is a symmetrical device; therefore, the graph is symmetrical in both quadrants forming the shape of letter “Z”. 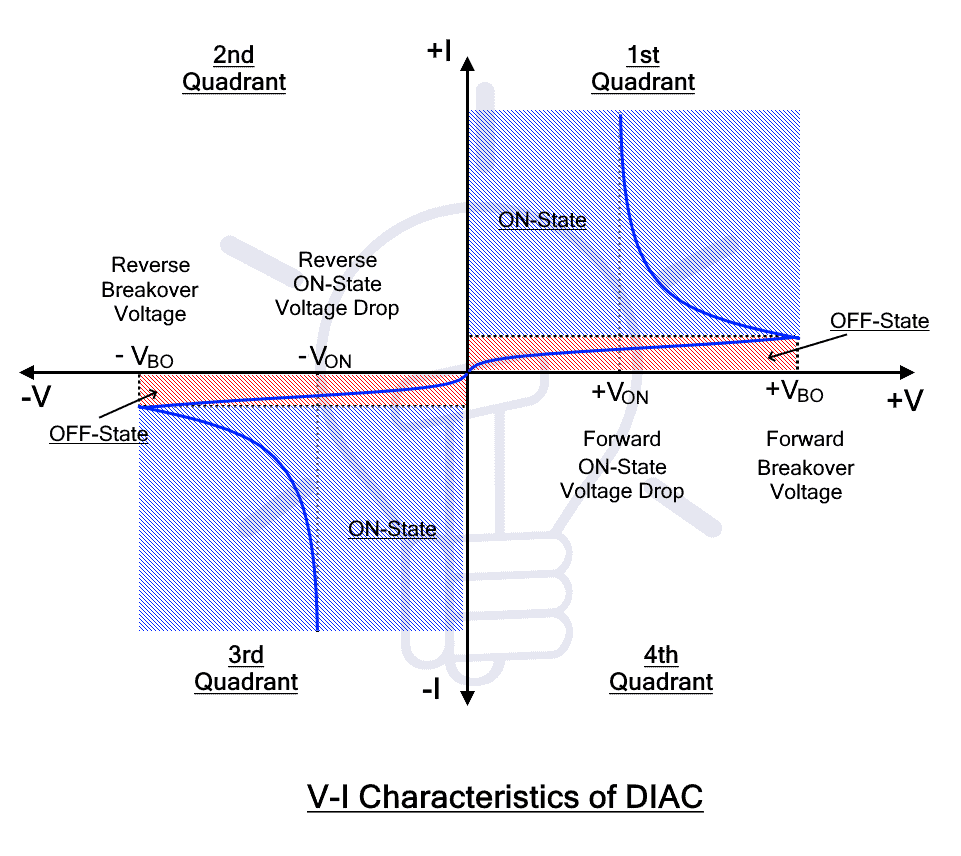 In 1st quadrant, the voltage and current are positive. As you can see, when the voltage is below the break over voltage VBO, the DIAC blocks the current except for the leakage current. The device remains in OFF-state. Once the voltage increases, the DIAC triggers into ON-state and the current rises. The voltage across the device starts to reduce to steady ON-state voltage.

The device operates similarly in the 3rd quadrant. The only difference between the 1st and 3rd quadrant is that the voltage and current are reverse. That is it.

Here are the advantages of DIAC:

The main application of DIAC is to trigger TRIAC. TRIAC has asymmetrical triggering due to difference in both halves of its structure. Due to this asymmetry, it does not trigger at the same voltage for forward and reverse current. The asymmetrical switching generates harmonics in the system. Greater the asymmetry, greater the harmonics. Harmonics causes numerous problems in a system and must be reduced.

The DIAC is connected in series to the gate of the TRAIC. Since the DIAC has equal forward and reverse break over voltage, it switches on when the voltage exceeds VBO in either direction. It triggers the TRIAC for both half of the AC cycle at equal voltage level offering symmetrical triggering.

It is a low power device and it is not suitable to regulate power on its own but with the combination of TRAIC, it can regulate high power circuit such as in motor speed control, heat control, dimmer etc.

What is TRIAC? Symbol, Construction, Working and Applications