What is Power Electronics?

It is a field where equipment and devices are working on the principles of electronics but at a higher power level. In power electronics, a considerable amount of electrical energy is processed as compared to the processing of signals and data in the case of electronics engineering.

The electrical energy is processed and controlled by supplying the voltage and current in a form that is suitable according to the load demand. In a short sentence, if some might ask you, power electronics is a field where principles of electronics are applied for the control and conversion of electrical energy at a higher power level. 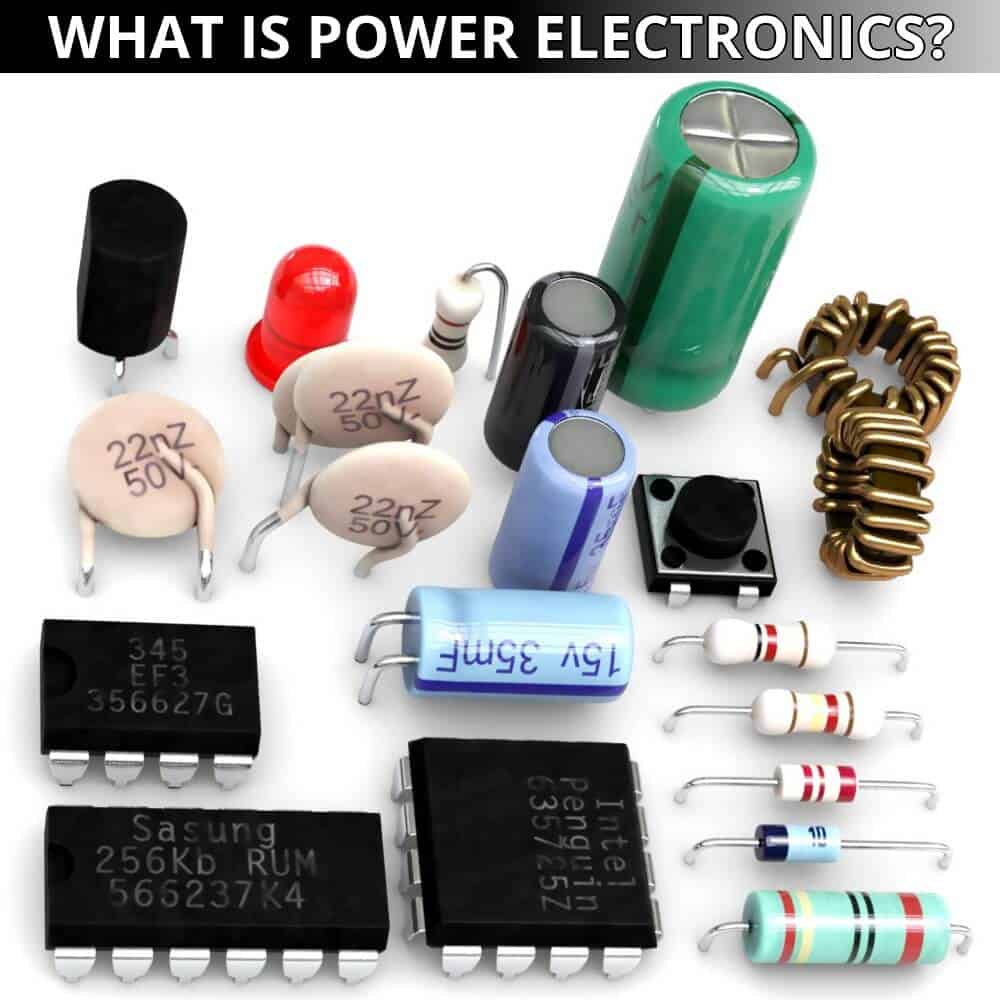 For example, if a DC motor is connected as a load then the output voltage must be controllable to control the speed of the motor, or in the case of a three-phase induction motor, the circuit should have adjustable frequency and voltage at the output. The power flowing through such a such may be reversed and thus the roles of the input and the output will be interchanged.

The controller is a “Digital signal processors”, research and development in microelectronics have made it possible to develop such controllers. Further, the development in semiconductor technology has improved the power handling capability and switching operation of the modern power electronics systems.

It becomes uneconomical as the high amount of energy is wasted and also it becomes difficult to remove the heat that is generated due to the dissipation of energy. The electrical transformer on the other hand is heavy which overall increases the size of the system.

As an example, consider the circuit in figure 2 which provides a regulated output voltage VO to the load. The input voltage from the utility is 240 V AC and the output at the load is around 5 V DC.

To provide isolation between the utility input and the output a line frequency transformer is used to provide electrical isolation and to step down the input line voltage to the required level. The AC to DC converter (i.e. the rectifier) converts the secondary low voltage winding AC output of the transformer into DC where further a capacitor is used to reduce the ripple content in the DC voltage VD.

This voltage waveform depends on the utility voltage magnitude which is usually around ± 10 % range of the nominal value of the utility voltage. It is important here to note that the line frequency transformer’s turns ratio is selected in such a way that the value of converted DC voltage VD is always greater than the regulated output voltage VO (i.e. VD > VO).

Now with this available input DC voltage VD which is connected in parallel across the resistive load and the transistor, the transistor is controlled in such a way that it creates a voltage drop VT across it to provide the resistive load with the desired regulated output voltage VO (VD = VT + VO). Thus, the transistor operates in the active region as a variable resistor which eventually results in power loss, generation of heat, and loss of efficiency of the entire system.

In the case of power, electronics take an example of the circuit shown in figure 3. In this circuit, without the utilization of a line frequency transformer the utility AC input is converted into DC voltage VD. Unlike linear electronics here the transistor operates in ON and OFF state at a very high frequency called switching frequency.

It is due to this high switching frequency in the circuit that the rectified DC voltage VD is converted in AC voltage (as the switch turns ON and OFF at high frequency the polarity of the voltage that appears across the windings alters). This helps in the use of a high-frequency transformer for the electrical isolation and voltage step down.

Now from the waveforms in figure 5, it can be seen that the Vo is the average output voltage as,

Now from the above equation 3, it is clear that the value of the output voltage can be changed by changing the ratio of ON time / Period of the cycle, and this ratio is called the duty cycle D of the switch. The ON time tON is varied and the frequency fS of the period TS is kept constant.

Thus, in power electronics due to the high-frequency switching operation of the transistor as compared to the only active region operation in linear electronics the power loss is minimized.

Certainly, there is a power loss when the switch operates at high frequency from ON to OFF state and vice versa. But it is proportional to the switching frequency which is far less than the losses that occur in the linear electronics system. With the higher frequency of operation, the weight and size of the transformers and the filter components in the system are minimized resulting in a compact assembly. But the cost of such high-frequency transformers and filters increases with the increase in switching frequency.

Parameters of a Solar Cell and Characteristics of a PV Panel