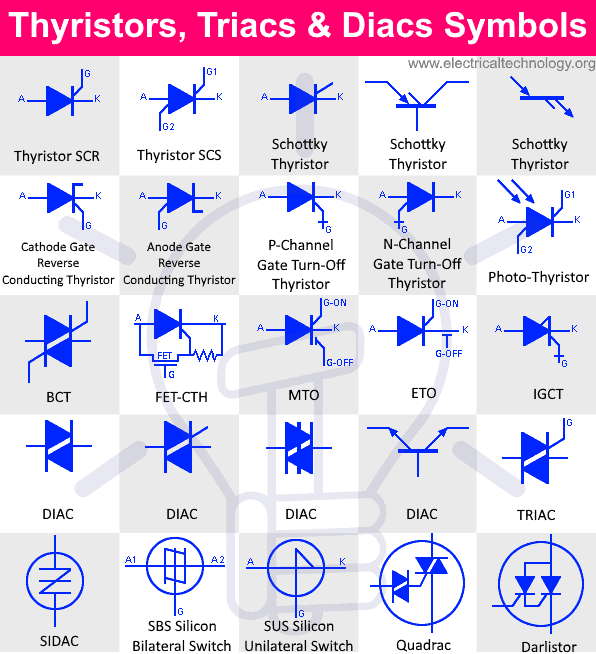 SCR stands for silicon controlled rectifier are a 4 layered PNPN semiconductor device. It has three terminals Anode, Cathode & Gate.  Just like a diode, It is a unidirectional device but with a gate control input for triggering the SCR. It starts conduction when the line voltage increases above the forward breakdown voltage or by applying current to the gate.

It is the symbol for a reverse conducting thyristor. it is a simple SCR with a diode connected in antiparallel for conduction in reverse bias. RCT also conduct in reverse direction and are used in compact design where freewheeling diode is necessary or if there are inductive loads. The cathode gate is used for starting the current flow in forward direction.

This symbol represents a reverse conducting thyristor (RCT) with an anode gate. The anode gate is used for stopping the current conduction when supplied with enough current. The RCT in used for conduction in reverse direction when there are inductive load or there is need for freewheeling diodes.

Gate turn off thyristor is a type of thyristor having the ability to turn off by applying a negative voltage pulse through the same gate. Otherwise, the turn-on conditions are the same as a generic thyristor but because of its non-latching nature, you have to maintain 1% of its turn on pulse to keep it in conduction state. The cathode gate GTO starts conduction with positive pulse & turn off with negative pulse

It is a gate turn off thyristor but with an anode gate. It also switch on & off using the same gate terminal. The anode gate allows the gate to stop conduction when a positive gate input is applied & starts conduction using a negative gate input.

Photo thyristor or LASCR (Light activated Silicon Controlled Rectifier) is a type of thyristor that is triggered into conduction mode when a it is exposed to light. The gate however operate as a normal SCR but it is left disconnected when used in photo applications.

BCT or bidirectional phase-Controlled Thyristor is made up of two SCRs connected in anti-parallel combination & integrated onto a single package. It has two separate gate terminals, one for each thyristor.  There are no Anode or Cathode terminals but only Main terminals. The gate controls the current flow through the individual SCR.

FET controlled thyristor is a made up of an SCR and a MOSFET in a single package. The MOSFET is used for triggering the SCR but there is no turn off capability. The MOSFET provides electrical isolation between the triggering circuit and the switching line.

MTO or MOSFET TurnOff thyristor is a modified form of a GTO & is made up of an SCR & MOSFET. The MOSFET is used for stopping the current conduction. MTO has two separate gate terminals i.e. turn-on gate & turn-off gate. GTO has a limitation, it requires a high current pulse its turn off function while MTO can turn off using only voltage level.

ETO or Emitter Turn-off thyristor is fast switching thyristor made of N & P-MOSFET & an SCR. The MOSFET is connected in series & between the gate & cathode terminal of the SCR. The MOSFET grants the ability to turn off faster by removing the residual carriers from the SCR.

The name DIAC is made up of Diode AC switch. it is bi-directional semiconductor device with the analogy of a two diodes connected in antiparallel combinations. It can conduct current in both directions when the voltage increases from its certain breakdown voltage limit. They are mostly used for triggering the TRIAC by connecting it in series with its gate terminal.

The name TRIAC is made up of Triode for Alternating Current. it is a modified version of SCR that can conduct and also control the current flow in both directions. The gate input is used for triggering the conduction in each direction. It can switch high AC current & voltages. They are used in dimmer applications & motor speed control etc.

SIDAC stands for Silicon Diode for Alternating Current is a similar device to the DIAC but it has relatively high breakover voltage & current handling capabilities. It is a bi-directional semiconductor device made of 5 layers to handle high voltages and current. it is essentially a TRIAC without a gate terminal.

SBS or Silicon Bilateral Switch is a triggering device used as the triggering element for TRIAC. It has the same electrical properties as a DIAC but they have lower breakover voltages. It can conduct is both direction

SUS or Silicon Unilateral Switch are semiconductor device that are used as triggering element. They are used for triggering SCRs. It is made of an SCR with a Zener diode that determines the triggering voltage.

Quadrac is a made of a DIAC & a TRIAC embedded into a single package. The DIAC is used as a triggering element for the TRIAC in this package. The Quadrac are used in compact electrical circuits where it can save space & time by using a single package instead of using discrete parts.

The Darlistor is a fast high power thyristor with very high commutation capabilities as compared to a generic thyristor. it can block high voltages & conduct heavy current with very high frequency ranging between 50Hz – 10 KHz.