What are Harmonics and How to Filter and Eliminate it.

The quality of electrical power supply is an important issue both for utility companies and users, but that quality may affected by electromagnetic disturbances.

Among these disturbances it must be highlighted harmonics that happens in all voltage levels and whose study, calculation of acceptable values and correction methods are defined in IEC[1] Standard 61000-2-4: Electromagnetic compatibility (EMC)[2] – Environment – Compatibility levels in industrial plants for low-frequency conducted disturbances. 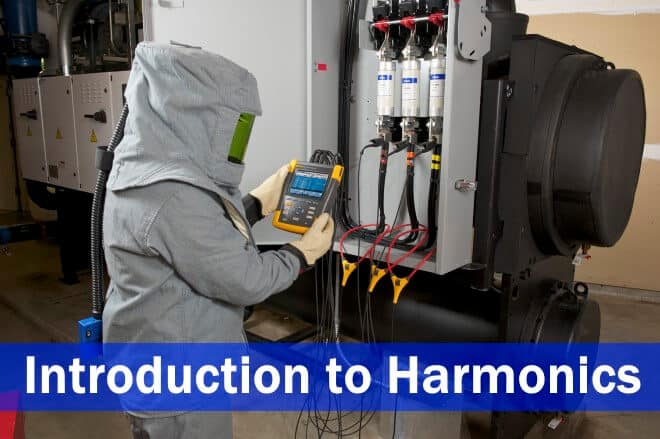 Alternators produce alternated voltages (V) and currents (I) with a sinusoidal wave form and a frequency (f) of 50 Hz or 60 Hz (this frequency, the first harmonic, is usually designated by industrial frequency or fundamental), what can be observed in Figure 1.

We can say then that harmonics are continuous (steady-state) disturbances or distortions on the electrical network and are a completely different subject or problem from line spikes, surges, sags, impulses, etc., which are categorized as transient disturbances. 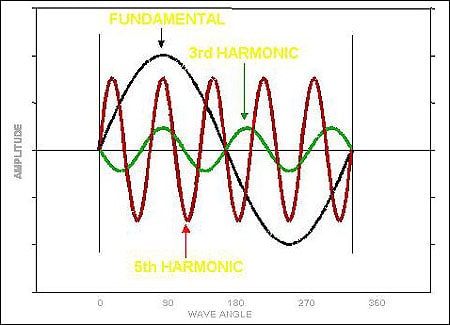 The presence of harmonics gives origin to a distorted wave of voltage (or current) that may be observed in Figure 3, taking into account that all complex waveforms can be resolved into a series of sinusoidal waves of various frequencies, therefore any complex waveform is the sum of a number of harmonics of lesser or greater value.

Fourier series[3] expresses the instantaneous value of that sum – u(t) – by the equation: 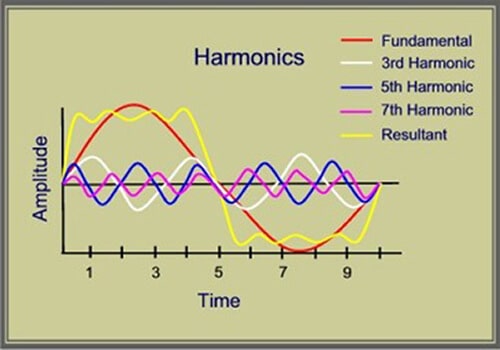 Usually 3th harmonic is the most harmful, but in certain conditions, 5th and 7th harmonics cannot be overlooked.

According to IEC Standard 61000-2-4 harmonic distortion is characterized by the parameter THD – Total Harmonic Distortion – calculated by the equation:

Usually calculations are made for the voltage, considering minimum three-phase short-circuit power (S”K) of the network and maximum values (in Ω) of short-circuit impedance in the points where THD is calculated (ZK; RK; XK[4]); a specific software is required to do these calculations.

The above referred IEC Standard defines 3 classes for electromagnetic environment[5]:

Compatibility levels of THD for each of the classes are:

Sources and Effects of Harmonics

Harmonics are a permanent source of problems in electrical equipments and systems.

The following types of loads (non-linear loads [9]) are the main sources of harmonics:

Although of a lower magnitude, under normal working conditions of equipments and of network, it must be taken into account the risk of resonance for those frequencies.

Switching operations of capacitor banks and power transformers with a permanent overload are also an important harmonics source.

Power transformers for voltages above 60 kV with star-star connection (Yy) are equally a harmonic source. To compensate those harmonics, the referred power transformers must have a tertiary winding, delta connected.

Apart from the distortion of voltage wave, harmonics are an origin of erroneous operation of control and protection systems, due to electromagnetic interferences, increase skin effect [10], cause mechanical oscillation and vibrations of electrical machines, namely power transformers and rotating machines, decrease power factor (cos Φ), conduce to premature ageing of insulation materials, leading to the lost of their dielectric characteristics, origin overheating and losses increasing, namely power transformers and cables, and decrease useful life of equipments.

Harmonics, which are the cause of voltage wave distortion, circulating in non-linear loads, like motors, when subjected to a variable magnetic flux, induce circulating currents (Foucault currents) in conducting materials, what decrease torque.

In unbalanced systems, harmonics may cause a neutral current higher than the vectorial sum of phase currents at fundamental frequency, leading to an overload in the neutral conductor.

Skin effect increases conductors’ resistance and therefore voltage drop and losses by Joule effect. This issue is particularly sensitive in overhead lines with a voltage above 150 kV and a length of 800 km and above. Common solution to solve this problem is to use DC overhead lines, in which skin effect does not exists.

Mechanical oscillation and vibrations of rotating electrical machines may origin shaft misalignment and destruction of stator, rotor and bearings.

Losses increase in power transformers, happens in iron losses, due to Foucault currents and hysteresis[11], which are proportional to the frequency and in copper losses, due to skin effect.

In such an installation it is crucial to verify if there is any risk of harmonic resonance caused by the specific capacitor bank harmonics. This is the first step to define the correct solution for harmonic compensation.

Once confirmed the existence of harmonics and that THD value exceeds the limit defined by IEC Standard 61000-2-4 and/or established by the utility company it is mandatory proceed to harmonic compensation; the solution to be implemented depends on the installation characteristics.

The simplest solution, used in low voltage (V ≤ 1 kV) installations, is the use of copper coils (see Figure 4) that act as high frequency filter, limit the starting current of rectifiers and restrain mutual interference. 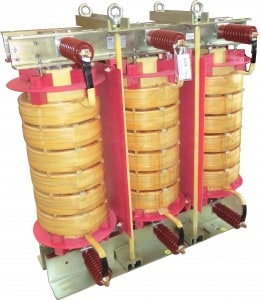 The inductance (L) of each phase is calculated by the equation: 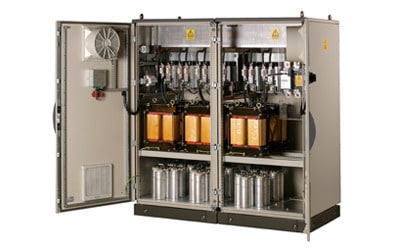 Harmonics compensation may be centralized, with harmonic filters connected in the main incoming switchboard, or de-centralized or local, installing the harmonic filters close to the equipments that are the main sources of harmonics. Both solutions are shown in Figure 6. 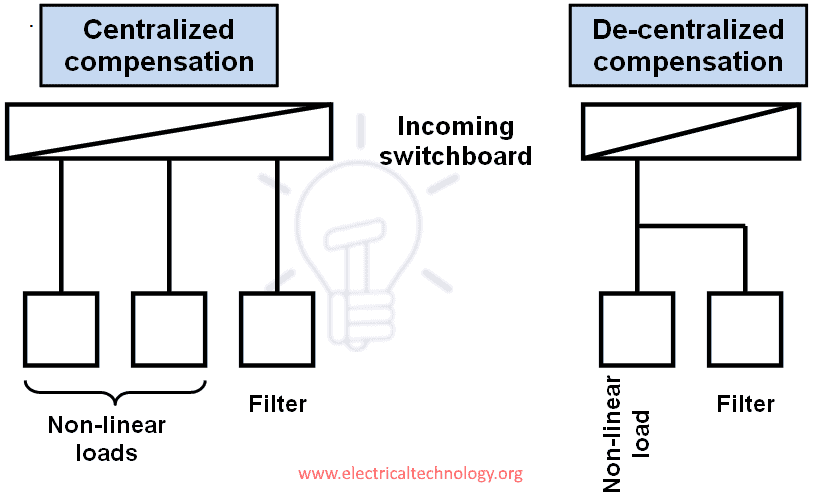 These are constituted by LC series association circuits, tuned for each one of the frequencies that they are designed to compensate, usually 5th, 7th and 11th harmonics. Their main characteristics are:

These are constituted by electronic and micro-processed units, controlling harmonics within a range between 2nd to 50th orders; for each range of frequency it is generated a current, which has a phase shift of 180° and the same value of the harmonic current to be compensated.

This type of filters is well adapted to modifications of the network, of the loads and of the harmonic range, being particularly suitable for de-centralized or local compensation.

These are a combination of active and passive filters, controlling harmonics within a range between 2nd to 25th orders, doing also power factor correction.

[4] If the values of RK e XK of the network it is usual to consider, as an approximation, RK/XK = 0.1 and the equation

[6] PCC: Point on a public power supply network, electrically nearest to a particular load, at which other loads are, or could be, connected.

[7] IPC: Point on a network inside a system or an installation, electrically nearest to a particular load, at which other loads are, or could be, connected.

[8] Compatibility level defines the specified electromagnetic disturbance level used as a reference level in a specified environment for coordination in the setting of emission and immunity limits.

[9] A load is said non-linear if its impedance vary with applied voltage.

[10] Skin effect is a phenomenon that can be characterized by the repulsion of electromagnetic current lines, which consequence is a tendency for AC current to flow only at the surface of conductors.

[11] Hysteresis is the by which, when magnetic field is applied to a ferromagnetic material, as the core of the transformers, the material stays permanently magnetized, even if the magnetic field is not present.

Design of Grounding / Earthing System in a Substation Grid