Fundamental Difference Between EMF and Voltage?

What is a Voltage?

The required amount of energy to move the unit charge from one point to another is known as Voltage. In other words, voltage is defined as the difference between electric potentials. It is represented by the symbol of capital “V” and measured in Volts denoted by “V” and measured by a voltmeter. 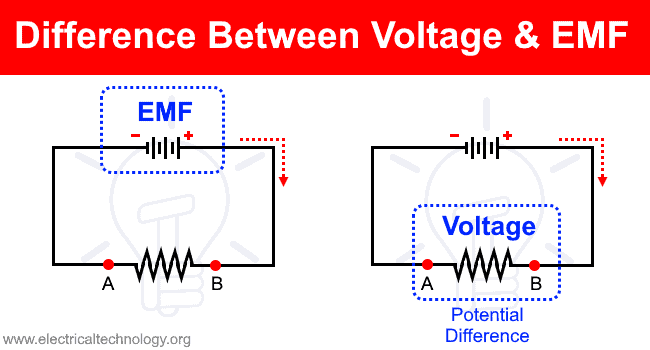 EMF or Electromotive Force is the energy supply to the charge by a battery cell. In other words, EMF produces and maintains voltage inside an active cell and supplies energy in joules to each unit of coulomb charge. It is represented by “ε” and the measuring unit is same as voltage i.e. Volt.

Comparison Chart Between Voltage and EMF.

Main Differences between EMF and Voltage

Following are the key differences between voltage and EMF.

A Voltmeter, Ammeter & Cell are Connected in Series. Ammeter shows No Deflection. Why?