The produced alternating flux  in the primary of the transformer gets linked with the secondary winding of the transformer by mutual induction as it is alternating flux in nature, there must be a rate of change of flux according to Faraday’s law of electromagnetic induction which states that if a conductor or coil links with any changing flux, there must be an induced emf in it.

Now let’s know how to find the magnitude of the induced EMF in a transformer by the EMF equation of the transformer.

Related Post: EMF equation of an Alternator or AC generator 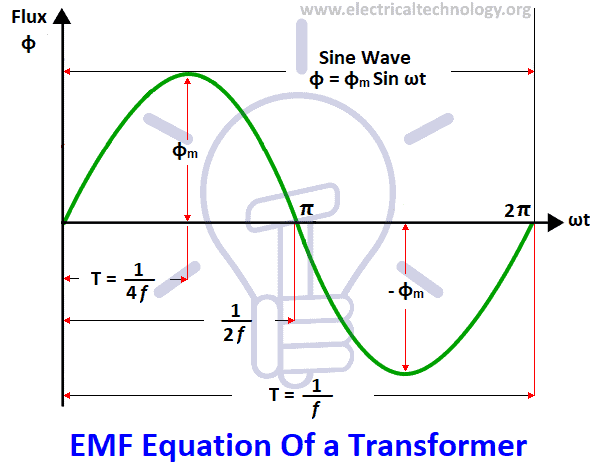 As shown in fig above- flux increases from its zero value to maximum value Φm  in one quarter of the cycle i.e. in ¼ second.

Now rate of change of flux per turn means induced EMF in volts.

If flux Φm varies sinusoidally, then RMS value of induced EMF is obtained by multiplying the average value with form factor.

Now RMS value of the induced EMF in the whole primary winding.

Similarly, RMS value of the EMF induced in secondary is,

It’s seen from (i) and (ii) that: EMF Equation of the Transformer =

It means that EMF / turn is the same in both the primary and secondary windings in the transformer i.e. flux in Primary and Secondary Winding of the Transformer is same.

Moreover, we already know that from the power equation of the transformer, i.e, in ideal Transformer (there are no losses in transformer) on no-load,

As we have derived from the above EMF equation of the transformer (iii);

The constant “K” is known as voltage transformation ratio.

N1 = Primary number of turns of the coil in a transformer.

Power Equation of the Transformer

We have already discussed it in our previous post which can be seen it here.

Transformer's Losses - Types of Energy Losses in a Transformer