Autotransformer is a special type of transformer that consists of a single winding. This winding is used for both primary & secondary (High voltage & low voltage) sides. It is widely used for its variable output voltage function, lower cost & small size.

In a conventional two winding transformer, there are two separate windings for high & low voltage side. The connection between these two windings is purely magnetic (mutual induction). It implies that there is electrical isolation between both windings.

On the other hand, Autotransformer utilizes a single winding as primary & secondary at the same time. Due to this, the input & output are connected electrically & also magnetically through self-induction. The electrical connection does include a hazard of removing the isolation between windings but this single winding provides many advantages that are discussed in this article below.

A standard autotransformer, as shown in the figure below, has one single winding around a laminated core. This single winding is used for both primary & secondary circuit. 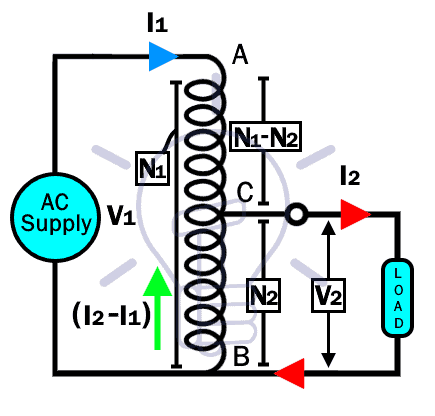 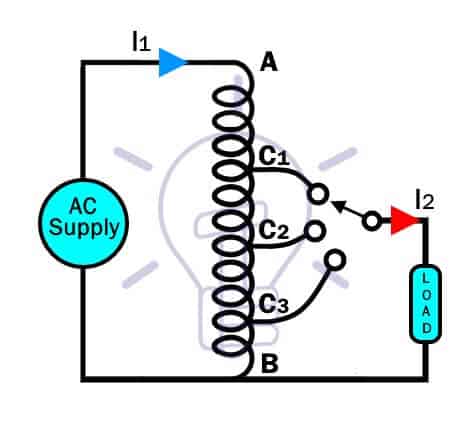 The figure above shows multiple tap points i.e. C1, C2, C3. While the other two terminals A & B is fixed.

Apart from the electrical connection between the primary & secondary, there is an energy flow through induction. That is because of the varying AC current in the winding generates a varying magnetic flux, which induces an EMF in the winding, also known as self-induction. So the output of autotransformer is a combination of energy transformation & electrical conduction, thus it has more efficiency than a conventional two winding transformer but at the cost of no electrical isolation.

This turn ratio may vary depending on the variable tap point which can increase or decrease the number of turns in the secondary N2.

Assume the transformer has no losses & the voltage supplied to the primary is V1 & the secondary voltage across to the load is V­2 then;

By varying the tap point C in the winding, we can change the turn ratio k. This will result in a variable secondary voltage. So the output voltage of an autotransformer can be varied by moving the tap point.

Such kind of autotransformer’s output voltage exceeds its input voltage & vice versa for its current. 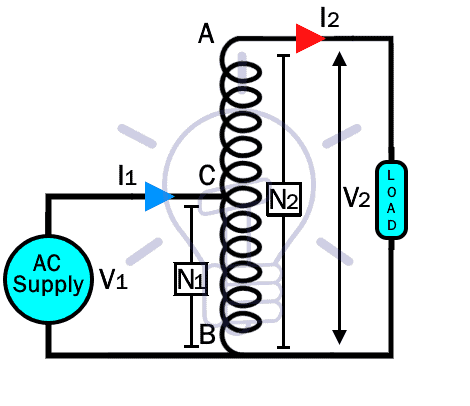 So the turn ratio (N2 / N1) becomes greater than one, which is the condition for a step up transformer.

In order to perform step down function, the connections are reversed to the step up configuration. The AC supply is connected to the fixed terminals (A & B) of the autotransformer, while the load is connected between terminals C & B. 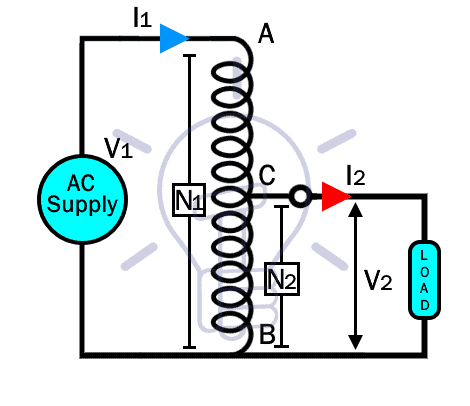 The most prominent feature of the autotransformer is its copper saving compared to a conventional two winding transformer.

Weight of copper = N x I

Where N is the number of turns and I is the current flowing through it.

Due to two different currents in the winding of the autotransformer, the winding in divided into two sections i.e. AC & CB.

The copper weight for section AC is;

I1 is the current flowing through it & (N1-N2) is the number of turns between A & C point.

The copper weight for section CB;

N2 is the number of turns between point C & B. The current (I2 – I1) however is because the Load current I2 is opposite in phase to the current I1. As we know that the output voltage decreases because of the lower secondary turns, the output current I2 exceed the primary current I1. So the results of both current become (I2 – I1).

Now the total copper weight of the winding of autotransformer, Wa is;

Now, the copper weight ratio of autotransformer to the two-winding transformer; 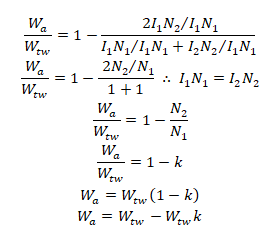 Now the difference between the copper weight of auto & two-winding transformer is;

The percentage copper saving of an autotransformer can be easily found by taking the ratio of low voltage side to high voltage side. Such as

As the voltage corresponds the turns in the winding, so the percentage copper saving can also be calculated as;

NL = number of turns on the low voltage side

NH = Number of turns on the high voltage side

Types of Transformers and Their Applications

Capacitive Sensor and Tranducer and Its Applications