What is Voltage? Electric Potential Difference and EMF Definition & Applications

You must have heard of the voltage, current & power that is associated with electricity. It is one of the basic fundamental parameter of electricity. The overhead transmission lines that possess very high voltage used to transmit power over long distance to load center (cities, homes & industries).

Any electrical power source such as batteries has its voltage mentioned on its casing such as 12V car batteries or 1.5V batteries used in gadgets. The electrical sockets in our home does provide 120/220 voltage which is supplied from utility poles.

Before understanding the voltage, we need to understand the charge. 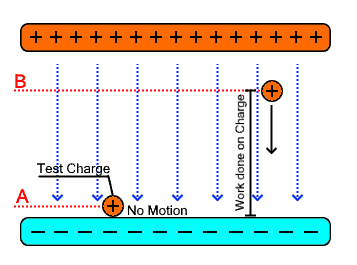 If i move the charge in opposite direction (toward the positive bar) & increase the distance between them, the work done in moving the charge from point A to point B will convert into potential energy that is stored in it. If I let go of it, the test charge will accelerate towards the negative bar.

While the second case suggests that there is some voltage which forces the charge to move in a specific direction. The voltage is the pressure or force that pushes the current inside a conductor same as the force experienced by the negative charge.

We can also use water analogy for understanding. Suppose, there is a tank of water that has a hole in its bottom so that water can flow out. The level of the water inside the tank represents the voltage & the amount of water flowing out represents current.

In electrical circuit, voltage is the force or pressure that is responsible for pushing the charge in a closed looped conductor. The flowing of charge is called current. The voltage is the electric potential between two points; the greater the voltage the greater will be the current flow through that point. It is denoted by letter V or E (used for representing electromotive force).

Voltage is also known as Electric Pressure, Electric Tension or Electric Potential Difference. There is a little bit difference between Voltage and EMF (Electromotive Force). 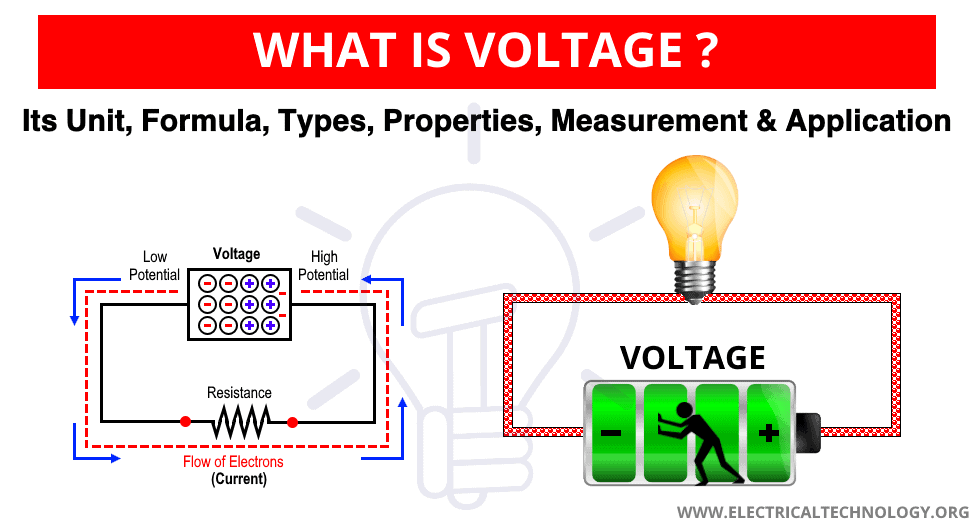 The unit of voltage is volt named after Italian physicist Alessandro Volta who invented the first battery (chemical battery to be more precise).

Volt is defined as “the potential difference between two points that allows a current of 1 ampere through it and dissipates 1 watt of power between these points”.

In other words, a “Volt” is the potential difference which moves one joule of energy per coulomb charge between two points.

For more details, check the latest post about “What is Volt (V)? Unit in Electrical Engineering and Physics“.

The potential difference or voltage & EMF are interchangeable but there is a little difference between them. You see, the voltage of a power source such as the batteries drops when they are connected with a circuit having load (resistance).

The voltage drop is due the internal resistance inside the batteries. This reduced voltage is known as potential difference which depends on the connected load while the EMF (electromotive force) is the unloaded voltage of the battery or power supply.

The potential difference is always less than the EMF and The EMF is the maximum voltage the battery can supply.

How Voltage is Generated?

The voltage is generated using various methods such through chemical reactions inside batteries, solar radiation in photovoltaic cells, & using magnetic induction in turbine generators. In either case, the power source generates potential difference across its terminals that can push the charge to flow through the circuit.

The voltage polarity is a very important point to understand the voltage. As we know, the voltage is an electric potential difference between two points. The difference suggests which of the two points has the highest potential. In other words, the voltage at a point is taken with a reference to another point.

The voltage has various types according to the nature of is polarity & voltage levels.

The direct current (DC) is a uni-directional current that flows in only one direction. Usually the source of DC supply is batteries where the polarities are clearly mentioned on it. Such sources can store electrical energy in DC form. It has fixed polarities i.e. positive & negative. Apart from ± signs, the DC voltage is denoted by dash with 3 dots (⎓) symbol.

Since the DC voltage pushes the current in only one direction, you should be careful when connecting the load using correct polarities. Reversing the polarities will damage the circuit.

In Alternating current (AC), the current direction changes continuously due to the continuous change in voltage polarities. The voltage supply in our home’s outlets has 50/60 Hz supply i.e. it swaps its polarities 100/120 times in a second. It has no consistent polarities which is why you won’t see any + or – sign on the outlets. Therefore, the load can be connected in either position. Swapping the terminals of equipment will not affect its operation. The AC voltage is denoted by a wave symbol ~.

Any equipment designed for AC cannot be operated using DC voltage & the opposite is also true. The voltage type is clearly mentioned on equipment that it is designed for.

The extra low voltage or shortly known as ELV is range of voltage below 70 volts. Such level of voltage is not harmful human body.  It is specifically used to eliminate the hazard of electrical shock. It is used in pool lighting, spa, & battery operated equipment.

The low voltage is the range of voltages that is above ELV & falls below 600v range. This voltage is usually supplied to consumer’s home & industries. The outlets in our homes supply 110/220 volts. It is not recommended to touch live wires having such voltages. Touching such voltage will give you shock & push you away if you are lucky. However, it may prove fatal in wet conditions so always be careful around it.

The high voltages range between 115 KV & 230KV. These voltages are used for power transmission between cities and from generation station to load substations.

The extra high voltage ranges between 345KV & 765 KV & they are used for power transmission over very long distance. The voltage needs to be increased to transmit over larger distances. Increase in voltage decrease the line losses occurring due to the current.

These voltages are very high & are used for power transmission over very long distances.

The high voltage direct current or shortly known as HVDC is a range of DC voltages used for efficient power transmission over long distance. as the name suggest, it is DC voltages in very high ranges. The benefit of using HVDC instead of HVAC is that it is cheaper, having very low losses for transmitting power from remote generating station to load centers that are over 600 km or 400 miles away. It is also used for underground or underwater power transmission from offshores wind farms.

How to Calculate Voltage?

Voltage can be calculated in different scenarios which depend on the available related quantities such as current in amps, power in watts and resistance in ohms etc. For a clear explanation, let see the following solved examples.

Determine the value of supply voltage if 16A current is flowing in a 1920W water heater element.

Find the value of required voltage to glow a light bulb having 10W and 10Ω resistance.

How to Measure Voltage?

We use multiple instruments to measure line parameters such as current, voltage , & resistance etc. The instrument used for measuring voltage between two points is known as Voltmeter.

The commonly available voltage to the domestics and residential consumers and home applications form utility providers are as follows in different regions:

Despite the common voltage in the US, the following voltage are also used for single phase supply systems

1-Phase Voltage in US (America)

3-Phase Voltage in US (America)

The commonly available voltage to the industrial and commercial applications form utility providers are as follows in different areas:

What Happens if We Connect a Polar Capacitor the Wrong Way?

How to Design and Install a Solar PV System?