It was the best choice to save electricity and energy consumption where only one load i.e. light bulb can be operate at a time. Nowadays, as CFL and LED bulb which consumes low energy, this type of wiring is avoided due to its complexity ignoring the power consumption. 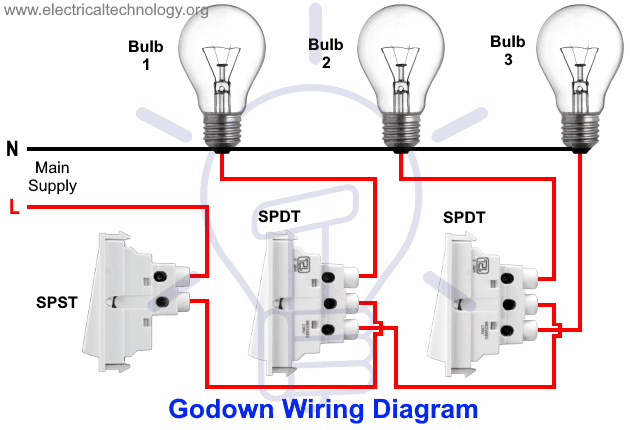 It is a linear sequence of switching i.e. When a person enter the first room or portion, all lighting points are switched OFF as the first SPST switch is at OFF position.

Switch OFF the last i.e. second SPDT, the second lamp switch ON and third lamp switch OFF and so on until he reaches to the first SPST switch and the whole circuit can be switch OFF by turning it OFF.

The working and operation of godown wiring is shown in the below animated fig.

Keep in mind that you may use many switches and lamps according to your needs while following the above tunnel and godown wiring schematic diagram. As the rating of each switch and lamps are same while only one load can be operational at once, therefore, use appropriate wire size and proper size MCB and suitable size and rating of switches according to the load rating.