Different Types of Computer Memories and their Applications

Just like a human brain, the digital devices such as computer, microcontroller & smartphone needs a space to store the information & instruction, this storage space is called memory or “computer memory” and the building block of memory is called a memory cell. In simple words, memory is an electronic circuit or device capable of storing information temporarily or permanently. 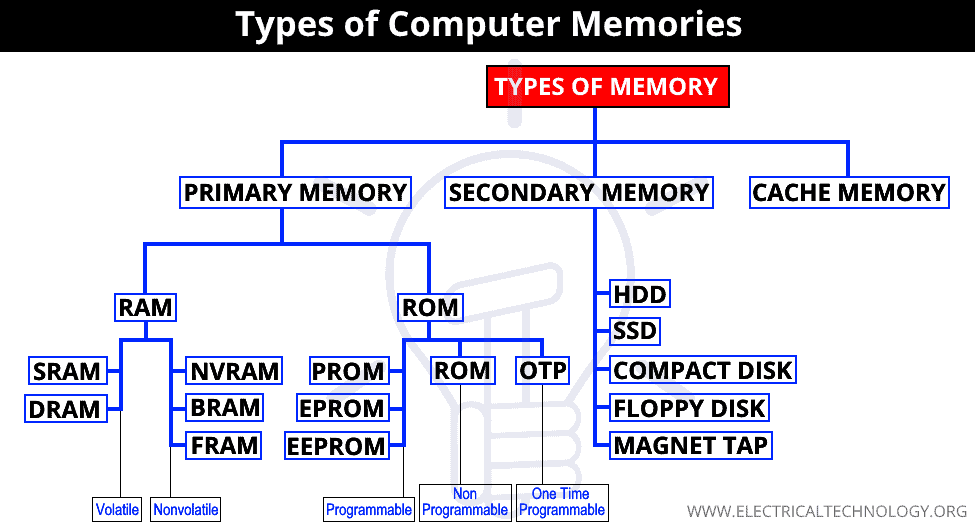 The Cache memory is the fastest type of memory that acts as a buffer to store temporary data between the processor & data memory. It stores the necessary data frequently used by the CPU so that it can easily access it. It is the most expensive type of memory & it is integrated inside the CPU chip.

The primary memory or primary storage or main memory is a type of computer memory that is directly accessed by the CPU. It allows the processor to quickly fetch & execute the instruction & commands stored in this memory.

The Primary memory stores all the necessary data on the startup so that the processor can use it when the program code needs to. It stores the data that is frequently used by the CPU. It is fast & expensive then secondary memory bearing very low storage capacity. The primary memory can store the data permanently such as ROM & temporarily such as RAM.

The Primary memory is further classified into the following two types; RAM and ROM.

The RAM is an acronym for Random Access Memory & it is a type of primary memory that stores the information or data temporarily to be used by the processor while the system is running. It is also called volatile memory because the content of the data stored in its modules is erased when the power supply is interrupted. Thus they need a constant supply of power to retain that information.

The RAM has further two types & they are briefly discussed below;

DRAM or Dynamic RAM (Dynamic Random Access Memory) is a type of RAM where the computer memory cell used for storing a bit of data is made of capacitor & a transistor. Due to the leakage current of the capacitor, the cell cannot retain the information for too long. Therefore, the DRAM needs to be refreshed or recharge after a specific time to maintain the data. 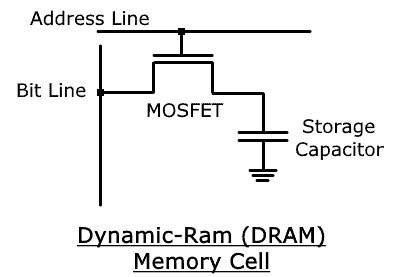 Since the memory cell of DRAM is made from one transistor, more memory cells can be designed in a single chip to increase the storage density of DRAM. And the price per cell is reduced thus they are inexpensive.

Here are some of the advantages of DRAM

Here are some of the Disadvantages of DRAM;

The DRAM is used as the main memory. It is an off-chip memory, placed externally on the motherboard.

The SRAM or Static RAM is another type of primary memory that stores it data using flip flop & latches. The flip flop is a memory cell of SRAM & it is made of multiple logic gates consisting transistors. There is no leakage current thus it does not need to be refreshed, unlike DRAM. 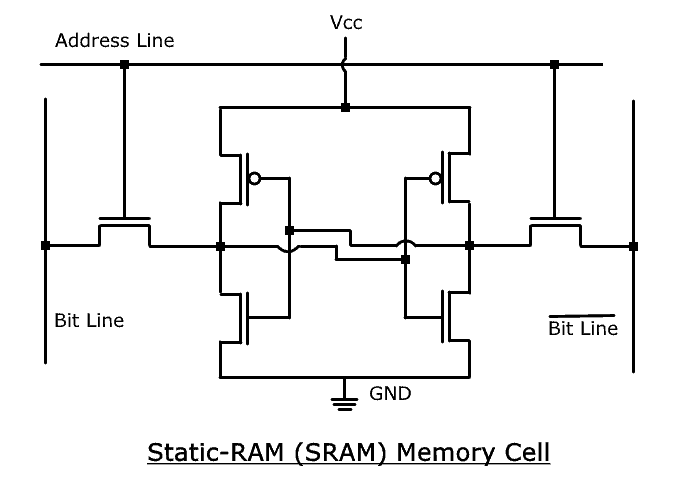 Each memory cell used for storing a single bit of data is made of 6 transistors. Thus price per bit of SRAM is more than DRAM & it requires more physical space on-chip to store the same amount of data. Therefore, the storage capacity of SRAM is lower than DRAM.

Here are some of the advantages of SRAM over DRAM

The ROM or Read-only Memory is a non-volatile type of primary memory i.e. the content of information stored does not get erased when the power is off. This data is stored during its manufacturing & it cannot be altered by any user. That is why it is called a Read-Only Memory.

The ROM is slower than RAM because the CPU cannot access its data. The data first need to be transferred to RAM where the CPU can access it. It only contains the necessary instruction regarding the startup of the system.

The ROM is classified into the following types 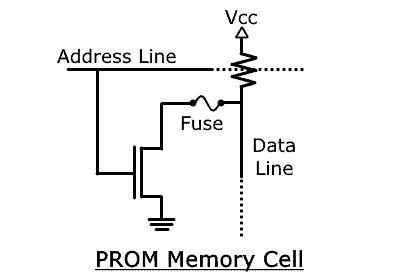 The data in each cell is stored & maintained by a fuse. During manufacturing, all the fuses are intact & read “0”. The fuse is blown using a high voltage pulse which then reads “1”.  In such a way the PROM is programmed by blowing the fuses for selected bit locations that should be “1” using a special programmer called PROM Programmer.

Since the blown or burned fuse cannot be restored, they can be programmed only once. And they can be read multiple times which is why it is a Read-Only Memory.

EPROM or also known as EROM is a modified type of PROM which is a non-volatile memory. Unlike PROM, the EPROM data can be erased once it’s programmed by exposing it to a UV (ultraviolet) light source. 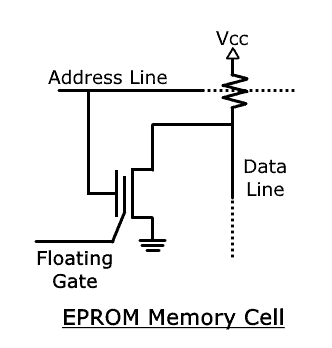 The cells are made from a floating gate transistor which is programmed by supplying high voltage that creates an avalanche discharge of electrons to store it in the gate electrode. Due to the gate insulation, the charge does not leak & is stored permanently. This process cannot be reversed using electricity but exposing it to the UV light can dissipate the charge & erase the data inside.

The EPROM chips have a quartz window for UV light penetration & they are easily recognizable. Since the whole die is exposed, there is no way to erase any specific byte of data but the whole memory is wiped clean. It needs to be removed from the circuit & place under a UV lamp. It takes several minutes of exposure to completely erase the memory.

Secondary memory is a broad term used for the computer memory that is used for storing data on a long-term basis. It is commonly known as the storage of a system. It is a non-volatile memory that can store data permanently without the need of power supply. The CPU does not have direct access to secondary memory. The data is first stored in primary memory RAM which is then accessed by CPU.

The secondary memory is also known as external memory. It has a huge amount of storage space with relatively low speed & cheaper than primary memory. It is used for backup storage.

The secondary memory is classified into fixed & removable memory;

This type of secondary memory is fixed internally in the system. Fixed memory means not be removed during the operation, it does not mean it is literally fixed. It can be removed using a proper tool kit for upgrading or replacing purposes. Here are some examples of fixed memories; HDD (Hard disk), SSD (Solid State Disk), etc.

This type of Secondary memory is often referred to as external or portable memory. This type of memory or storage device can be removed even when the system is running. It does not need any special tool to remove them.

They offer a portable form of memory that can be transferred from one system to another. They are mostly used as backup storage devices. Examples of removable memories are optical disk such as Compact disk, DVDs & Blu-ray disk, etc, that require optical drives to read them & pen drives such as USB drives that can be connected to any USB port.

Magnetic memory or magnetic storage media is a form of non-volatile secondary memory that uses any type of magnetized medium to store data. The two magnetic polarities are used to represent the “1” & “0” of the digital data.

The head moves over a circular rotating magnetic disk & reads the data in the form of magnetic polarities. Since the data is stored in a magnetic medium, the data can easily get damaged near any external magnetic field. It also cannot withstand any shock from falling. It is relatively slower & cheaper than solid-state computer memory. 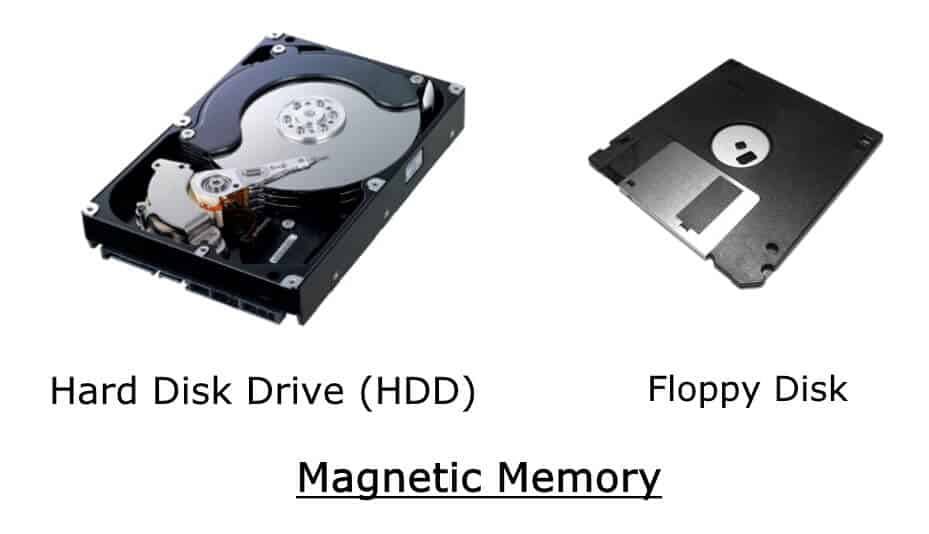 This is the most common type of secondary storage memory used in almost every computer & laptop. Examples of magnetic memory are Hard disk, floppy disk & magnetic tapes.

Magnetic memory can be fixed internally such as hard disks & portable or removable such as floppy disk & external hard drives which can be connected through a USB port.

Optical memory or optical storage as the name suggests is a type of memory that store & read the information using light. The data is stored in a removable disk called optical disk & the device used for storing & reading the data is called optical drive.

The optical drive is equipped with a sharp laser beam that is used for storing & reading the data in the form of marks on an optical disk that is spinning inside it. Back in the days, the optical memories used were read-only memories i.e. we could only access it & cannot modify the content of the disk. Nowadays, we can write them using special drives.

The solid-state memory or solid-state drive (SSD) is an electronic storage device that permanently stores data in an electronic circuit. There is no moving part such as a spinning disk or magnetic disks or read-write heads. So they are resistant to any shock from falling.

The solid-state computer memory uses flash memory which is very fast but expensive than magnetic or optical memory. They are used as a backup storage device or to transfer data from one system to another. They are compact & small in size having very low power consumption.

The SSDs are available as fixed internal storage used in computers & smartphones & as external portable memory such as pen or USB drives & memory cards.