What is a Circuit Breaker?

A circuit breaker is a device, which can

A circuit breaker is used for switching mechanism and protection of the system. Other associated devises and components are also used for this purpose associated with circuit breakers like fuses, relays, switches etc. Circuit breakers are widely used in industries as well as power system for controlling and protection of different parts of the circuit like switch gears, Transformers, Motors, Generators/Alternator etc., which leads the system stable and reliable. 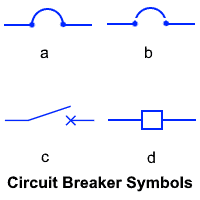 There are different types of air circuit breakers available in the market and we will discuss one by one in detail.

Related Post: Difference Between MCB & MCCB According To IEC Standards

It is operated within voltage level up to 1 KV. It contains two pairs of contact. The main pair carries the current and the contact made of copper. An additional pair of contact is made of carbon. When the breaker is opened, the main contact opens first. During opening of the main contact, the arc contact remains in touch with each other. The arcing gets initiated when arc contacts are separated. The circuit breaker is obsolete for medium voltage.

There are four types of ACBs used in the control and protection to maintain and stable operation of switch gears and indoor medium voltage.

Related Post: How to Read MCB Nameplate Data Rating Printed on it?

The circuit breaker is fitted with a chamber surrounding the contact. The chamber is known as “arc chute”. The arc is made to drive in it. The arc chute will help in achieving cooling. Arc chute is made from some refractory material. The inner walls of arc chute are shaped in such a way that arc is not only forced into close proximity, but will drive into the serpentine channel projected on arc chute wall.

The arc chute is divided into a number of small compartments by using metallic separation plates. Metallic separation plates are arc splitters and each of small compartments behave as a mini arc chute. Initial arc will split into a series of arcs this will make all arc voltages higher than system voltage. They are preferable choice in low voltage application. 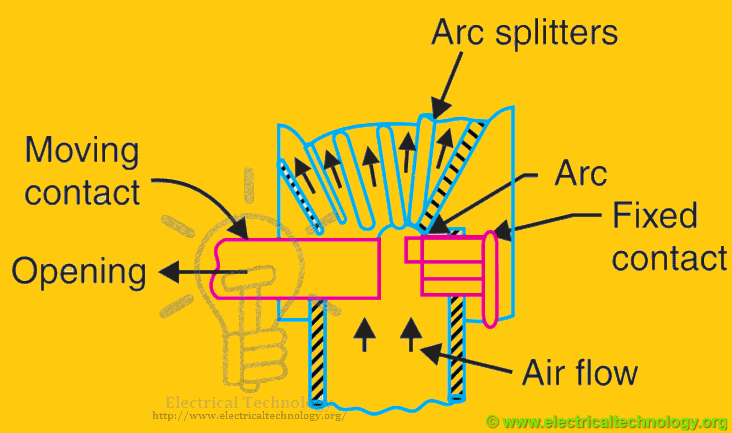 Magnetic blowout air circuit breakers provide magnetic control over the arc moment to make arc extinction within the devices. The arc extinction is controlled using magnetic field provided by the current in blowout coils connected in series with the circuit being interrupted. These coils are known as “blow out the coil”. Magnetic field does not control and extinguish the arc made in the breaker, but it moves the arc into chutes where the arc is lengthened, cooled and extinguished accordingly. These kind of circuit breakers are used up to 11kV.

This type of circuit breaker is used for system voltage of 245 KV, 420 KV and even more.

The moving contact is in contact. There is a nozzle orifice in fixed contact at normal closed condition of breaker. When a fault occur high pressure is introduced into the chamber. High-pressure air will flow through nozzle orifice voltage is sufficient to sustain. 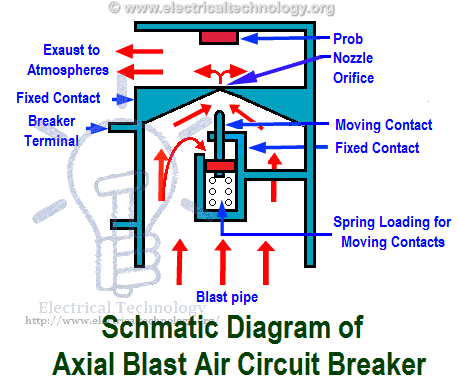 The moving contact is fitted over a piston supported by a spring. The blast transfers arc to arcing electrode. 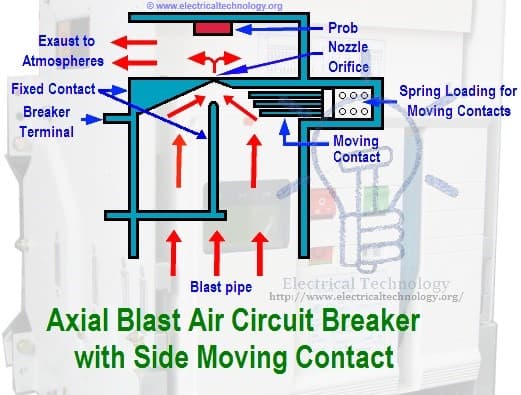 How To Calculate Your Electricity Bill. Easy & Simple Explanation.