Charging & Discharging the Battery with  Incorrect and Wrong Connection

We know that a secondary battery (also known as an accumulator) is a device that converts the chemical energy into electrical energy and stores in it for later usage. The chemical reactions in secondary cells are reversible in case of proper battery polarity connection instead of reverse polarity.

There are internal plates in the batteries (lead acid, alkaline etc) known as cathode (positive “+”) and anode (negative “-“). For example, the positive plate is Lead per oxide (PbO2) and the negative plate is sponge lead (Pb). A light sulfuric acid (H2SO4) is used as an electrolytic solution in the battery for proper chemical reaction.

The combined chemical reaction in the battery can be written as follows during the charging and discharging (or discharged and charged cell) of lead acid battery: 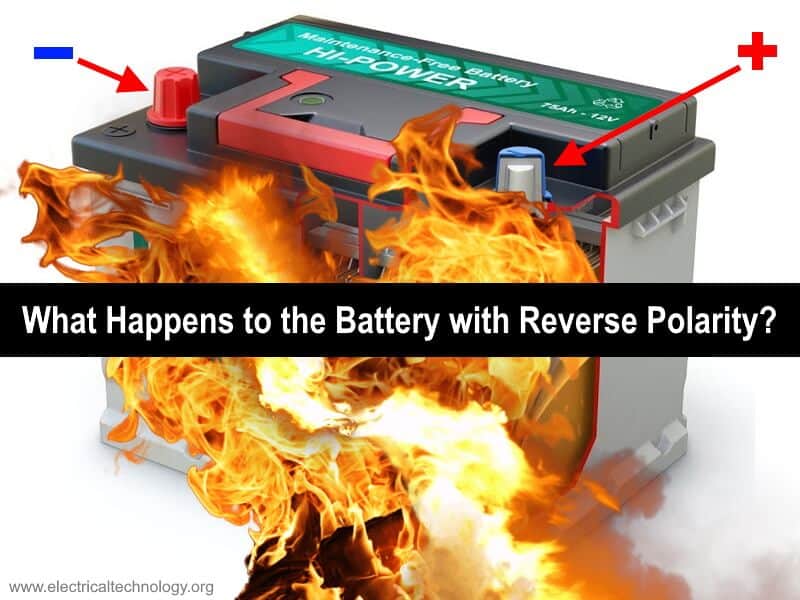 What is Polarity & Reverse Polarity in a Battery?

If we connect these both terminals through a conductor having a resistance, the current will start to flow due to the potential difference on both points. In other words, the electrons (electronic current will start to flow from the -Ve terminal to the +Ve terminal. The electrical (conventional) current flows in the opposite direction i.e. from positive electrode the negative electrode.

Battery reverse polarity is the case when the source (for charging) or load cables are connected incorrectly i.e. source or load Negative to the Positive of battery and source or load Positive to the Negative terminal of the battery. Due to the wrong connection, a current may start to flow in the circuit and may cause some serious injuries and damage to the equipment.

Enough the basic, now come to the point i.e. what happens to a battery if you recharge it the wrong way around? or what happens when charging a battery using reverse polarity with a charger?

There are three scenarios as follows

Let’s discuss one by one in detail.

Connecting a Battery to the Charger with Reverse Polarity

For these reasons, wear rubber gloves and glasses for proper protection while working on batteries.

In addition, there is an exceptional case as well where a battery may be connected to the incorrect way.

This is not always the case and wont work for all batteries due to the different pastes/materials and technique used in the batteries. While in old batteries, it may work for years but some of tested experiments reported the less efficiency & capacity, quick drainage and short life of battery. The battery charged with reverse polarity should be marked interchangeably i.e. the battery (+) should be marked as (-) and vice versa. To reverse the action as prior, fully discharge the (reversed charged) battery and connect it to the right terminals (i.e. negative to the negative and positive to the positive terminals of charger and battery respectively).

Again, wear the rubber gloves and glasses and other safety measures for proper protection while playing with batteries.

Connecting Battery to the Load with Reverse Polarity

The same case i.e. battery connected to the wrong way but load appliances instead of charger. This may lead to the following phenomena:

Nowadays, the modern vehicle manufactures put a reverse polarity protection in the system as it is easy to manage it instead of the useless and number of support calls and maintenance. But is it OK and satisfied to give it a try? Not at all.

In addition, a fuse or a generic diode (Voltage drop up to 0.7V across the diode will occur) can be installed on the positive wire for one direction power supply which acts a reverse current protection.

Connecting a Battery to Another Battery with Reverse Polarity

If a battery in the first car is connected wrongly to the battery placed in another car to charge the second battery through the first one, it may explode and burn or permanently damage the battery(ies). The common batteries as lead acid may heat up and melt the internal and external parts in the battery. The ignite gas as hydrogen may crack the battery casing with exploration.

In case of a wrong connection of batteries instead of proper series connection, both the batteries will oppose each other hence the result will be equalized charged on both i.e. they will quickly flatten each other.

It may also melt the jumper cable and insulation connected between the two batteries as it is not designed or rated for a huge amount of electric current due to the incorrect connection.

Now its your turn, please express your feeling and real time experience with the batteries reverse polarity connection in any aspect. We really want to know your taught on this topic.

Difference Between Grounding, Earthing and Bonding

What Happens if a Battery is Connected to the AC Supply?