Why Parallel Connection is Mostly Preferred over Series Connection?

The use, application and importance of series and parallel circuit connection today cannot be over emphasized. The application of series and parallel circuit connection can be evidently seen in our homes, school halls and in our street lights. With the press of a button, all the Bobs in our sitting rooms are turned on. some refer that the bobs in their homes should have different switches.

In series connections, the same current flows across all the branches of the circuits, but different voltage across it thus making the resistors to have different voltage across them. Each resistor or load will experience a voltage drop. The applied voltage is equal to the sum of the voltage drop across the different parts of the circuit. Voltage drop is proportional to the resistance current being the same throughout the circuit. When loads are connected in series, the loads will tend to have a common switch. This kind of connection is employed in school halls, street lights.

Some people connect security lights in their homes in series which will make them to have common switch. The problem with this kind of connection is that when a load develops a problem, the other connected system will fail. It’s an all or none type of circuit connection. Till a load gets energy before it delivers it to the other and the one to deliver fails, there will be a black out.

Parallel circuit connection have the same voltage flowing across all the branches of the circuits. Different resistors have their individual currents.

Parallel circuit connection is very common in use. Various lamps and electrical appliances in our homes are connected in parallel so that each of the lamps or bobs and appliances can be operated independently. For us to have control over the individual lamps or loads, they have to be wired in parallel.

Related Post: Which Bulb Glows Brighter When Connected in Series and Parallel & Why?

Comparison Between Series and Parallel Connection

Below in the given table, the main differences between series and parallel connections are shown. 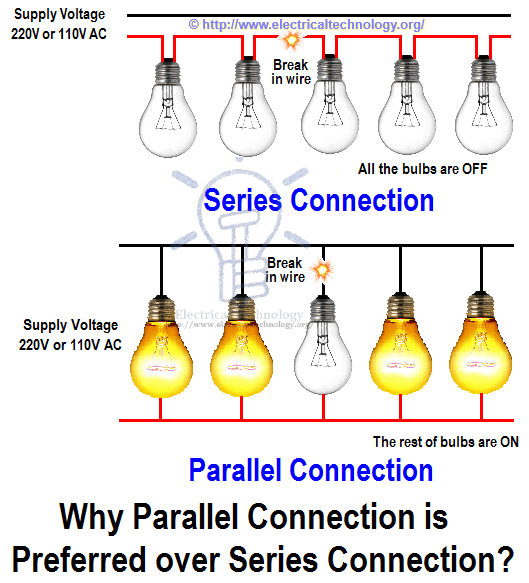 When a fuse gets burnt for instance due to high current, then the appliance it protects will not be damaged because current will no longer reach it. While series connection is an all or none, parallel circuit connection gives you the opportunity to give the loads and the appliances their individual switch. Parallel connection offers resistance to the flow of current compared to series connection.

Insulation Resistance of a Cable | Why Cables are insulated?

Fault Current Limiter and Their Types