Parameters and Characteristics of a Photovoltaic Cell

What exactly is a Solar Photovoltaic Cell?

A solar cell is a semiconductor device that can convert solar radiation into electricity. Its ability to convert sunlight into electricity without an intermediate conversion makes it unique to harness the available solar energy into useful electricity. That is why they are called Solar Photovoltaic cells. Fig. 1 shows a typical solar cell. 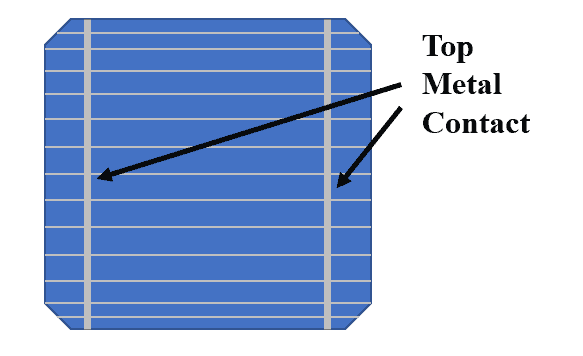 Various factors govern the electricity generated by a solar cell such as;

Working of a Solar Cell

Thus, the separation of these two charges creates an electric potential difference and we get a voltage across the cell’s terminal. This voltage is used to drive the current in the circuit.

The conversion of sunlight into electricity is determined by various parameters of a solar cell. To understand these parameters, we need to take a look at the I – V Curve as shown in figure 2 below. The curve has been plotted based on the data in table 1. 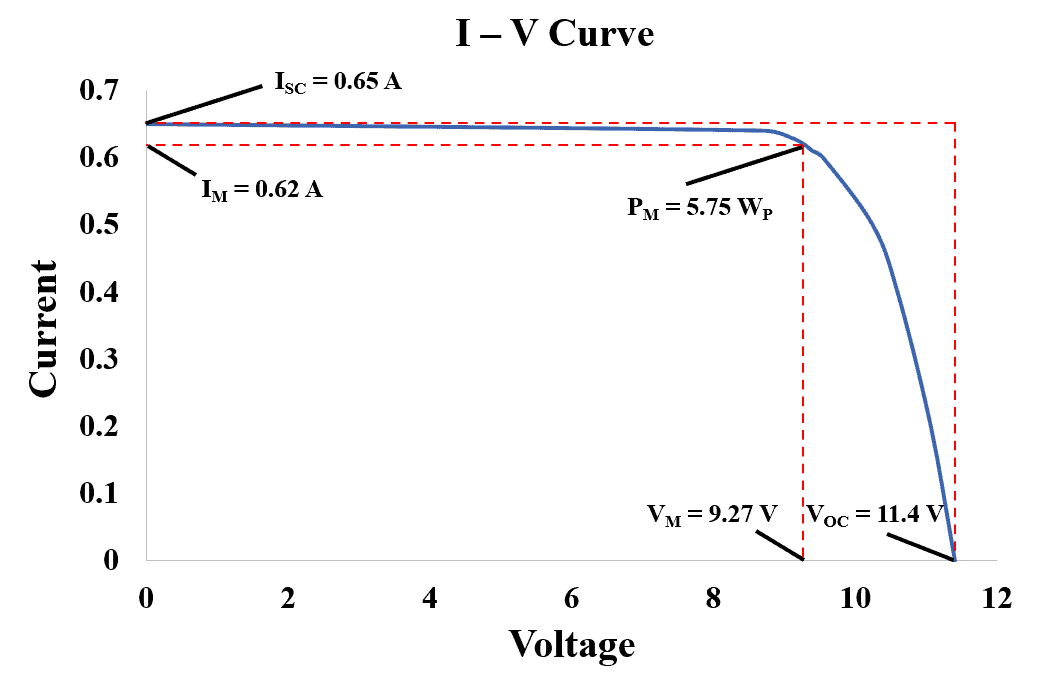 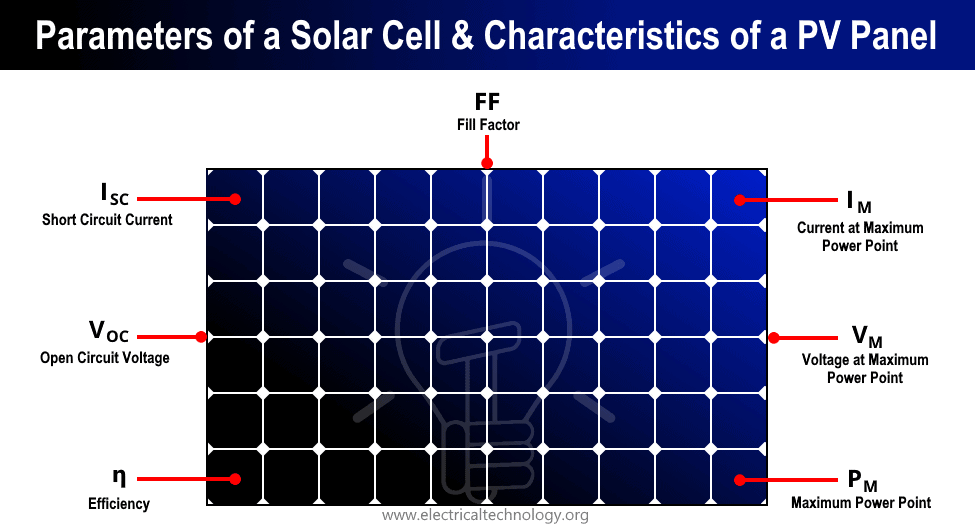 Short circuit current is the maximum current produced by the solar cell, it is measured in ampere (A) or milli-ampere (mA). As can be seen from table 1 and figure 2 that the open-circuit voltage is zero when the cell is producing maximum current (ISC = 0.65 A).

Let’s take an example, a solar cell has a current density of 40 mA/cm2 at STC and an area of 200 cm2. Then the short circuit current can be determined as follows;

Open circuit voltage is the maximum voltage that the cell can produce under open-circuit conditions. It is measured in volt (V) or milli-volt (mV). As can be seen from table 1 and figure 2 that the short circuit current is equal to zero when the cell produces maximum voltage. The value of VOC depends on cell technology and the operating temperature of the cell.

The cell can operate at different current and voltage combinations. But it can only produce maximum power PM at a particular voltage and current combination. As shown in figure 2 the maximum power point is at the knee of the I – V curve and is the product of IM and V

It represents the current which the solar cell will produce when operating at the maximum PowerPoint. It is denoted by IM and can be seen in figure 2 that its value is always less than the short circuit current (ISC). It is measured in ampere (A) or milli-ampere (mA).

It represents the voltage that the solar cell will produce when operating at the maximum PowerPoint. It is denoted by VM and can be seen in figure 2 that its value is always less than the open-circuit voltage (VOC). It is measured in volts (V) or millivolts (mV).

Based on the data in table 1 and figure 2 we can determine the fill factor as follows;

Represented in percentage by multiplying it by 100.

Represented in percentage by multiplying it by 100.

A wide variety of solar cells are available in the market, the name of the solar cell technology depends on the material used in that technology. Hence different cells have different cell parameters like short circuit current density, efficiency, open-circuit voltage, fill factor, etc. The following table 2 shows the list of commercially available cells and their parameters value range.

Not all the light falling on the solar cell is converted into electrical energy. Conversion efficiency is referred to as the ratio of electrical energy generated to the input light energy. We cannot change the efficiency of the cell, based on the manufacturing process and the material used in it and its value remains fixed.

Solar cell maximum power PM depends upon the voltage that it develops across the cell terminal and the current it can supply. The cell area is one of the important factors that affect the output power developed by the cell. The value of the output power can be determined for a given input power in (W/m2), cell’s conversion efficiency in (%), and area of the cell in (m2).

The solar cell efficiency is given under STC and the input power (PIN) is taken as 1000 W/m2. Thus, by using the formula given below we can determine the output power generated for different efficiencies.

And for 25% efficiency we get;

Related Post Types of Solar Panels and Which Solar Panel Type is Best?

As we saw before that the current density is obtained by dividing the current by the area of the cell. The current density (JSC) is fixed for a given sunlight intensity and it does not depend on the area. Let’s take an example where we have to calculate the output current of the solar cell having an area of 20 cm2 and 50 cm2.

Having a constant current density of 35 mA/m2. The output current for 20 cm2 can be calculated as follows;

The output current for 50 cm2 can be calculated as follows;

When the light falls on an angle greater or lesser than 90o some part of the light is reflected, and the light utilized by the cell less than the actual falling on it. This results in a reduction of the output power generated by the cell. It is due to this reason that we must install the solar cell at an angle perpendicular to the falling light to generate maximum possible electricity.

From the above calculation, it can be concluded that there is a decrease in the output voltage if the temperature rises above STC (i.e. above 25oC).

It is due to development in the semi-conductor technology that we can convert abundant solar light into electricity. In this article we studied the working of the solar cell, different types of cells, it’s various parameters like open-circuit voltage, short-circuit current, etc. that helps us understand the characteristics of the cell. The factors affecting the power generated by the cell were also studied including power conversion efficiency, amount of input light, cell area, etc. that affects the performance and helps us understand the behavior of the cell under a different scenario. With the understanding of solar cell technology, we can utilize it in the best possible way to fulfil our day to day energy requirements.

How to Design a Solar Photovoltaic Powered DC Water Pump?