What is Electrical Interlocking?

A simple electrical interlocking control diagram is shown below. 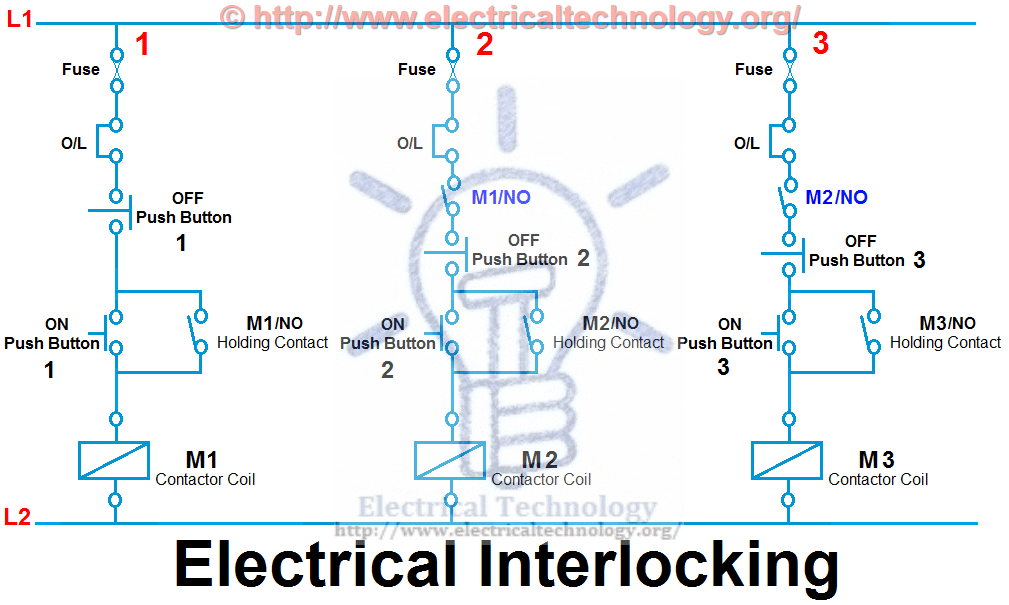 When we push the ON-1 button to energies the M1 Contactor (or starts M1 Motor), then circuit complete through Fuse, Overload relay’s trip link, OFF Push -1 and ON Push 1. And motor M1 Starts to run.

As Contactor M1 energies, it’s all normally Close (NC) links open and the other normally open (NO) links used in the circuit close.

When m1 energies, the normally open (NO) link will be closed immediately, which is in parallel with ON-Push 1. This is called Holding link i.e. it holds the motor in start condition. Now, Motor will still run even we leave (disconnect to stop) the ON-Push 1.

A normally open (NO) link is also used in line 2. When M1 energizes, this link (NO M1 in line 2) will be also closed, therefore, M1 Motor will start to run, this way, supply also will reach to ON Push 2. Now, if we press ON-Push 2, then second motor M2 will be also started to run, in addition, the normally open (NO) links of the connected contactor M2 in the circuit would be also closed immediately. And Holding would be occurred through M2 link which is in parallel with ON-Push 2. This way, Motor 2 will start to run.

In each control circuit, control fuse, and overload relays are connected for short circuit and overload protection respectively.

you may also read:

In short, we may change the motors operation and control by doing some modification in the above simple electrical interlocking control circuit diagram. For example, if we need that Motor 1 should stop when Motor 3 starts to run, then we may use a Normally Close (NC) link of M3 in line 1. This way, when Contactor M3 energizes, and motor 3 starts to run, then the normally close (NC) link of Motor 1 connected in line 1 will open immediately (after energizing the M3 Contactor) which cause to de-energize the M1 contactor, hence, Motor M1 will stop.

We may also configure the above electrical interlocking control circuit with little modification for star and run each motor individually.

Below is another electrical interlocking control circuit diagram.

How to test a battery with Test meter?