Please don’t kill me to mention the surprise MVA rating of a circuit breaker as we all have heard about the 500 or 1000 MVA circuit breakers. These ratings won’t appear on recent models as it was the old logic and things have been changed now. To clear the basic concept and know what exactly happened to the rules, lets see the following explanation. It is actually the breaking capacity (not breaking current) of circuit breaker which is now expressed in kA instead of MVA (as it was before).

Before we go in details, let’s know what exactly a circuit breaker do and what are the different types of rating of CBs.

A circuit breaker is a control and protective device used for switching mechanism and protection of the system which: 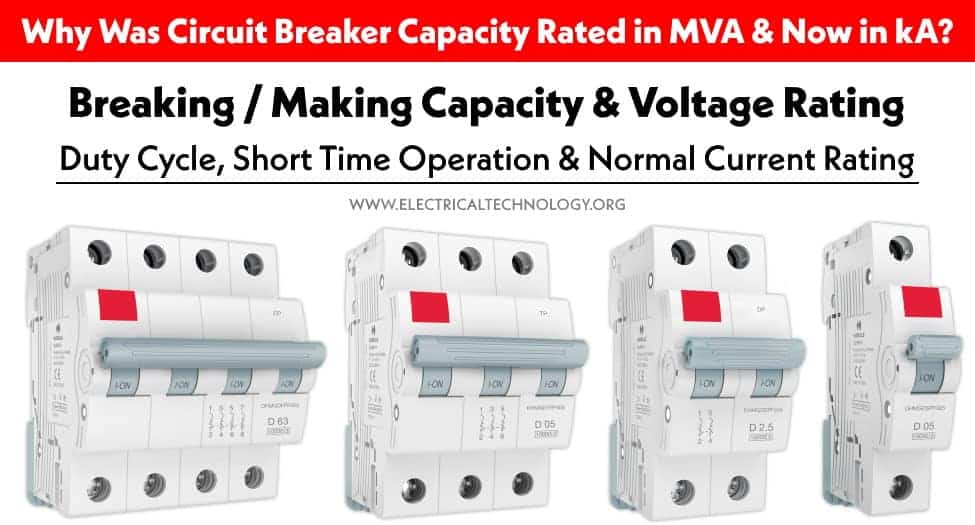 Breaking capacity is the maximum fault or short circuit current (RMS) a circuit breaker can withstand or interrupt by opening its closed contacts at rated recovery voltage without damaging the circuit breaker and connected appliances.

The breaking capacity of a circuit breaker is expressed in RMS value because of symmetrical and asymmetrical factors due to the presence of ripples and DC components during the fault for a very short time.

The breaking capacity of a circuit breaker was rated in MVA earlier considering the rated breaking current and rated operation voltage of a CB. It can be calculated as follow:

What is the Interrupting or Breaking Current of a circuit breaker having rating of 100MVA breaking capacity and 11kV rated service voltage.

Why the Breaking Capacity is Expressed in kW instead of MVA?

The making capacity of a circuit breaker is the peak value of current including the short term ripple factors and DC components during the first cycle of fault current wave after closure of circuit breaker contacts.

Keep in mind that the circuit breaker making capacity rated in kA expressed in peak value instead of RMS value (the breaking capacity is rated in RMS value). This is because the possibilities of making the breaker contacts successfully during fault currents while handling the electromagnetic forces and arc making and quenching without damaging the breaker and circuit.

These harmful forces are directly proportional to the square of max instantaneous value of current when closing. This is why the making capacity is stated in Peak value as compared to the breaking capacity which is expressed in RMS value.

The value of short circuit currents are maximum at first phase or waves in case of max asymmetry in an phase connected to the breaker. In simple words, The making current is equal to the max value of asymmetrical current i.e. Breaker Making Capacity is always greater than the Breaker Breaking Capacity.

The rated short circuit making current is taken as 2.5 x RMS value of of AC components of rated breaking current as theoretically, the fault current can rise to twice of its symmetrical fault level at the initial stage.

The breaker making capacity can be calculated as follow.

To convert the Symmetrical Breaking Current from RMS to the Peak Value:

Multiply the above expression by 1.8 to include the doubling effect of maximum asymmetry. i.e. effect of short circuit current with consideration to slight drop in current during the first quarter cycle.

It is shows the mechanical duty requirement of circuit breaker switching mechanism.

Duty cycle or rated operating sequence of a circuit breaker can be expressed as follow:

The value of safe maximum voltage limit that the breaker can be operated without any damage is known as the rated voltage of circuit breaker.

On the other side, a 400V AC rated voltage circuit breaker should not be operated at higher voltage i.e. 1000V or more whereas, a 1000V AC rated voltage breaker can be used on 400V of system voltages. If we use the breaker at the rated voltage level, it will capable to quench the arc produced in the breaker contacts. If we use the the breaker on higher voltage levels instead of rated voltage, the transient recovery voltage (TVR) as compared to the dielectric strength of the arc quenching medium. In that case, the arc may still exist as the arc quenching medium is unable to distinguish it successfully which leads to the damage to the circuit breaker or insulation of breaker.

Expect of the above voltage rating, two additional voltage rating may be taken in the account while considering the level of voltage for circuit breakers for different operation.

Power frequency withstand voltage Rating of a circuit breaker shows the ability to manage the sudden increase in the voltage which is very high than the higher system voltage. It is due to sudden changes in the load or disconnecting a large portion of load at once.

To reduce the unwanted operation of a circuit breaker like the fault current for a very short time or sudden change or reduce in loads, the circuit breaker should not trip and disconnect the circuit if the fault disappear automatically and handle the electromagnetic force and temperature rise. If it exceeds the specified time in seconds or milliseconds, the breaker then will open the contacts to make sure the max possible protection to the connected portion of loads and equipment.

There are different classes like B, C, D and Class 1, Class 2 and Class 3 with associated curves are used. Class 3 is best which allows maximum 1.5L joule/second tested as per IS 60898. For example, oil circuit breaker has the time capacity of 3 seconds and it should not exceed the exact 3s while carrying the short current. The rated short time current capacity should equal to the rated breaking capacity of circuit breaker. Therefore, care must be taken for sensitive device while considering the time capacity rating of breakers.

The normal current rating of a circuit breaker is the RMS value of current it is capable to carry continuously at its rated voltage and frequency without changes in operation due to the rise in temperature during the normal operation.

The normal current should be 125% of the rated current of the circuit. For example, if the load current is 24A, the circuit breaker rating should be as follow.

Another way, the breaker current size can be device by 0.8 to find the load current. i.e a 25A breaker can be used for 20A lighting load etc.

Difference Between Current and Voltage

Which One Kills - Current or Voltage and Why? Amps vs Volts