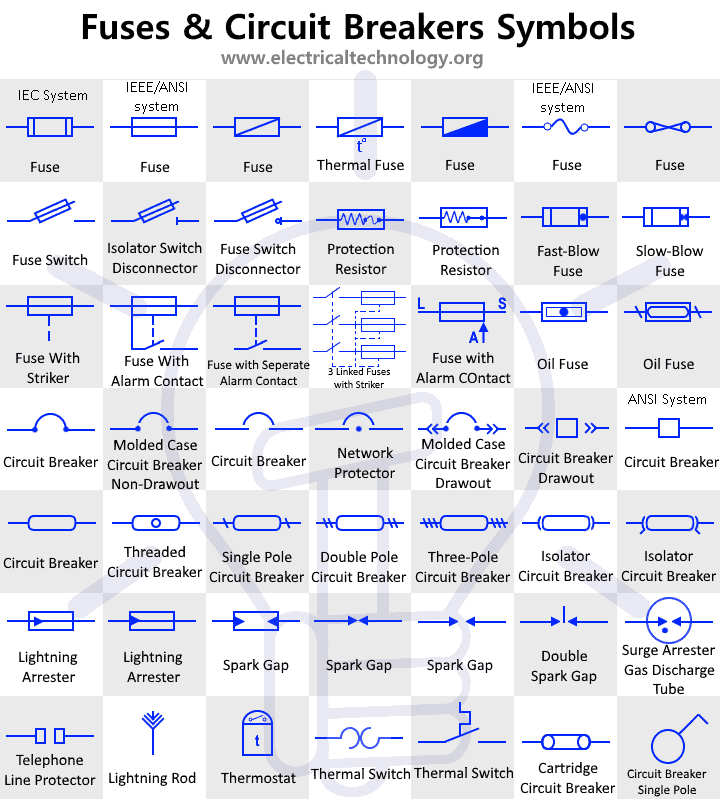 These are some of the symbolic representation of a generic fuse in any electrical circuit. A fuse is used for protection of any electrical device from overcurrent. It has a small wire or metal which melts due to large current & Opens the circuit blocking the flow of faulty currents. The IEC, IEEE & ANSI provide different representation systems.

This symbol represents a fused switch.  A fuse switch performs the action of switching by physically removing the fuse because the fuse is the part of the switch.

It is a also known as disconnector switch or isolator switch is used for isolating and completely de-energizing the circuit. It is an off-load device. The symbol above represent an isolator switch.

It is the symbol for fuse switch disconnector. It is a fuse in series with a switch. It can switch the device manually and also provide the protection against overcurrent by breaking the circuit.

These both symbols represent a protection resistor. It operates like a resistor that limits the current flow & if exceeds its certain limit then it blow out opening the circuit.

The symbolic representation of a fast blow fuses in any electrical circuit. Fast blow fuse instantly blow when the current exceeds beyond its maximum limit. It is the most common type of fuse used in electrical equipment which are sensitive to high current.

Such type of fuse is also known as striker fuse. It has a striker pin that works as an indicator for showing the fuse condition. The pin pulls out when the fuse blow.

The symbolic representation fo fuse with alarm contact. Such fuses have a builtin alarm circuit for displaying the status of the fuse. When the fuse blow, the circuit activates and shows a light or any other indication.

This symbol represents a fuse with separate alarm contact.

3 linked Fuses with release of any Striker

This is the symbolic representation of the 3 linked fuses which releases with the release of any of the three strikers.

It is the symbol for oil Fuse. It is used in distribution switchgear that are immersed in the oil. The oil is used as coolant to increase its breaking capacity.

These are all the symbols used for generic circuit breaker. Circuit breaker is an automatically operated switch that protects the appliances from short circuit or heavy load current. It opens the circuits once the current flow crosses its maximum limit.

Fixed Mounted Breakers or Non draw out circuit breaker is represented by the symbol given above. This type of breaker is fixed & during maintenance, the power flow through the breaker needs to be stopped.

Draw out circuit breaker has two parts i.e. base which is fixed & the sliding breaker which can be removed without interrupting the power flow. Such type of circuit breakers is used where continuous power is necessary even during maintenance.

A Network protector is used between the secondary terminal of the distribution transformer & the load network. Its function is to break the connection when it detects any reverse flow of current to prevent any loss.

This symbol represents a single pole circuit breaker. It has only one Hot wire & when there is any overload or short circuit it trips.

This one represents a circuit breaker with two poles. Such type of circuit breakers has two separate hot wires going through it. When a short circuit or an overload occurs in any of the two hot lines, the circuit breaker trips both the lines.

Isolator Circuit breaker is used for isolating the load from the source completely. It is an off load manual device. It has slightly less current capacity then circuit breakers. It provides a visual confirmation of an open circuit & a necessary precaution during maintenance.

It is the symbol used for lightning arrester. It is a device used for protection against lightning or high surge currents in line. It has a two terminals i.e. high voltage terminal & ground terminal. The lightning arrestor diverts the surges from lightning to the earth.

These are some of the symbols used for spark gap. It is made of two conductors with small gap in between which is filled with gas. The gas ionizes when the voltage exceeds the gas breaking point & it creates a spark. It is used in spark plug for fuel ignition and as switching devices for pulse power application like discharging the capacitor at high voltage/current.

This type of spark gap has two small gaps between the conductors which creates double spark. Above given is the symbol for double spark gap.

Surge arrestor or Gas discharge tube is made of hermetically sealed gas chamber. Whenever the voltage exceeds certain limit, an arc is formed which short circuit the whole current flow thus protecting the equipment.

The symbol for telephone line protector which protects the telephone line from the surges or lightning to prevent any damage to the conductor or the equipment.

This is the symbolic representation of a lightning rod. It is a metal rod placed on top of any building. This rod is connected to the ground with a conductor. When a lightning strike the building, the rod catches the lightning & transmits the power to the ground bypassing the building & preventing any damage.

A thermostat controls the temperature surrounding it & maintains it by switching the cooling or heating equipment on & off. The symbol for thermostat is given above.