Why is an Alternator or Generator Rated in kVA, Not in kW?

As we already know that why is a transformer rated in kVA instead of kW, same is the case and reason as well here i.e. the power √3 VL IL Cos Φ delivered by the alternator and generator for the same value of current, depends upon P.F. (Power Factor = Cos ϕ) of the load. In other words, generators and alternators don’t deliver Watts but both of active and reactive powers which depends on the power factor of the connected load to it.

Keep in mind that the conductors of an alternators are calculated for a definite current and the insulation at the magnetic system are designed for a definite voltage independent of P.F. (Cos Φ) of the load. For this reason apparent power measured in kVA is regarded as the rated power of the alternator.

In very short, a generator generates both active and reactive power which is rated in volt-amperes (VA) instead of watts (W). 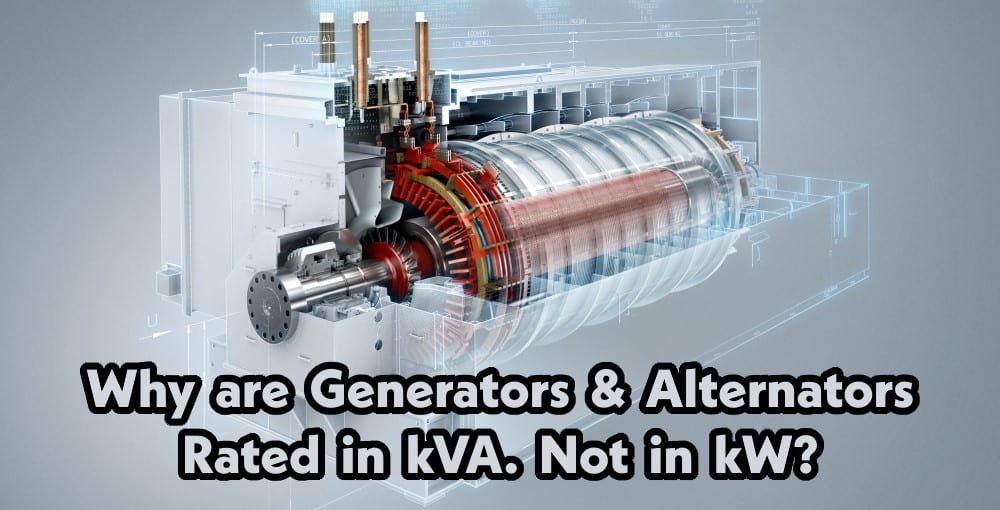 The main factors manufacturers consider while designing electrical devices and appliances which provide electric power like transformer, UPS, alternators and generators etc, are load and power factor. As they don’t know exactly what is the power factor and which kind of load (resistive, inductive, capacitive or a mixture of all of them) will be connected to the device and appliances.

So they simply design and rate the electrical device according to its maximum current output that the conductors can safely carry while they consider unity power factor (In case of pure resistive load).

If we connect inductive or capacitive load (When power factor is not at least unity), The output would differ as there are losses due to low power factor.

For this reason, KVA is an apparent power which does not take into account the PF (Power factor) instead of KW (Real Power).

In case of unity Power factor (1) i.e. pure resistive load. A 100kVA generator or alternator would provide exactly 100kW according to the following formula.

If we put the value of Cos Φ as 1, The real power (kW) would be equal to the apparent power (kVA).

In case of inductive or capacitive load, suppose the power factor is 0.80.

Now the real power would be

Now you know why alternators, generators, transformers and UPS etc are rated in kVA instead of kW.