Main Difference between a Circuit Breaker and a GFCI

The electricity just like a fire is a good servant but a bad master. You always need to keep it in control but if it ever gets out of control, it can cause serious injuries to you or damage your house. Therefore, we use multiple types of protection devices to prevent these electrical hazards. The circuit breaker & GFCI are two of the many types of electrical protection devices that we use in our household. Both of these devices offer protection against fault in electricity. Apart from that, the circuit breaker & GFCI are quite different. 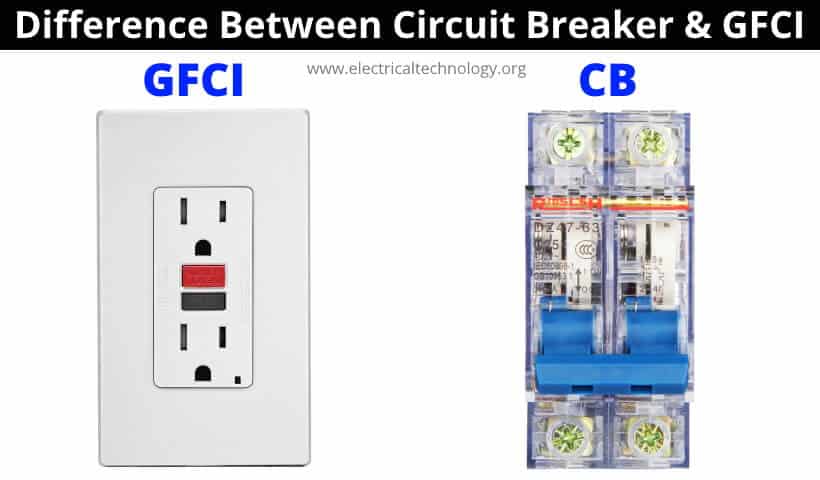 Before going into the differences between Circuit Breaker & GFCI, let’s discuss their basics first.

Circuit Breaker is an automatically operated switch that protects a circuit from overloading or short circuits. It is used for protection against abnormal currents flowing in the circuit. It detects massive current surges or any short circuits & trips the supply to protect the wiring & house from further damage.

The current rating written on the circuit breaker plays an important role in its operation. It breaks the circuit or interrupts the current supply when the current exceeds this limit. The current may exceed due to numerous reasons such as; overloading, short circuit, huge spikes in the main lines. The overloading may occur due to several heavy loads connected with multiple outlets from a single circuit breaker or a faulty load connected in that outlet. The short circuit may occur due to exposed wires come into contact with each other because of deteriorated or damaged insulation.

For example, a circuit breaker rated 15 amps will automatically switch off & breaks the circuit when the current flowing in the circuit exceeds 15 amps.

GFCI or Ground Fault Circuit Interrupter is also a protective device that breaks the circuit when there is a current leak. It is used in wet locations or where electricity is used near water such as kitchen, bathroom, outdoor, garden & pools, etc. Using such outlets helps in prevention from getting electrical shocks that could end up fatal. You may also refer to the earthing and grounding tutorials. 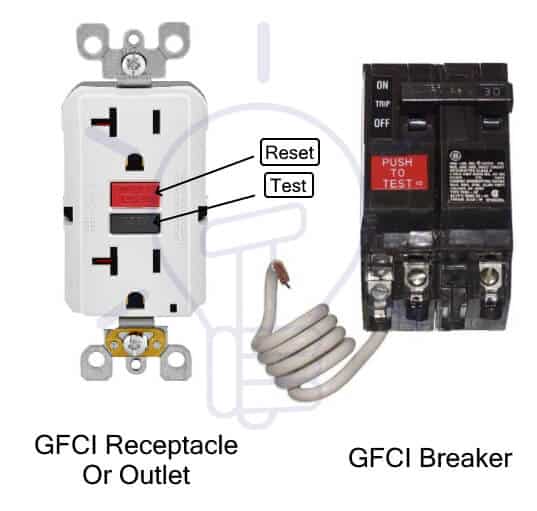 It is an outlet with a built-in breaker that constantly compares the current flowing into the load “through Hot wire” & flowing out from the load “through neutral wire”. When there is a difference between the two, it pops off the breaker & breaks the power supply to the outlet. The difference occurs due to the leakage current flowing through the grounded body of a person when the appliance comes into contact with water.

The GFCI is a very sensitive device. It breaks the circuit when the leakage current exceeds around 5 milliamps which is very small current. It is relatively faster than a circuit breaker when it comes to breaking the circuit. It pops off the breaker in almost 1/40th of a second.

It has “Test Button” & “Reset Button” usually in black & red colors respectively. It is the main indication of any outlet that has GFCI protection. The “test button” is used for verification of its operation. It momentarily connects the live wire with the ground wire with in the outlet. The “Reset button” is used for resetting the power supply after it breaks. But you should not press it before disconnecting the appliances connected with it.

The GFCI will never trip due to overloading or any short circuit in the appliance connected. But it will trip the circuit breaker connected with the said GFCI outlet.

Difference Between GFCI and AFCI

Difference Between AC and DC Motors