What is Ground Fault Circuit Interrupter (GFCI) and How it Works?

At home or outside, there is no way can we do without electricity and electrical devices. These are the indispensable necessities of our modern day lives. But sometimes their accidental “touch” can give a painful shock resulting in serious injuries which at times, sadly enough can have fatal consequences.

Incidents of electrical shock are avoidable for sure. For making electrical devices “shock free” and eliminating chances of fires, electrocutions and injuries to users, all one needs to do is eliminate electrical hazards with affordable devices.

Related Post: Wiring of the Distribution Board with RCD (Residual Current Devices)

Three types of GFCIs are commonly used in homes – the GFCI outlet, the GFI circuit breaker and the portable GFCI. All of these GFCIs perform the same function but each has different applications and limitations. 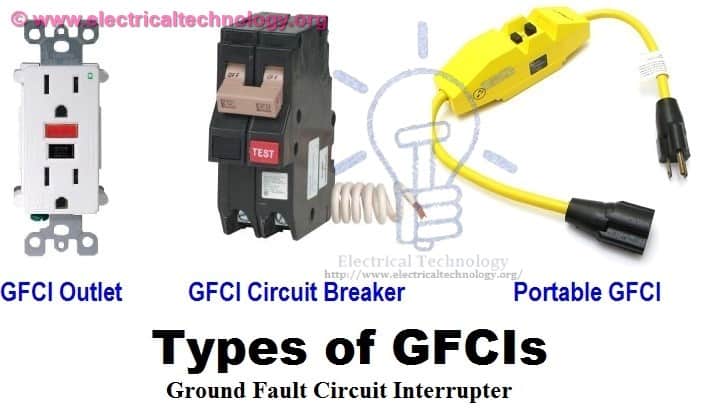 It is like a standard electrical outlet and protects any appliance plugged into it. The GFCI outlet can also be wired to protect other outlets that are connected to it.

It is used for mobile applications and can work as well as the ones installed in a house. Portable GFCIs are frequently used by contractors on worksites. But Portable GFCI protection could also be put to use whenever electrically-powered equipment is used in garden related works and when using electric tools in and around the house.

Precaution to take: Portable GFCIs should not be used in place of permanent ones in home. They are intended to be used only in situations where you must bring power from an unprotected outlet into a hazardous situation.

The National Electrical Code (NEC) requires GFCIs to be installed at following spots at home and outside:

The NEC Code Requirements for GFCIs are aimed at providing protection to anyone who plugs into an electrical system. As per the NEC Code, the installation of GFCIs is a must in following areas:• 210.8(A) Dwelling Units

Jeson Pitt is a professional electrician with a keen interest in electrical products and how they work. He spends much of his time delving into the world of new electrical technologies and innovations in the industry, polishing his skills and expertise, as well as sharing his thoughts and learnings with other enthusiasts. Jeson works as an online marketing manager for D&F Liquidators, a leading electrical products supplier in CA.