Motor is an electrical machine that converts electrical energy into mechanical energy. It takes electrical current as its input and it starts rotating to drive some mechanical load. The advancement in motor technologies allows the use of DC motors in various applications from small toys to cordless power tools and conveyor belts in industries. There are two major types of DC motors i.e. brushed and brushless motor and choosing the best one for a specific application is very necessary. Visually these both may look the same and are operated from the same source but their operation and performance is quite different.

In this article, we are going to enlist the differences between brushed and brushless motor. But first, let’s discuss their basics and how they work. 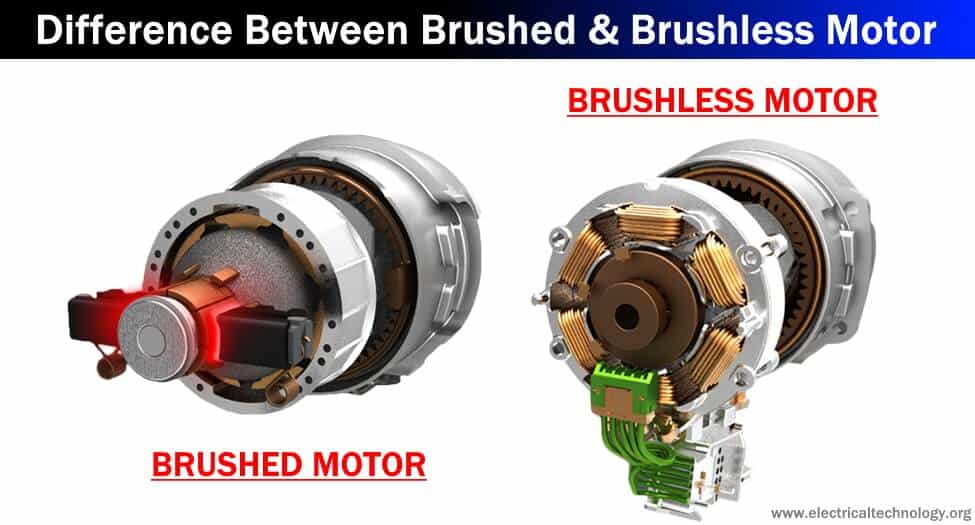 The brushed motors are the earliest motor in the history. It uses carbon brushes mechanism to supply power to the rotating part of the machine called rotor. While the stator which is made of permanent magnet surrounds the rotor. 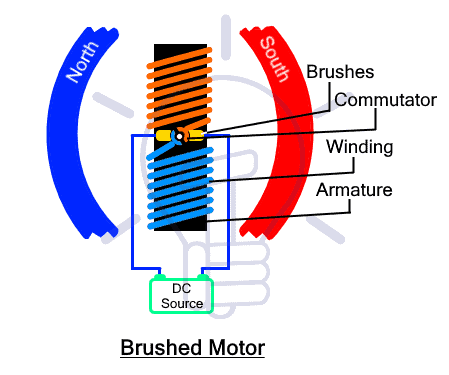 The rotor has armature windings and slip rings as well as an external shaft to drive load. The windings carry the input current which is supplied through the slip ring commutator that connects the stationary circuit and rotating armature windings while also changes the supplied DC current after each half cycle to allows continuous spinning of rotor.

Since the current carrying windings are placed inside a magnetic field generated by the permanent magnet of the stator, the rotor experiences a rotational force. When the rotor rotates, the brushes slide across the slip ring which decreases its life-span due to the friction.

The comutators are rings with breaks between them in shapes of half rings that allow switching between input DC polarities. When the carbon brush slide across the comutator, it can electrically short the comutator and create sparks that will damage the brushes. Thus it requires frequency maintenance and need replacing of brushes.

The carbon brushes when slides across the commutator, it breaks and makes the contact with the armature windings (inductive load) that results in generating electromagnetic noise in the system.

The brushed motors are very noisy. That is why the industries having very extreme environment where noise is not an issue often uses brushed motors due to its cheaper cost. It saves a great deal of equipment cost.

The brushless motor (also known as BLDC Motor) as its name suggests, does not have brushes and it does not require it to operate. It is designed for the sole purpose of the removing the brushes from the previous design. 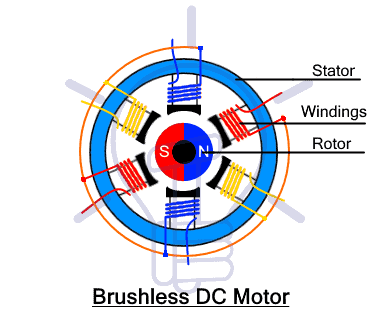 Since there are no brushes, the input power is supplied to the stator of the motor which in this case is made of multiple windings that surrounds the rotor. While the rotor is made of permanent magnet.

Since the DC input to the stator needs to be switched, such motors used electronic commutations instead of mechanical commutation using switching devices such as thyristors. These switches are controlled using microcontroller to precisely switch the input between the stators windings. It essentially switches the DC input into a 3-phase supply which generates a smooth rotating magnetic field.

The controller used for brushless motor is more sophisticated and very expensive. It does no operate without its controller which also offers the precise speed control and positioning of the rotor. But the cost of the controller is far more greater then the motor itself. 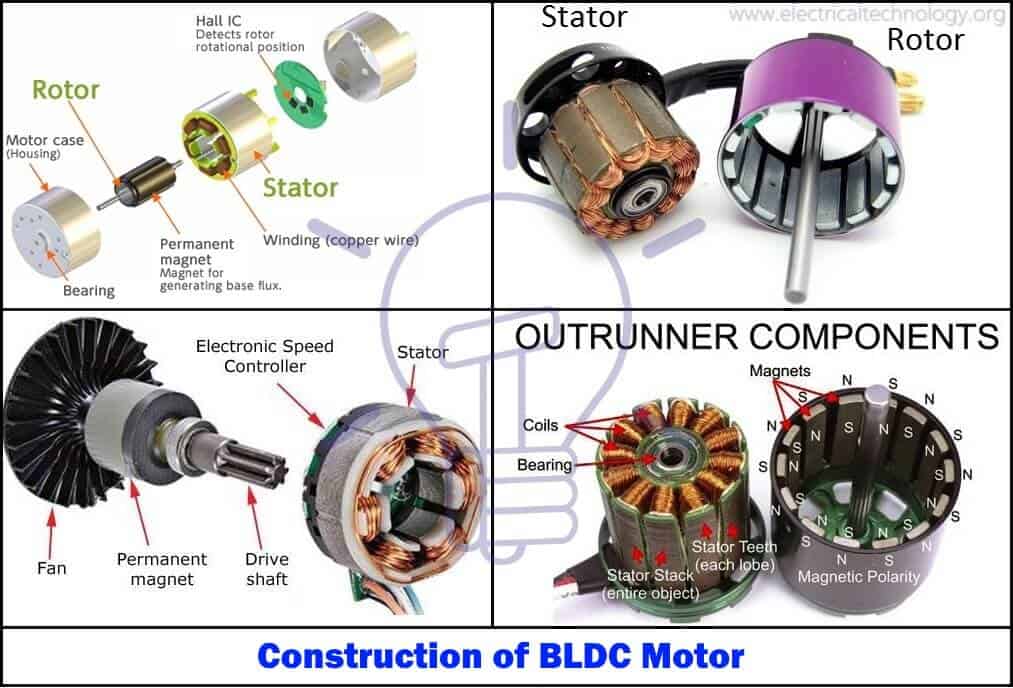 Since there are no brushes, there are no electrical or electromagnetic noises and the sparks generated in mechanical commutation. It helps in increasing the life span of the motor as well as the efficiency of the motor. The energy dissipated in brushes is converted into mechanical output.

The brushless motor speed depends on the frequency of the AC power supplied by the controller. Which is why it is also called synchronous motor. To know more about the different types of motors, refer to the previous posts about BLDC (Brushless DC) motor, stepper motors and servo motors.

Following are the key differences between brushless motor and brushed motors.

Difference between Synchronous and Asynchronous Motor