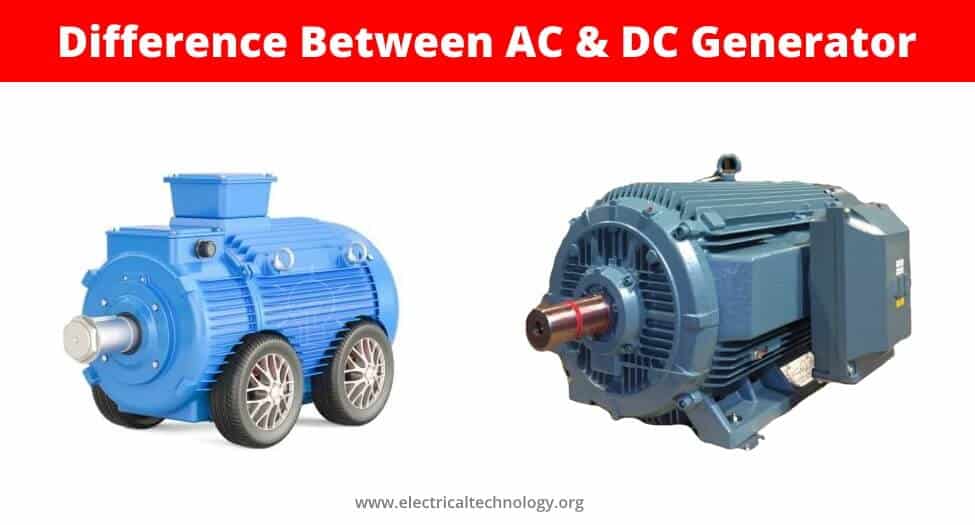 Before going into the list of differences between them, we are going to discuss how the generator generates electricity & how AC & DC is generated.

The electricity is generated using Faraday’s law of electromagnetic induction. It states that a current or EMF (Electromotive Force) will be induced in a conductor if it is placed in a changing magnetic field.

The generator uses the later, where the conductor spins inside a stationary magnetic field. The conductor is wounded around an armature in rectangular shape & because it rotates inside a generator, it is known as the Rotor of the generator. The magnetic field surrounding the armature is either a permanent magnet or electromagnetic energized by a separate DC supply which remains stationary. Thus it is known as the Stator of the generator.

Generally, the rotor is the moving or rotating part of an electrical machine & the stator is the stationary part.

In order to supply the current from the rotating armature to a stationary circuit, we use a special type of device called slip ring & split ring commutator. It helps in providing AC & DC supply to the circuit. You may refer to the generated electric power transmission and distribution in the previous post.

AC generator is a generator that converts mechanical energy into AC electrical energy. It is a type of generator designed to generate alternating current with a frequency of 50 or 60 Hz.

The current induced in the armature is supplied to the circuit using slip rings. The slip rings are two separate conducting rings connected with each terminal of the armature. These rings supply current the circuit through a sliding contact called brushes. The rings always rotate with the armature while the brushes remain stationary. 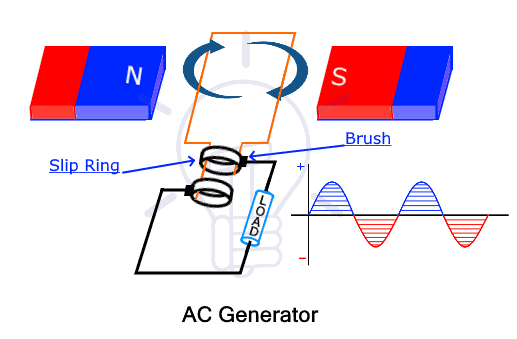 Since the slip rings are continuous rings it provides the alternating current generated inside the armature. And because the brushes continuously slide across it, there is no issue of short circuit or sparks between them. Therefore, the life expectancy of the brushes in the AC generator is more than the DC generator.

The alternator is another type of generator that only generates AC electrical energy. It has a fixed armature & rotating magnetic field. Since the current is generated in a stationary part, it is more simple & easier to supply it to the stationary circuit. The brushes do not wear out in such cases.

It is also a type of generator that converts mechanical energy into DC electrical energy. It is also called a dynamo. It generates pulsating Direct current that does not change its direction. 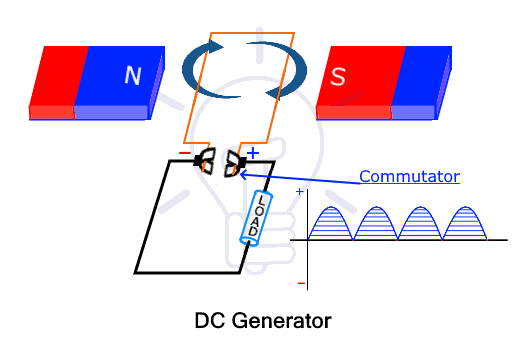 The split ring is a ring-shaped conductor split in half so that there are two gaps between the rings. Each half side of the same ring is connected to the separate terminal of the armature conductor & two stationary brush slides across it. The brushes supply current to the circuit.

Since the current induced in the armature is AC, each half rotation changes the current direction in each half of the ring.  Therefore, the output current supplied through the stationary brushes remains in one direction.

The Split-ring commutator has a gap between its rings that causes the brushes to touch both halves at the same time & cause short circuits & sparks between them. This wears out the brushes quickly & reduces the performance of the generator.

The conclusion of this comparison between AC and DC generators is that AC generators are more durable,  reliable & have a simple design as compared to a DC generator. However, DC has no frequency thus the prime mover’s speed does not affect it but it does require frequent maintenance which increases its overall cost.

Difference Between AC and DC Motors

Types of Inverters and their Applications