Key Differences between an Alternator and a Generator

Alternator and generator are both mechanical devices that convert mechanical energy into electrical energy. Apart from that, they are different from each other in every other aspect. The major point that differentiates between an alternator and generator is that in an alternator, the magnetic field rotates around a stationary armature and in generator; the armature rotates inside a stationary magnetic field. 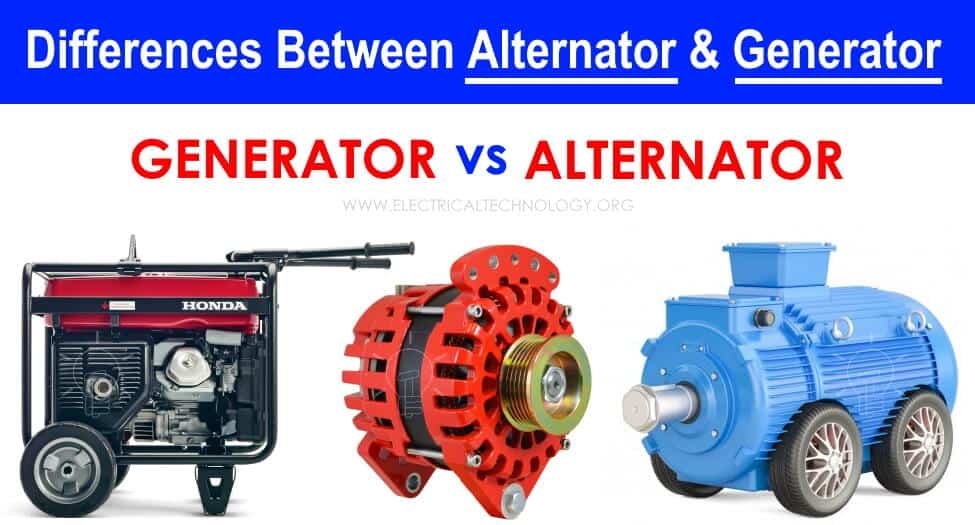 The electricity is generated using Faraday’s law of electromagnetic induction. It states that a current (EMF) will be induced in a conductor if it is placed in a continuously changing magnetic field.

What is an Alternator?

It is a type of generator where the magnetic field (rotor) rotates around the armature (stator). 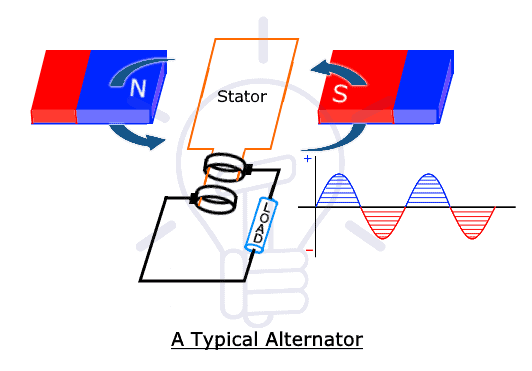 The armature supplies the electric current to the output load through brushes. Since the armature is stationary, the brushes do not wear out. Thus increasing its mechanical life and reducing the maintenance requirement.

The revolving magnetic field continuously reverses its polarity (north and south) acting on the stationary armature, causing a continuous change in the direction of the induced current. This is the reason the output of the alternator is always Alternating Current.

The alternator conserves energy. They are the enhanced and efficient version of a generator that generates energy when it is needed (depends on the load). Therefore, the batteries in the vehicle do not die due to overcharging (because the alternator stops supplying power). Hence an alternator does not waste energy.

The alternator cannot be used for charging a completely drained battery.

What is a Generator?

In the generator, the outer housing that surrounds the armature is made of either permanent magnet or an electromagnet that is stationary known as the stator. The armature is made up of coils of conductors that rotate around its axis inside this stationary magnetic field. Because of the rotating armature, the magnetic field line intersecting the conductors varies. Hence a current is induced in the rotating armature.

The armature is connected with either a slip ring or a commutator. They both transfer the electric current (which is continuously changing direction) from the rotating armature to the static output circuit. But the slip ring has a full circular connection that allows the continuous transfer of the electric current from the rotating shaft which results in an Alternating Current AC. On the other hand, the commutator has at least 2 breaks between them, which reverses the direction of current after each half rotation thus, the output current stays in one direction also known as the Direct Current DC.

It provides energy constantly even without the need for it. This is the reason it has less efficiency than the Alternator. But it can generate AC as well as DC and the output voltage remains constant throughout its operation. Therefore the generator is perfect for being used as a backup power supply in homes, offices and construction sites, etc.

It can be used for charging a completely drained battery.

Main Differences between Alternator and Generator

Difference Between Online UPS and Offline UPS - Which One is Better?