What is the Difference between Synchronous and Asynchronous Motor (Induction Motor)

The electrical motors are machines that convert electrical energy into mechanical energy for performing mechanical operations. These motors can be designed to operate on alternating current (AC) or direct current (DC). The AC motors are classified into two types; Synchronous Motors and Asynchronous Motors. Both of them share some similarities such as in their construction but they are quite different in operation and  their performance.

Before going into the list of differences between Synchronous motor and Asynchronous motor, we are going to discuss their basics and how they operate. For clear explanation, you may know the Difference Between Single Phase and Three Phase Power Supply related to the operations of single phase and three phase AC motors. 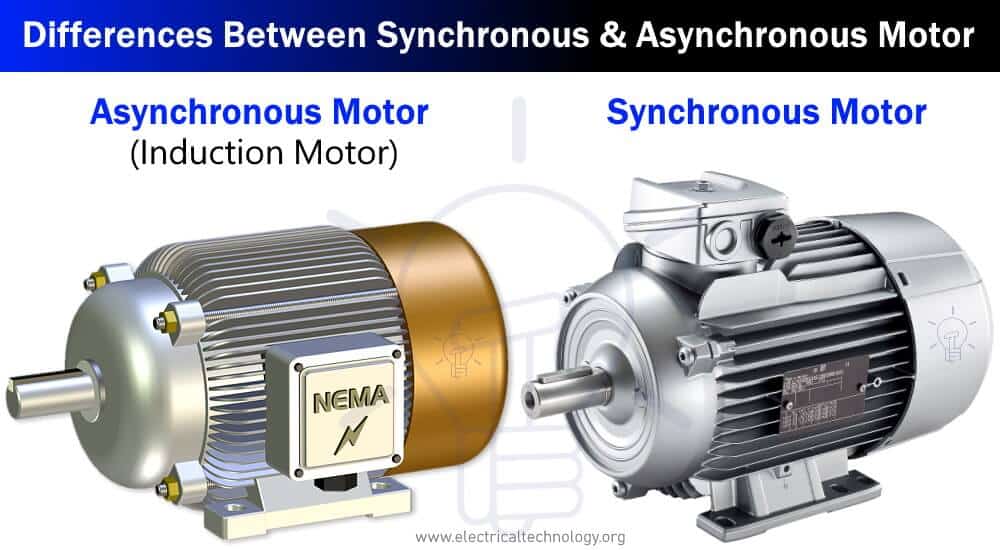 How do AC Motor Works?

As we know from our previous article ”differences between AC and DC motor”, the DC motors operates on the principle of magnetic field acting on a current carrying conductor that experiences a mechanical force. Where the stator generates a static magnetic field, and the rotor consisting of multiple winding carries the input DC current.

In AC motors, the idea of rotational magnetic field RMF is utilized. The stator is made of multiple windings that generate a varying magnetic field upon supplying the input alternating current. This magnetic field rotates around the rotor.

The rotor made from windings or closed loop conductors carry current either through induction or external current supply generates its own magnetic field. The magnetic field generated by the rotor interacts with the spinning magnetic field and starts rotating in its direction.

As the name suggest, the synchronous motor has a rotor that is designed to rotate at the same speed as its stator rotating magnetic field called synchronous speed.

The stator generates a rotational magnetic field upon supply alternating current. The rotor can be designed to generate its own magnetic field using an external DC supply through slip rings or using a permanent magnet.

The rotor is designed to generate magnetic poles that are equal or integral multiple of the stator poles. When the stator and rotor is energized, the rotor magnetic field gets locked with the stator rotational magnetic field, and it rotates at the exact speed of stator field.

It can be either separately excited or non-excited motor i.e. the former requires a separate DC source energizes the rotor windings and generates a magnetic field while the latter describes a synchronous motor whose rotor is designed to be magnetized by the rotational stator magnetic field and rotates with it.

The stator rotational magnetic field causes an induced current in the rotor. This induced current flows inside the rotor generating its own magnetic field. According to lenz’s law, this rotor field opposes the cause that’s generating it and tries to eliminate it by catching up to the speed of the stator RMF (the synchronous speed). In doing so, the rotor rotates in the direction of the stator RMF. Since it operates on the principle induction,  therefore, asynchronous motor is also known as Induction motor.

The squirrel cage rotor has a simpler design and allows induced current to flow through the copper bars. While the wound rotor allows the user to vary the rotor current during it startup as used in “Motor starter”. The point is to safely start the motor by reduce the huge starting current drawn by an induction motor. It is generally done by connecting a variable resistor in series with the rotor windings through the means of slip rings.

How to Wire Batteries in Series-Parallel to a Solar Panel?