Charles-Augustin de Coulomb discovered the Laws of Electrostatics in 1785 known as Coulomb’s Law. Until 1784, no one knew about the unit of the electric charge, then the Coulomb introduced these laws after multiple experiments on force between two masses based on the Inverse Square Law. Coulomb’s laws of electrostatic can be stated as follow: 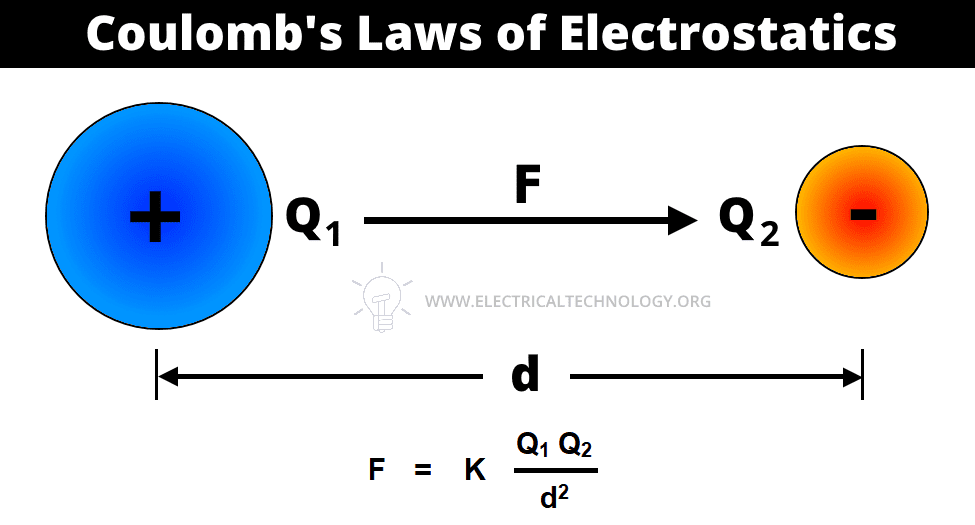 In other words, the electric force of attraction or repulsion between two charged points varies directly as the product of the charged points and inversely as the square of the distance between those charge points.

Coulomb’s Laws of electrostatic can be mathematically represented as follows.

If the medium between two charged points is vacuum or free space and the units of measurements are in MKS system (Force (F) in Newtons, Distance (d) in meters and charged body (Q) in Coulombs), then the Coulomb’s force in free space due to absolute permittivity (εo) of space would be as follows:

Coulomb’s Laws of Electrostatics in a Medium

In short, we have added the value of K which is 1 / 4πεoεrin the first and second laws.

In case of air:

Hence, Coulomb’s laws of electrostatic can be written for air, vacuum and medium as follows.

Coulomb’s Law in a medium

According to the above explanation, One coulomb charge can be defined as follow:

When a charge (amount of electricity) is placed in air to the another uniform or non-uniform charge separated by the distance of one meter, then the force of repulsion or attraction is 9 x 109 Newton between them.

Example on Coulomb’s Laws of Electrostatic

The force of gravitational attraction between two particles is given by

As seen, this force is negligible as compared to the electrostatic force between these two bodies.

What is Faraday's Law? Laws of Electromagnetic Induction