“The lines linking the north and south pole of a magnet which represents force field which links coils in a transformer is termed as magnetic flux”.

After Andre Marie Ampere (A French mathematician and physicist known as the father of electromagnetism) and others investigated the magnetic effect of current, Michael Faraday tried the opposite. In the course of his work he discovered the principle of electromagnetic induction in 1831 that when there was change in a magnetic field in which a coil or an inductor was placed, EMF was induced in the coil.

This happened only whenever he moved either the coil or the magnet he used in the experiment. EMF was induced in the coil only when there was change in the field flux (if the coil is fixed, moving the magnet towards or away from the coil causes EMF to be induced). Thus Faraday’s laws of electromagnetic induction states as follows; 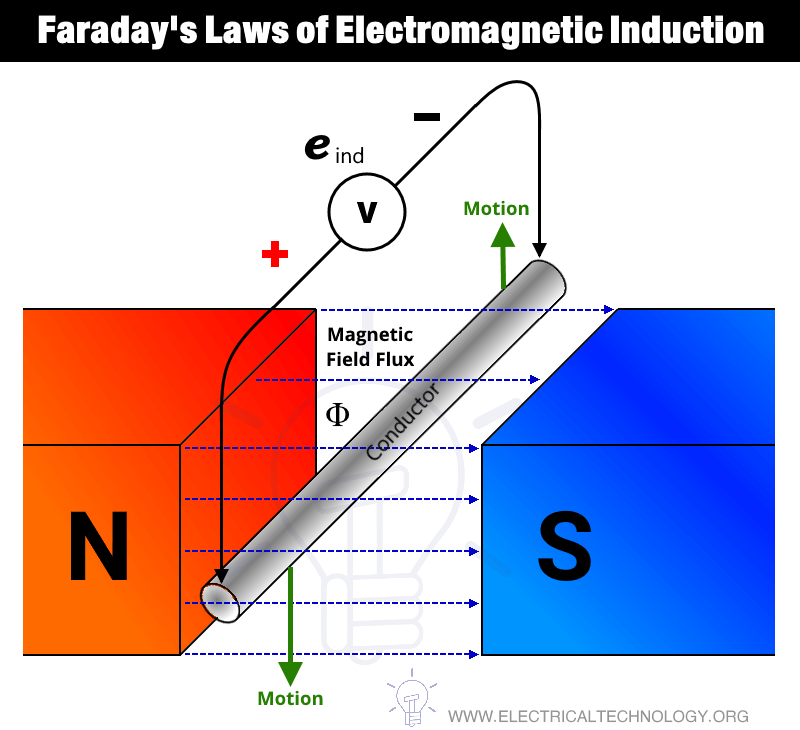 Faraday’s first law of electromagnetic induction states that “EMF is induced in a coil when there is a change in the flux linking to the coil”.

In other words, whenever the flux associated or linked with a circuits is changed. an E.M.F is induced in the circuit. This EMF lasting only so long as the change is taking place. The induced E.M.F varies as the rate if change of flux.

Faraday’s second law of electromagnetic induction states that “the magnitude of induced EMF in a coil is directly proportional to the rate of change of flux linking to the coil”.

Faraday’s laws of electromagnetic induction can be written mathematically in the form of equation as follows.

Suppose a coil contains on “N” numbers of turns and the flux changes from initial value “Φ1” to the final value “Φ2” in time “t” seconds. Keep in mind that the flux linkage is the multiplication of linked flux to the number of turns in the coil. i.e.

Here, the rate of change in flux (dΦ) occurs in less possible time (dΦ). The minus symbol “-” at the right side of the equation shows that the induced EMF drive the current in such a direction where it opposes its magnetic effect which produced itself the EMF. In simple words, The induced EMF oppose the cause (change in current or motion) which produce it (EMF). This phenomena is also known as Lenz’s Law.

Finally, this formula shows that the EMF induced in a coil is equal to the rate of change in flux (dΦ/dt) times number of turns (N) in that coil. i.e.

Explanation and Working of Faraday’s Law

Fig 1.A shows that as magnet moves to the right, magnetic field is changing with respect to the coil, and EMF is induced.

Fig 1.B shows that as magnet moves more rapidly to the right, magnetic field is changing more rapidly with respect to the coil and a greater EMF is induced. 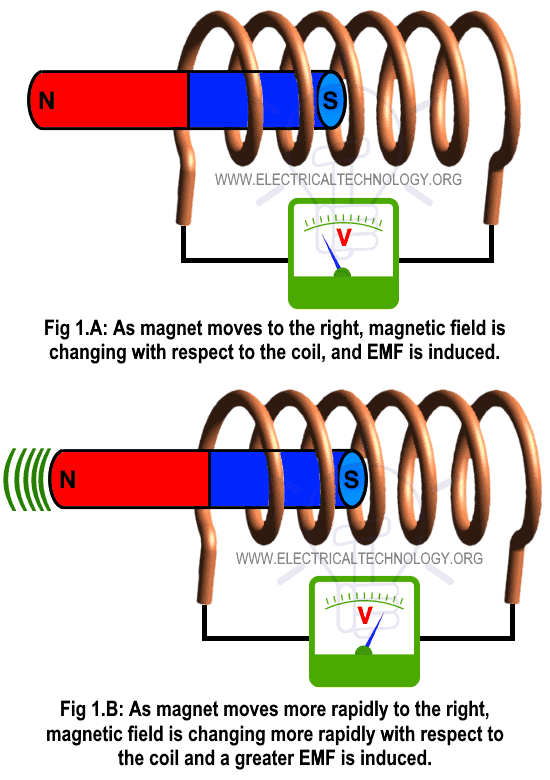 Fig 2.A shows that magnet moves through coil and induces an EMF.

Fig 2.B shows that magnet moves at the same rate through a coil with more turns (loops) and induces a greater EMF. 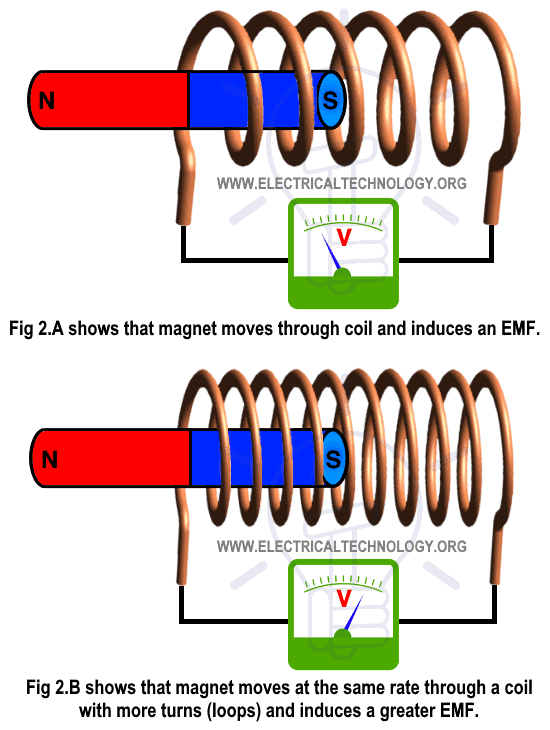 The fig 2 shows the basic demonstration of the second law of faraday i.e. the amount of induced EMF is directly proportional to the number of tunes in the coil.

The most powerful law of electromagnetic induction by Michael Faraday is used different applications such as electric machines, medical fields, industries etc. Some of them are as follows.

Apply faraday’s law to find the induced voltage or EMF across a coil with 100 turns that is located in a magnetic field and that is changing at a rate of 5 wb/s.

What is Coulomb's Law? Laws of Electrostatics With Example