Keep in mind that it is not possible to practically get an isolated pole because even a tiny piece of magnet has two poles namely S (south) and N (north) poles. The concept of isolated poles is just a theoretical approach which does not relate to any experience or practice. In practical applications, the poles of long and tiny magnets are supposed to be point poles. 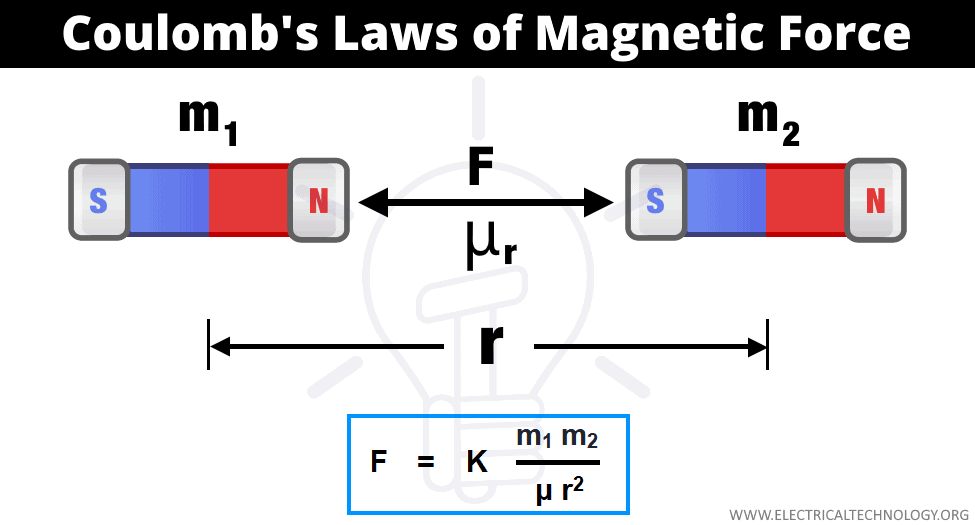 Coulomb’s Laws of magnetic force  stats that  the force of attraction or repulsion between two magnetic poles placed in medium is:

Then, the force “F” of attraction or repulsion between two magnetic poles would be:

Here, the r̂ is a unit vector which shows the direction of “r”. So,

Hence, a unit of magnetic pole may be defined as that pole which when placed in vacuum at a distance of one meter from a similar and equal pole repels it with a force of 1/4 πμo newtons.

Therefore, a unit magnetic pole may be defined as:

A pole placed in a vacuum repels the equal and similar pole with a force of 1/4 πμo Newtons if the distance between them are 1 meter is known as a unit magnetic pole.

A unit magnetic pole is defined as the magnetic pole which when placed at a distance of one meter from a very long straight conductor carrying a current of one ampere experiences a force of 1/2π newtons.

The ferromagnetic materials (e.g. Iron, Steel, Nickle, Cobalt and their alloys) have high permeability as compared to vacuum.

The reference value of absolute permeability in a vacuum is μo = 4π x 10-7.

Alternatively, the relative permeability of a material is the ratio between the produced flux density “B” in that material and the flux density produced by same magnetizing force “H” in the vacuum.