In a power system network, power is supplied by many generators that are connected in an interconnected network. Instead of using a single large generator, many small DC or AC generators are operated in parallel.

Sometimes, the DC generators are used as the backup plant. In some conditions, it is not always possible to have a generator that fulfills load requirements. Hence, to meet the load demand, more than one unit of DC generators are connected in parallel.

Nowadays, the parallel operation of DC generators is used widely in the network to achieve the below advantages. 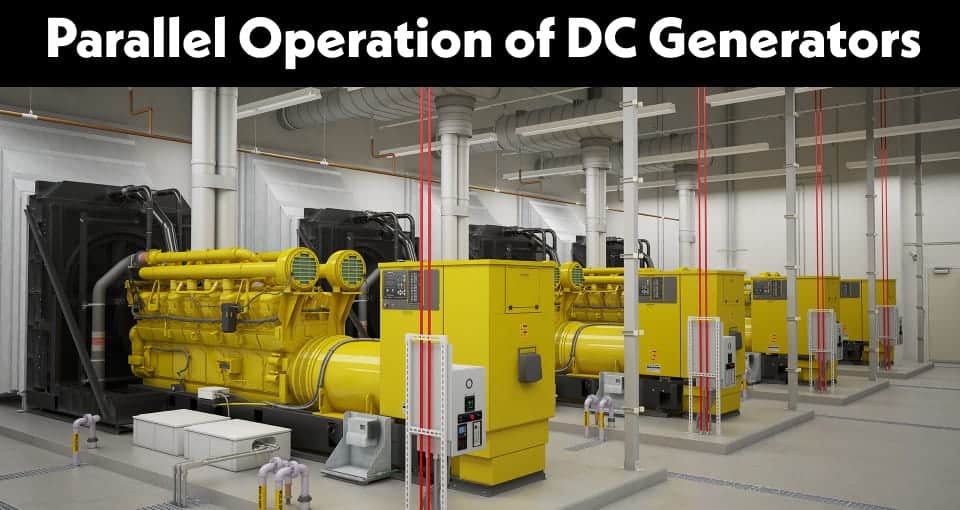 The advantages of parallel operation are listed below.

Easy to Maintain and Repair

The electricity demand increases day by day. Hence, while constructing a power plant, always keep places for future expansion. Instead of building an entire power plant, it is easy to add more generators and connect them in a parallel manner to achieve more power demand.

Due to these advantages, parallel operation of the generator is widely used. As we know, the DC generators are classified into three types;

The connection diagram of the parallel operation of the DC shunt generator is shown in the figure below. 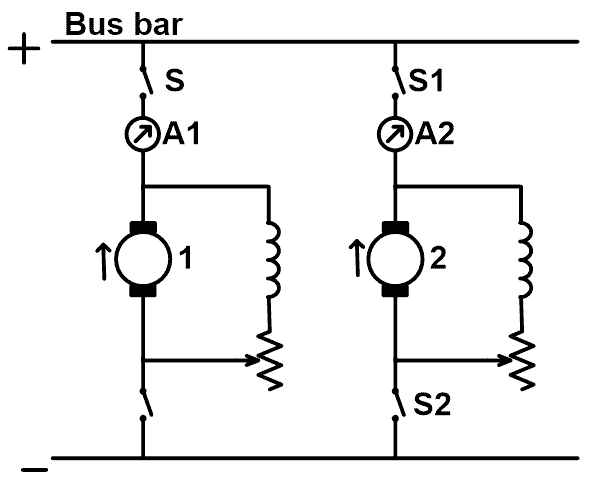 The induced EMF of generator 2 must be higher than the bus bar voltage. In this condition, generator 2 delivers the load. The current supplied by generator 2 is;

The connection diagram of two compound generators are connected in parallel is shown in the figure below. 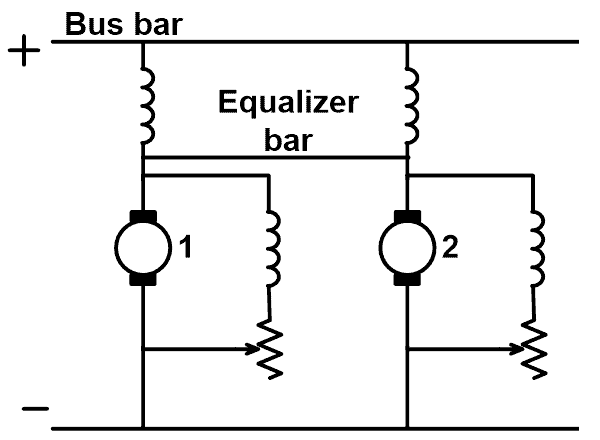 The compound generator has rising characteristics. Hence, with the absence of any corrective devices, the parallel operation of DC compound generators is unstable. At the time of starting, each generator takes the same share of the load. Due to some reason, if the current passes through the series field winding of generator-1 increases, which further strengthens its field. This results in raises its generated EMF and it takes more load.

In this operation, we assumed that the load is constant. Hence, the share of the load of generator-2 is reduced and weakening its series field. This results in dropping off its load. This effect is cumulative After some time, the generator-1 takes the entire load. And generator-2 operates as a motor. In this condition, the circuit breaker of anyone generator will trip and stop this operation.

To make this operation stable, we need to use any corrective device with this system. In this parallel operation, the equalizer bar is connected to the armature end of the series windings. The equalizer bar is a conductor of low resistance. It is used to make the operation of over-compound and level-compound generators stable.

To maintain proper parallel operation and equal share of the load, the regulation of both generators must be the same and the series field resistance must be inversely proportional to the generator ratings.

The connection diagram of the parallel operation of two DC series generators is as shown in the figure below.

This is a cumulative process. So, in the end, the entire load will be taken by generator-1 and generator-2 operates as a motor. Similar to the compound motor, this problem will be solved by using an equalizer bar. And due to this, two machines pass approximately equal currents to the load.

The DC shunt generator has slightly dropping characteristics. Hence, it is the most suited generator for stable parallel operation. If one generator takes more or less load, due to its tendency to restore the original division of load, both generators immediately take proper load sharing.

In a condition of fault, one generator is out of service and its field is weakened. In this condition, the series field of another generator is increased. Thus, the breaker is open and the faulty generator removes from the system. This method of removing and connecting the generator makes the system reliable and it helps to prevent shock and sudden disturbance of prime mover as well as in the system.

The voltage characteristic of the shunt generator is as shown in the figure below. 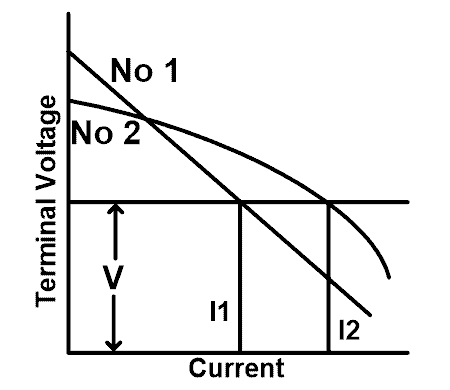 If two generators of different kVA ratings are connected in parallel, the load is shared according to their ratings. Their external characteristics plotted in terms of percentage full load current must be identical as shown in the figure below. 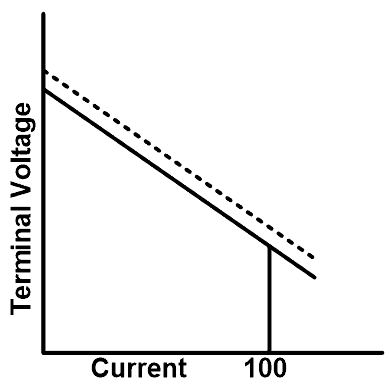 For example, one generator of 100 kVA and another generator of 200 kVA is connected in parallel with a 240 kW load. In this condition, the first generator will share 80 kW, and the second generator share 160 kW. 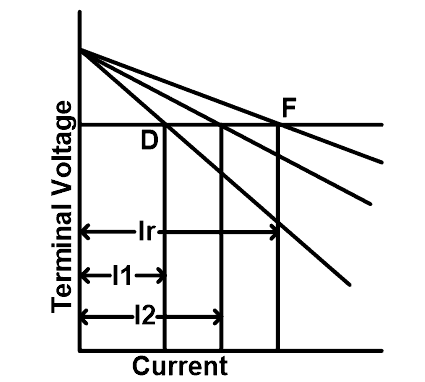 The above results can be found by simple calculation instead of graphical representation if the generator has a straight line. Now, we calculate the load sharing portion which has unequal no-load voltage. 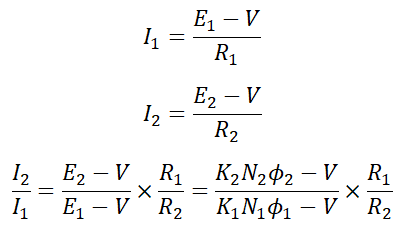 From the above equation, we can see that the bus bar voltage can be kept constant by increasing Φ2 or N2 or reducing N1 or Φ1. N2 and N1 are changed by changing the speed of driving engines and Φ1 and Φ2 can be controlled using shunt field resistances.

How to Run a Three-Phase Induction Motor on a Single-Phase Power Supply?