At the end of this post, a list is given showing all the related alternators and generator symbols in single image.

This symbol represents a simple generator. A generator converts the mechanical energy into electrical energy.

Such type of generator generates an alternating current with frequency in very low range as low as 8 Hz to 40 Hz. They are mostly used in traction power system with frequency of 16.7 Hz. Low frequency generators are beneficial for power transmission over long range.

The alternating current generated by this generator falls in the medium domestic range of 50 to 60 Hz.

These generators generate the AC with frequency ranging above 100 Hz. As the loss in power transmission increase with frequency, they are used in a confined building. They 400Hz power systems are used in military equipment, spacecraft, aircraft and server rooms.

It is a symbol used for a voltage generator.  A voltage generator generates & maintains the voltage across it terminals. Its voltage is independent of any other elements in the circuit & it does not vary with the current drawn from it.

It is a dependent voltage generator whose terminal voltage depends on other elements of the circuit or on the current drawn from its terminals.

This type of symbol is used for such machines that can be used as both motor & generator. The motor converts electrical energy into mechanical energy & the generator does the vice versa.

A photovoltaic cell or solar cell converts the light energy into electrical energy. It is the building block of solar panel where these solar cells are connected in series and parallel together to increase it total voltage & current.

Dynamo is an electrical machine that generates direct current using commutation. The Dynamo consists of rotor & stator made of coils. The rotor rotates inside the constant magnetic field generated by the stator coil & produces EMF. It has a built-in brakes system to stop its rotation when you want to shut it off.

An alternator is an electrical generator that converts mechanical energy into alternating current. In alternator, a rotating magnetic field of the rotor generates varying current in the stator (armature) winding.

This symbol represents a DC generator or also known as Dynamo. It converts mechanical energy into direct current using commutator.

A homopolar generator works by rotating a conductive disc inside a magnetic field that creates a DC current between the center and rim of the disc. It generates low voltage but high current.

It is a DC generator that converts thermal & kinetic energy into DC electrical energy. It has no moving parts. The hot ionized plasma (which is a conductor) moves inside the magnetic field that generates a DC potential difference along the opposite electrodes. Furthermore the exhaust gases can also be used for steam power plants.

A pulse generator is an electronic circuit that generates rectangular pulses. It has variable frequency, amplitude & duty cycle to meet the requirement of its applications. It is very common test equipment used for testing any digital circuit most commonly as a clock signal.

A waveform generator is also an electronic circuit that generates different shapes of wave. The most common waveforms are square wave, triangular wave, ramp, saw-tooth wave etc. it provides a variable frequency with variable duty cycle. The waveforms generated are used in triggering or stimulating any circuit or signal processing.

Magneto is an electrical generator that generates alternating current by rotating a coil inside a permanent magnet. Unlike dynamo, it does not have commentators, so its output is AC & its rotor is rotated using a hand crank.

This symbol represents a tachometer generator. It generates voltage depending on the speed of its shaft. Thus it is used for measuring the speed of motors.

This symbol represents a wye or star connected synchronous generator. Wye connected 3 phase alternators require less number of turns than delta connected. Also the neutral point is used as path for zero sequence current during fault (unbalanced conditions) if it is grounded.

Three Phase Synchronous Generator with Access to Each Winding

Following is the list of all alternator and generator symbols. 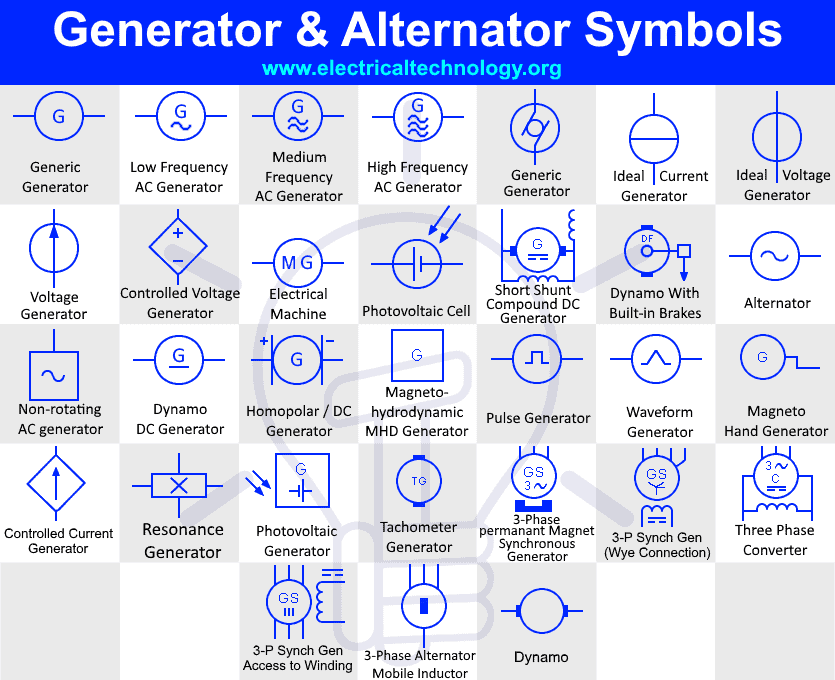