These days due to increase in demand of energy, solid development in generation and transmission is attaining importance and transforming into basic need, but in any generation system one of the main factor that is creating a lot of issues is short circuit and along with generation this issue is also increasing day by day. A few of the issues created by short/fault current are:

Due to these issues it has become a necessity to develop more accurate system to deal with short circuit. Some of the approaches will be discussed in this article.

Here are few approaches that are either in research and or in practical use depending upon their specification.

These techniques are very popular for the purpose of limiting of current. Some of the techniques like Solid State and Superconductors are in phase of their initial research and development. Two main things that must be considered while implementing a system for short circuit are:

It is one of the most economical and practical approach. Its effects on the reliability of substation are on a negligible level. Hardware in this approach is quite large in size so it occupies huge space and stability of voltage can be degraded in this system.

These are in research state of their development ,they are easy to implement in distribution system but they are quite expensive due which are not encouraged to be implement on larger level.

Fuse is a very effective ,efficient interrupting device that can be used as current limiter. It is very inexpensive and practical. The problem with it is that its area of being effective is limited because it can limit 40K volts and 200A of current. See also, HRC Fuse

Bus Coupler circuits breakers are used but they can be used for a temporary strategy or an emergency situation, so can’t be kept intact with substation all the time..

Implementation of these reactors is also a good option to deal with fault current. It works best when it has to deal with earth/ground currents.

Current Limiting Reactor and its types:

It is the most practical approach that is largely implemented. It has two types:

Dry-type CLR are air-core reactors having copper windings. Iron core cannot be used due to factor of saturation.

Oil CLR has same specification as dry type but difference is in area of application because Oil CLR is particularly developed to be used in heavily polluted environment. Di-electric constants in oil type are higher than dry-type main

specification of these fault current limiter reactors are:

Transient stability has critical role in electrical systems it is related to electric alternating current (AC.) power systems and demonstrates a situation in which a number of synchronous machines of the power system remain in synchronism after a fault occurs. Here example of synchronous motors in a power system can be coated.

Here is the process to make an efficient system to be used for current limiting reactors:

PSO (Particle Swarm Optimization) shares many similarities with evolutionary computation techniques such as Genetic Algorithms (GA). The system has started with a lot of random solutions and searches for optima by updating system. 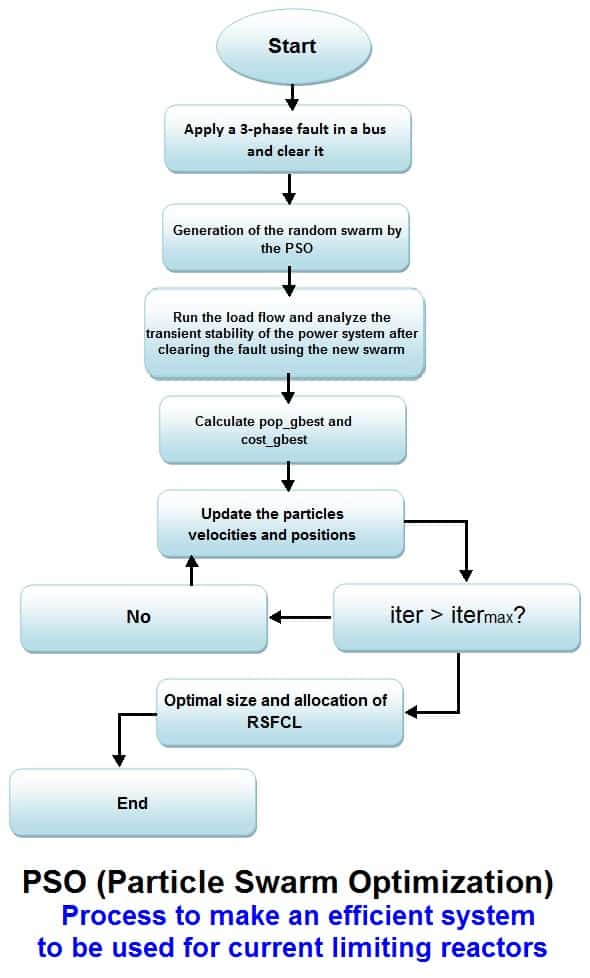