Energy is the capacity for doing work or the ability to do some work is known as energy.

Energy exists in different forms (such as electrical, mechanical, heat, light etc.) and can be converted from one to another form. For example,

Keep in mind that a change in the energy is must for work done. The unit of heat, mechanical and electrical energy in the MKS system is Joules. The unit of Work and Electric Energy in S.I system in Joule (named after English physicist James Prescott Joule). 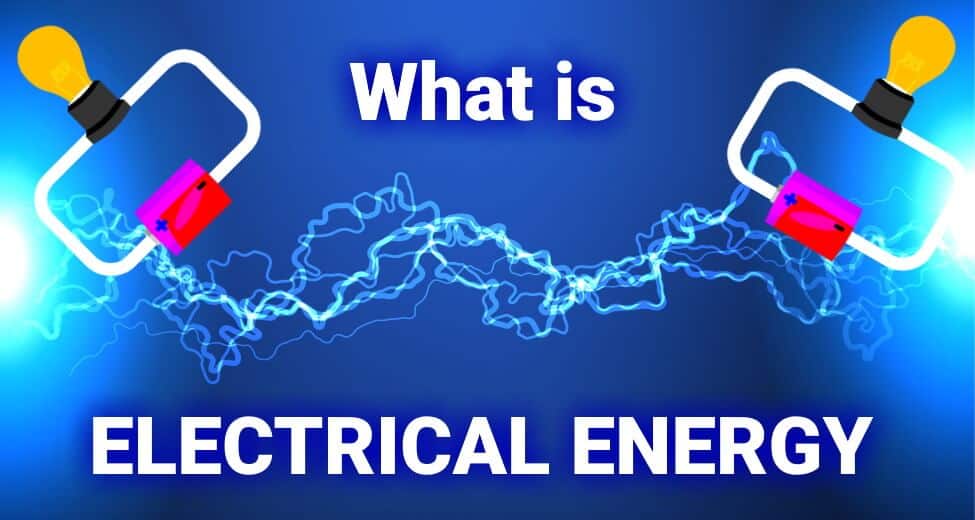 What is Electrical Energy?

Electrical energy is a type of energy caused by the movement of charge or electrons. In other words, a form of energy derived and converted from kinetic energy or electrical potential energy.

Electrical energy is a type of kinetic energy because of the movement of charge from one point to another. When produced, all the electrical energy is the form of potential energy when delivered to the final application which can be converted to another form of energy i.e. from electrical to mechanical through electric motors and heat or motion through motors and light bulbs & heaters etc.

Electrical energy is generated (converted) from other forms of energies in electric power plant houses and stations. The generated energy (in the form of electricity) furtherly provided to the residential and commercial consumers through proper transmission and distribution systems.

Formula and Equation of Electrical Energy

The amount of work done by energy is equal to moving an amount of “Q” coulombs of charges by “V” volts of potential difference (or voltage).

Now, a current of “I” amperes flowing for time “t” second through a circuit having a resistance of “R” ohms, the work done is same as for the above statement i.e. work done or utilized electrical energy is equal to the VD x Q joules. Where VD is the voltage drop across the resistor in the circuit and the value of VD is equal to IR. i.e.

Putting the value of Q = It in equation (i)

Now, putting the value of V = IR in equation (ii)

If 1 volt (potential difference) is applied across a circuit and 1 ampere of current is flowing through it for 1 second, then the work done or amount of electrical energy would be 1 joule or watt-second.

A kilo-watt-hour (kWh) is also known as a board of trade (B.O.T) unit.

Note that energy and work is much related to each other as energy is the ability to do some work while work is the result of changing energy from one form to another. In other words, the amount of expended energy is equal to the work done.

Sources and Types of Electrical Energy

Following are the basic sources of electric energy i.e. converting other energies into electrical energies.

Additional forms of electrical energies are:

Electrical energy (i.e. electricity) is the backbone in our modern society and it is must for our day to day life and you can’t even imagine a life without electricity. There are vast amount of applications of electrical energy such as:

In Short, you won’t be able to see useful things without electricity in household, office and commercial sites.

Why Does the Heating Element Glow but Not the Cord of Heater?