Basically, this circuit is same like staircase wiring circuit using two-way (SPDT) switches used to control the lighting circuit in a hallway and corridors. In corridor wiring circuit, a lighting point is controlled from two different locations using 2-way switches. 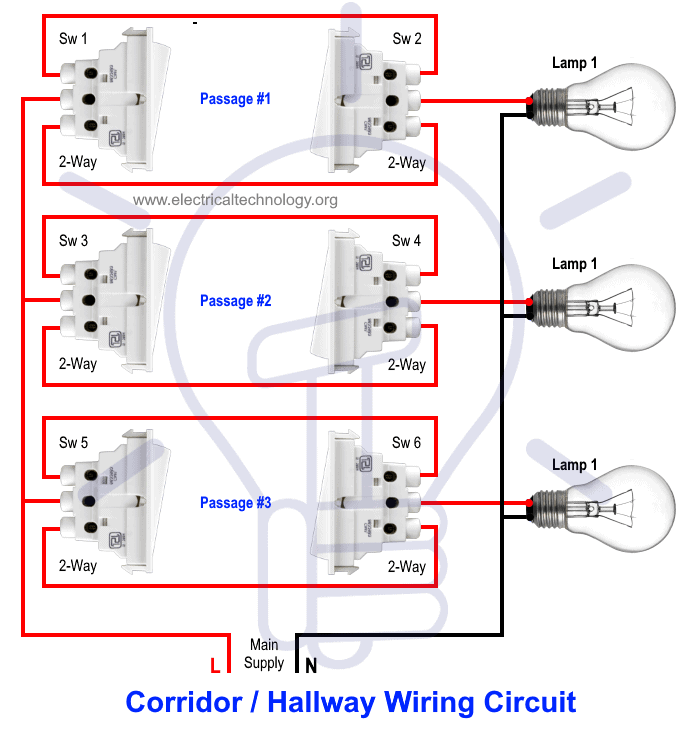 In case of single corridor or single lamp to control from two separate locations, you can connect the neutral to the lamp first terminal and phase (hot or live or line) to common terminal of first switch. Connect the common terminal of second switch to the second terminal of lamp. Finally, connect the upper and lower terminals of both switches with two auxiliary wires. This way, you will be able to control a single light bulb from two different locations using two SPDT switches.

Additionally, If you want to control the light bulb in a corridor from three different locations, you can use an intermediate switch in the middle of two switches.

As mentioned above, we can control a single light bulb from two different places using 2-way switches. In corridor wiring circuit, suppose a person entering the corridor and want to turn ON the light, he can simply switch ON the 2 way switch to do so. When he reach to the room or leaving the corridor, he can again turn OFF the light bulb by switching OFF the SPDT switch. No matter what is the switches positions i.e. upper or lower, the circuit will work the same way as mentioned above.

The following fig shows the working of the corridor wiring circuit.

If you still unable to get the working of the hallway circuit wiring, the following animation gif and video shows it how actually it works.

Note: Use the suitable voltage and ampere rating of switch with appropriate wire size and proper size MCB according to the load rating.

Difference Between Overcurrent, Overload and Overvoltage