What is FACTS and Related Devices? 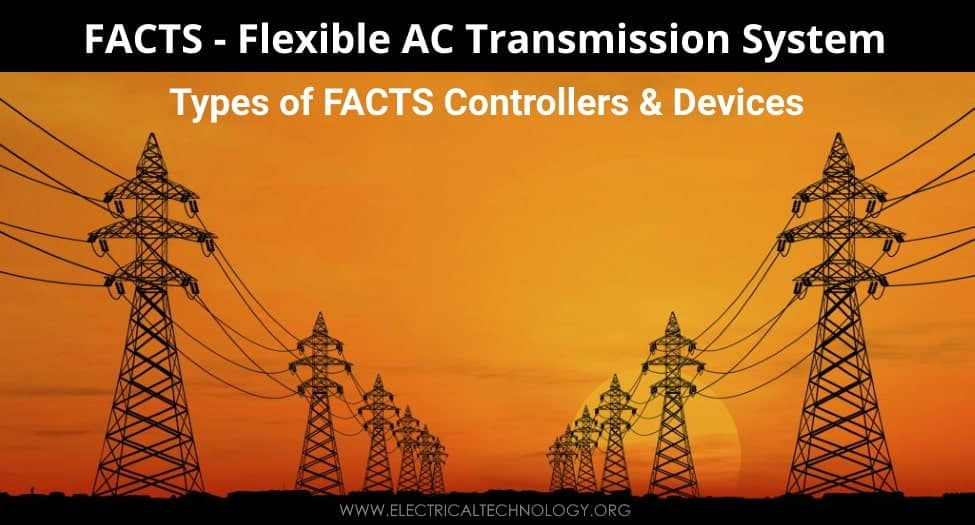 What is the Need of Facts Devices in Power System?

In a power system, coordination between the generation and demand is necessary. The demand for electrical energy increases day by day. To meet this demand, it is necessary to operate all components at their maximum efficiency.

The FACTS devices are nothing but the device used to increase the efficiency of the transmission system. There are three types of power; Active power, Reactive power, and Apparent power. Active power is the useful power or true power that we want to transmit. But load consists of various energy stored elements, that causes the reactive power.

There are various methods are established for compensation of the power system network.

According to the type of connection of compensation devices with the power system network, the compensation techniques are classified into two types;

The power transfer capacity of a transmission line without using compensation device;

Now, we connect a capacitor in series with the transmission line. The capacitive reactance of this capacitor is XC. So, the total reactance is XL-XC.

So, with a compensation device, the power transfer capacity is given by;

Hence, it is clear that, if we use the series compensation devices, approximately 50% more power can be transfer.

If the capacitance of the line increases, the receiving end voltage will increase.

When the line is lightly loaded (less than SIL), the reactive power demand is less compared to the line capacitance. In this condition, the magnitude of receiving end increases than the magnitude of sending end voltage. This effect is known as the Ferranti effect. To avoid this condition, the shunt reactor is used to connect in series with the transmission line at the receiving end. The shunt reactor will absorb extra reactive power from line and maintain receiving end voltage at rated value.

According to the type of connection FACTS Controller with the power system, it is classified as;

The series controllers are used to introduced voltage in series with the line voltage. It consists of a capacitor or reactor (impedance devices). This type of controllers is used to supply or consume variable reactive power.

In most of the case, the capacitors are installed at the end of the line to compensate demand for reactive power. For this purpose, Thyristor Controlled Series Capacitor (TCSC), and Static Synchronous Series Compensator (SSSC) are used. The below figure shows the basic diagram of series connected Controller.

This type of device is used to inject current to the power system at the point of connection. Similar to the series-connected controllers, it also consists of variable impedance like capacitor and inductor.

When a capacitor is used to connect parallel with the power system, the method is known as shunt capacitive compensation. When the transmission line consists of a more inductive load, it operates on a lagging power factor. This method is used to draws current leading to the source voltage to compensate for the lagging load with the help of a shunt connected capacitor.

When an inductor is used to connect in shunt with the power system, the method is known as shunt inductive compensation. Generally, this method is not more useful with the transmission network. But in case of a very large transmission line, the load is disconnected or it operates on no-load or less load condition, due to the Ferranti effect, the receiving end voltage increase then the sending end voltage. to avoid this condition, the shunt inductive compensator is used.

The example of this type of system is SVC (Static VAR compensator) and Static Synchronous Compensator). 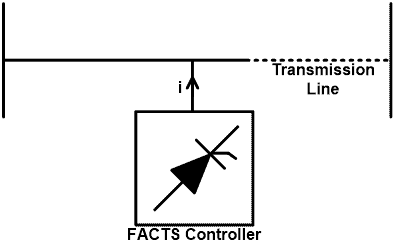 In multilane transmission lines, a combination of separate series controllers is used in a coordinated manner to provide independent series reactive compensation for each line. But it can transfer real power with lines via power link. Or it can be connected with unified controllers that the DC terminals of converters are interlinked together. This will help to transfer the real power to the transmission line. An example of this type of system is the Interlink Power Flow Controller (IPFC). 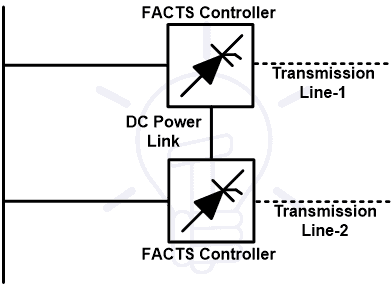 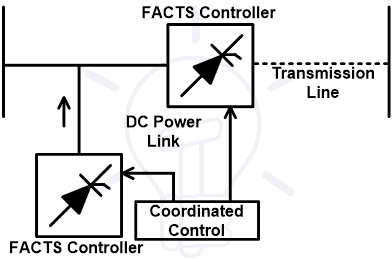 Various FACTS devices are introduced to fulfill their application. Here we will discuss the most used FACTS devices or controller as listed below.

Let’s get understand in brief for each kind of compensator.

The thyristors are used to control the impedance of the system. The total impedance of the circuit can be controlled by controlling the firing angle of a thyristor. A simple block diagram is shown in the below figure.

This is a series compensator device that provides a smooth variable inductive reactance. This device is the same as TCSC, just the capacitor is replaced with the reactor. The reactor stops conducting when the firing angle is 180˚ and it starts conducting when the firing angle is below 180˚. The basic diagram of Thyristor Controlled Series Reactor (TCSR) is as shown in the below figure.

This Compensation technique is similar to the TCSR. In TCSR, the power controlled by controlling the firing angle of a thyristor. Hence, it provides stepwise control. But in the case of TSSC, the thyristor can only be on or off. There is no firing angle. So, the capacitor either fully connected or fully disconnected from the line. It will reduce the cost of the thyristor and reduce the cost of the controller. The basic diagram of TSSC is the same as the TCSC.

It is also considered as a static synchronous generator connected in series with the transmission line. This system aims to increase or decrease the voltage drop across the line. And hence it controls the power flow through the transmission line. This system injects voltage in quadrature with the line current. If supplied voltage leads current, it provides capacitive compensation and if supplied voltage lags current, it provides inductive compensation. The below figure shows the basic diagram of the Static Synchronous Series Compensator. 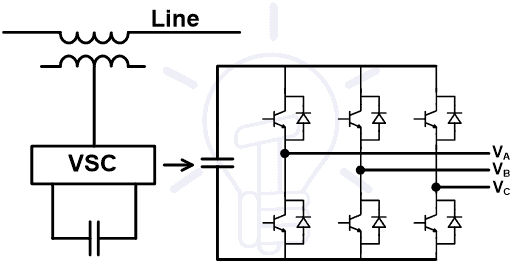 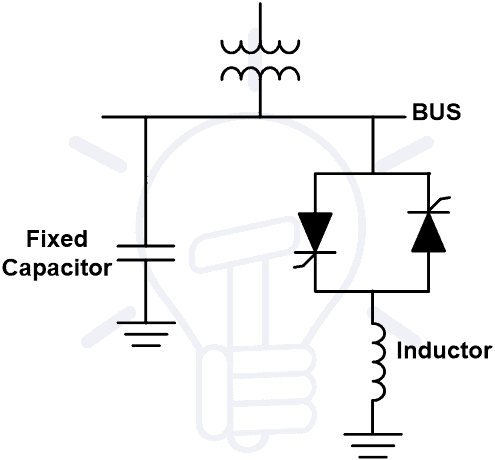 The SVC is used to improve power factor, regulating voltage, reduce harmonics, stabilize the transmission network. This type of device is also used in industries for reactive power control and improve power quality. The most commonly used SVCs are explained below.

In this type of controller, the reactor is connected in series with the thyristor valve. It consists of two thyristors connected in anti-parallel. These thyristors conduct an alternate half cycle of the power supply. The control circuit is used to give pulse to thyristor at every half cycle. The firing angle of the thyristor controls the amount of lagging power supply to the power system. Generally, this device is used in the EHV transmission line to provide reactive power during light load or no-load condition. The basic diagram of a Thyristor Controlled Reactor is as shown in the below figure. 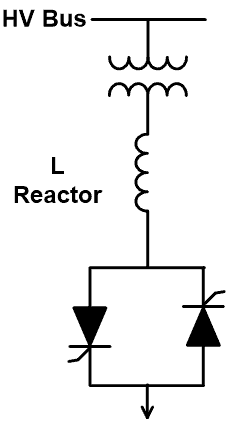 During heavy load conditions, the reactive power demand increases. In this condition, the Thyristor Switched Capacitor (TSC) is used to fulfill the demand for reactive power. Generally, this type of device is used in the EHV transmission line and used in heavy load conditions. This device is the same as TCR just a reactor is replaced by a capacitor. Similar to TCR, the amount of power provide to the transmission line is controlled by controlling the firing angle of a thyristor. The basic diagram of the Thyristor Switched Capacitor (TSC) is as shown in the below figure. 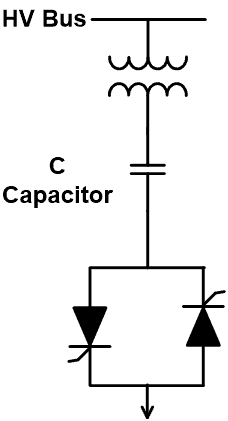 It uses the charged capacitor as the input DC source and converts it into three-phase AC voltage as output by the voltage-controlled inverter. The output of the inverter is synchronized with the AC power of the power system. The inverter is connected in a shunt connection with the transmission line via a coupling transformer. The output of STATCOM can be controlled by controlling the output of an inverter. The basic diagram of STATCOM is as shown in the below figure. 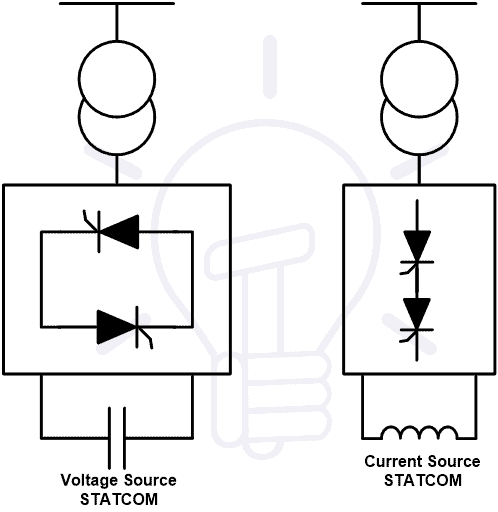 In this type of compensation technique, the number of converters is connected with a common DC link and each converter is connected with a separate line. Therefore, this compensation technique is used in an only multiline transmission system. These converters are also capable to transfer the real power. So, in this method, the real and reactive both powers can equalize between the lines. The basic diagram of this technique is as shown in the below figure. 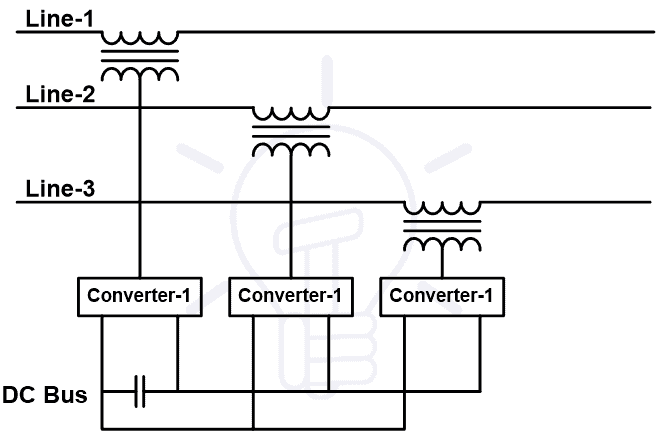 It is a combination of STATCOM and SSSC Coupled via a common DC voltage link. To produce current, it uses a pair of three-phase controllable bridges. And this current is injected into the transmission line using a transformer. It is used to improve the voltage stability, power angle stability, and damping of the system.

This device can control the real or active and reactive power flow in the transmission line. In abnormal conditions, the UPFC will not work. It only works under a balanced sine wave source. It is also used to suppress the oscillation power system and improve the transient stability of the power system. The basic diagram of the Unified Power Flow Controller (UPFC) is as shown in the below figure.

The advantages of FACTS devices are listed below,

The disadvantages of FACTS devices are as listed below.

What is a Contactor ? Types, Working and Applications