Circuit breakers are electrical devices that offer protection against fault current. They use different medium to safely extinguish the arc such as air, oil, SF6 or vacuum etc. MCCB or Molded Case Circuit Breaker uses air as the dielectric medium to break a circuit. Air has a low dielectric strength as opposed to other mediums that is why it is used for protection in low voltage circuits.

Molded Case Circuit Breaker or MCCB is an automatic electrical device. It is a type of circuit breaker that protects the circuit from overloading, short circuit and current surges. It is an advanced version of miniature circuit breaker MCB since it operates like one. However, it offers extra features that make it a superior circuit breaker such as remote closing and adjustable trip settings i.e. its current settings and time settings can be adjusted according to our needs.

MCCB is used to protect the low voltage distribution system. It is available in rating up to 2500 Amps and 1.1 kV. 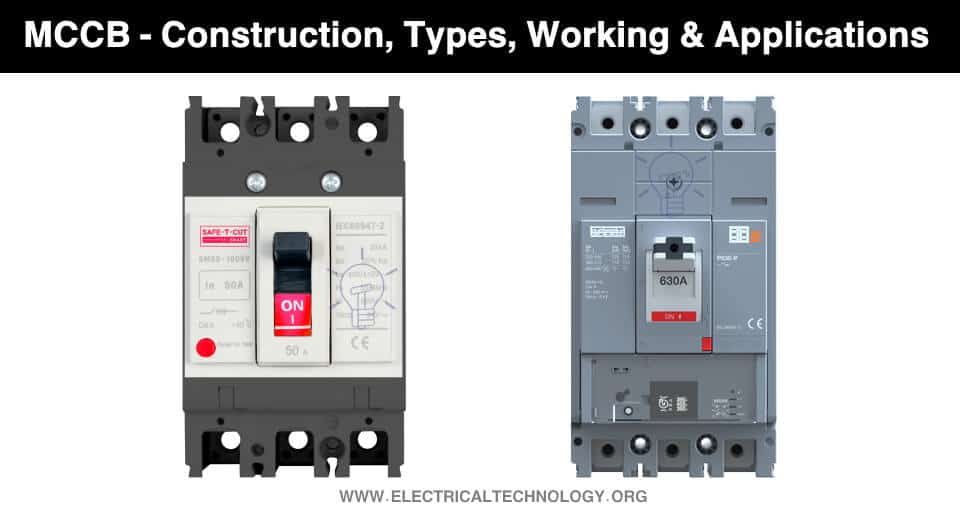 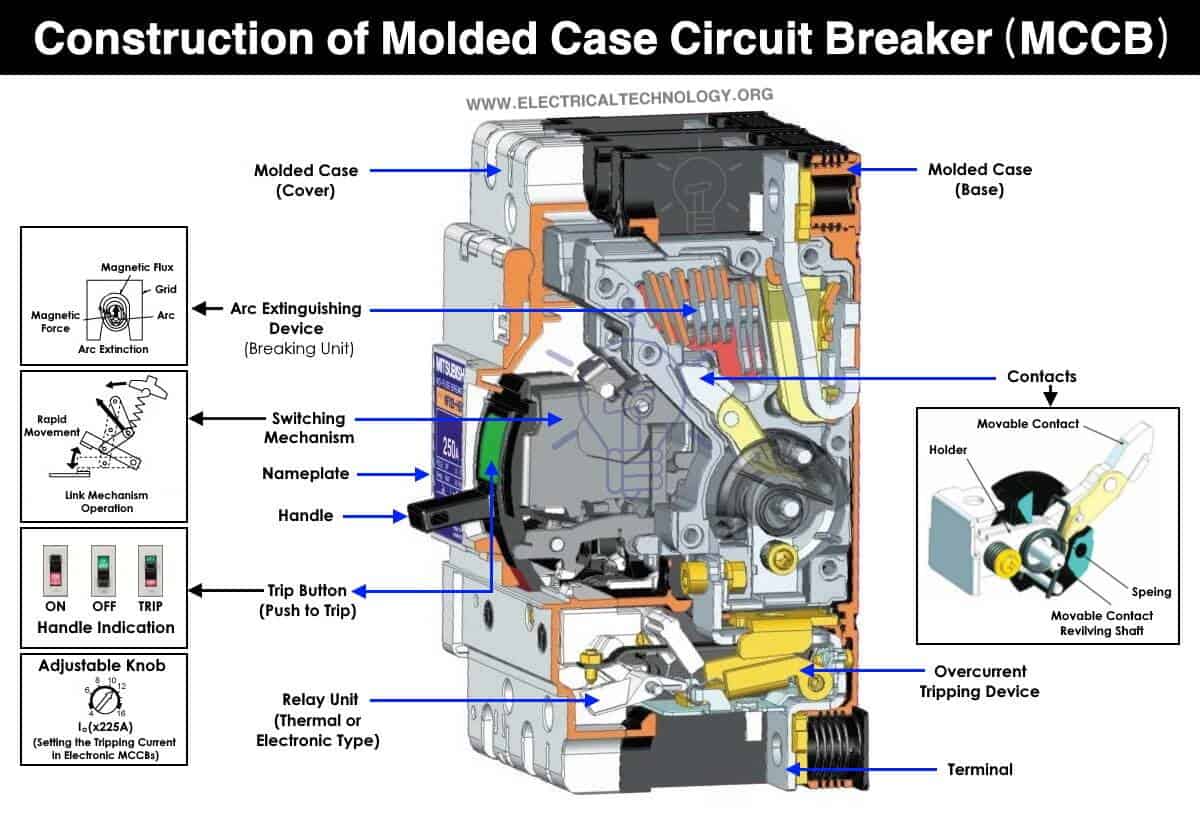 Below is the brief details of each mechanism used in a typical MCCB.

Arc chute is a set of parallel metal plates that are mutually insulated from each other. it helps in extinguishing the arc by splitting the arc and lengthening it. it is also known as an arc divider or arc splitter. These plates are made of ferromagnetic material.

Contacts are the metallic conductors that are responsible for carrying the current to the load. There are two types of contacts i.e. fixed and moving contact. The contacts are made of arc resistance material having low resistivity and corrosion. The quality of the material decides the lifetime of the circuit breaker.

It is the mechanism of MCCB responsible for opening and closing the current-carrying contacts. it is connected with trip unit that triggers the operating mechanism. The trip unit operates on a thermal and magnetic mechanism.

It is the unit responsible to trigger the operating mechanism. The trip unit includes a thermal mechanism for overload, magnetic tripping for short circuits and a test button for testing.

The thermal trip unit uses a thermal mechanism that is a bimetallic strip that bends (and opens the contacts) when the temperature rises due to the overloading.

The magnetic trip unit has a relay that generates a magnetic field when higher currents flow through its solenoid due to the short circuit. it trips the circuit breaker. While the test button is used to simulate the above-said mechanisms and test the response of the circuit breaker.

It is a handle used to open or close the breaker manually. It is also known as a trip-free mechanism because it will trip even if the handle is held in ON position.

The handle could be in either three positions i.e. upward, middle or downward. If the handle is in upward position, it is ON position. If it is in the middle position, the breaker has been tripped while the downward position shows OFF status.

The trip button is used for testing the breaker. It is a red-colored button that trips the operating mechanism when pushed.

Overloading is the condition when the current exceeds a predetermined limit for a specific duration of time. The overloading current can damage the equipment, wirings and can create fire hazards. MCCB offers protection against overloading using a bimetallic strip.

A short circuit is a condition when the live wire comes into contact with each other or with a neutral wire. It can occur due to downed lines or broken or exposed wires or deteriorated insulation of wires. The current flow due to the short circuit is very large and very destructive.

The MCCB can also perform manual switching to switch ON/OFF the power supply to the circuit connected. It can de-energize the circuit in case of maintenance.

Overload occurs when the current exceeds a limit for a prolonged duration. MCCB has a thermal mechanism that contains a bimetallic contact to protect from overload. A bimetallic strip is made from two different types of metal having different rates of thermal expansion. Upon temperature change, the strip bends or contracts.

The main current passes through the bimetallic strip. If the current exceeds a certain limit, the contacts heat up and expand. Due to different expansion rates, the strip bends and trips the circuit.

In electrical devices, the current can overload for short durations of time, it is normal and should not be considered as fault current.  Therefore, MCCB has a time delay that allows the overload current for a short duration of time before tripping the circuit.

MCCB protects against a short circuits using a solenoid that produces electromagnetic force. The main current flows through the solenoid that attracts and repels a plunger responsible for tripping the breaker.

If the current remains below the threshold, the solenoid produces a weak magnetic force that cannot attract the plunger. In short circuit conditions, a very high current flows through the solenoid that generates a very strong magnetic force. It attracts the plunger that trips the circuit.

As MCCB are advanced versions of MCB, they are also classified like them based on the tripping curves. 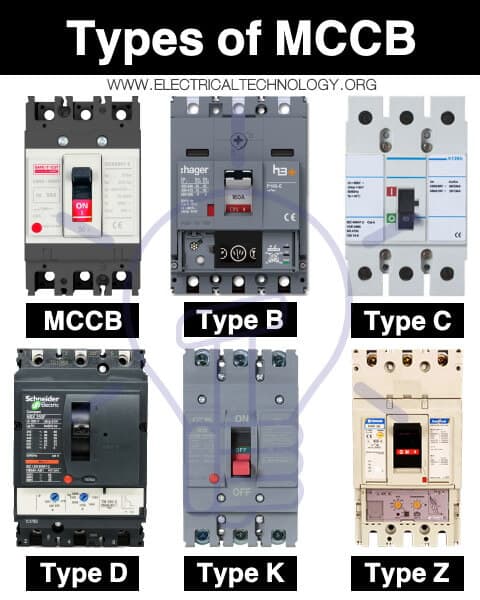 These MCCB trips at current 3 to 5 times its rated current with tripping time of 0.04 to 13 seconds. These are the 2nd most sensitive types of MCCB after type Z as they can tolerate very small surges. It must not be used in places having normal low surges. It will frequently trip even in normal conditions. They are used for resistive loads and other resistive elements.

Such MCCB trips at current surges 5 to 10 times its rated current with tripping time of 0.04 to 5 seconds. As they can tolerate higher surges than type B, they are used for small inductive loads such as small motors, transformers and electromagnets used in industries.

Type D MCCB trips at current 10 to 20 times its rated current with a tripping time of 0.04 to 3 seconds. They can tolerate the highest surges; therefore, they are used for highly inductive loads having very high inrush current such as large electrical motors in industries.

Type K MCCB trips at 10 to 12 times its rated current with a tripping time of 0.04 to 5 seconds. They are used for inductive loads such as motors with high inrush current.

Type Z MCCB is the most sensitive MCCB as they trip at 2 to 3 times its rated current. They are used for sensitive semiconductor-based medical or other expensive equipment that is vulnerable to low current surges.

The MCCB testing is crucial to see if it is operating as it is supposed to, using the following tests.

Insulation Resistance Test: This test shows the level of insulation between the supply, load and between individual phases. In order to perform this test, the MCCB is disconnected and the measurement is taken. The resistance measure must be higher than the manufacturer’s guide to offer the necessary protection.

Contact Resistance Test: This test shows the resistance between the main contacts. It is also known as the millivolt drop test. The MCCB is supposed to carry current even if the voltage is very low. In order to do that, it needs to have very low contact resistance thus having a very low voltage drop.

Tripping Test: These tests are used to simulate how the MCCB responds to fault conditions. They must be performed last as these tests heat up the MCCB.

Thermal Protection Test: This test shows protection against overload conditions. An overcurrent almost 3 to 4 times the rated current is used to simulate a thermal test. If it does not trip, then it cannot provide thermal protection.

Magnetic Protection Test: This test simulates the protection against short circuit or fault current. A solenoid is used to generate the necessary magnetic field for tripping the breaker. A very high current spike is used for a short period of time.

The MCCB is a reliable electrical protection device that requires very little maintenance as it is enclosed in a molded casing and cannot be opened. However, periodic maintenance is required to ensure reliable protection by performing the tests mentioned above as well as visual inspection and cleaning, etc.

Advantages and Disadvantages of MCCB

Since MCCB can handle very high currents, they are used for heavy-duty applications such as in industries.

How to Measure Capacitance using Multimeter?