Machines have been eliminating humans on job tasks for several centuries. As a human being, we definitely need certain actions to be done with a touch instead of pressing buttons. If you are the one looking for such a smart device then here is your halt. In this article, we will be discussing the simple touch sensitive devices which can be used to operate LED or any home appliances.

In simple words, it is a kind of circuit which can be operated or toggled just by a touch. This circuit turns ON and OFF an LED whenever it senses a touch. The best part of this circuit is that very few components are required for the construction. In addition, it is more superior to mechanical switches due to various factor that includes:

There are a number of ways to design the circuit by using different microcontrollers, ICs or even with some transistors. Throughout this discussion, we will discuss the design process for some of the simplest touch sensitive circuits that can be designed easily and are cost effective.

To design this highly durable Touch sensitive switch circuit, we are using a 555 Timer IC as the main component. Here, the touch plate triggers the output of the 555 Timer IC, whenever sense a touch. Before getting started with the design process of this project, let’s give you a quick overview of the 555 Timer IC.

The 555 Timer IC generally operates in three different modes depending upon configuration namely A-Stable, Mono-Stable and Bi-Stable modes. This IC is one of the most popular and widely used for providing time delay, as an oscillator or as a flip-flop element. This 8 pin IC is one of the most commonly used IC in electronic components. Go through the below table to understand the different pins and function of 555 Timer IC.

Gather the following components before starting the design process of the circuit. 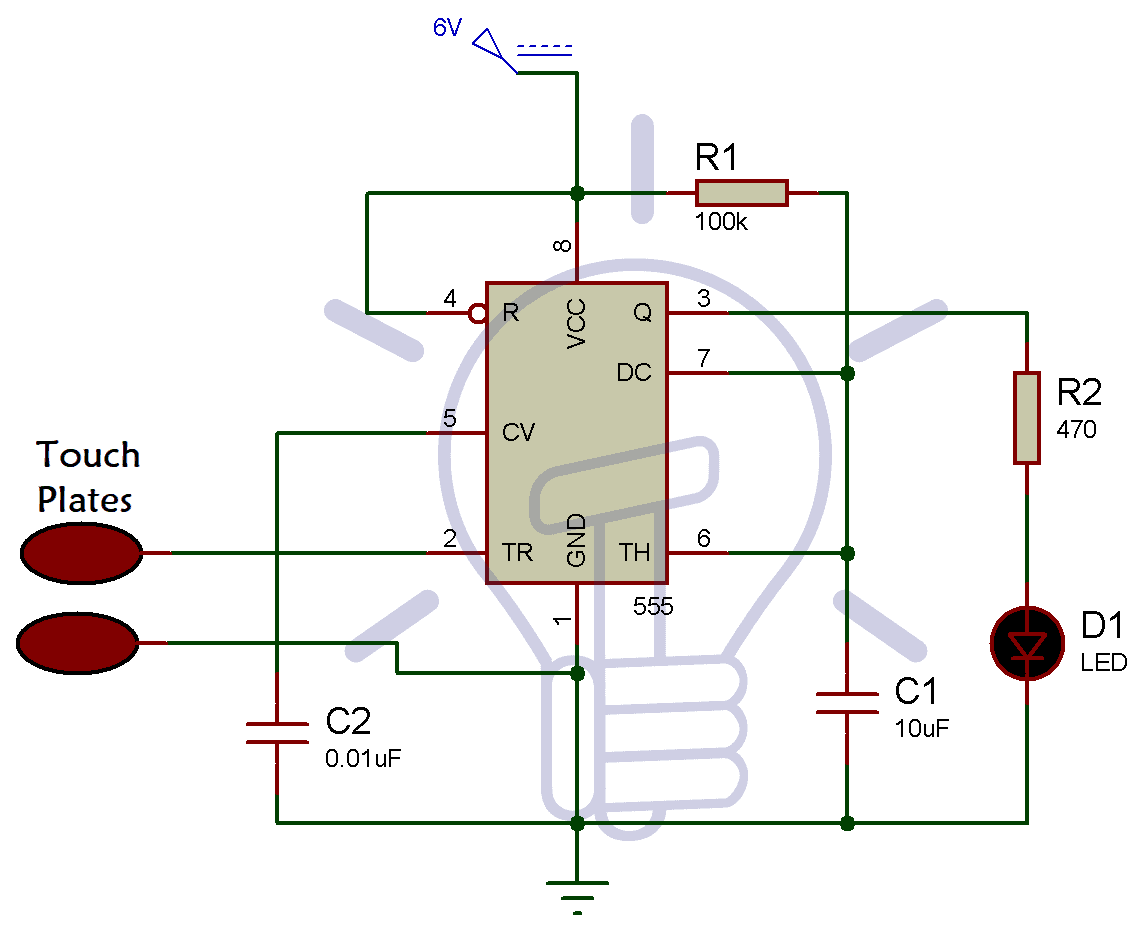 Whenever we touch the conductive plates of the touch sensor, the 555 Timer is triggered. The output pin goes high turning ON the LED for some time. You can also connect a buzzer in place of the LED. The pulse duration generated at the output pin entirely depends on the timing resistor and capacitor of the circuit connected at pin 6 and 7 of the 555 Timer IC. That means you can change the duty cycle of the output pulse by changing the value of capacitor C1. The disadvantage of the circuit is that it consumes more power.

As discussed above, there are a number of ways to design a touch sensitive switch circuit. This touch sensitive switch circuit we are going to discuss now is designed using BC 547 transistor. BC547 is used for amplifying the received input signal. In result, the output obtained has extra sensitivity to the input signal. Take a look at brief discussion of BC 547 Transistor given below.

BC547 is an NPN Transistor which allows a maximum of 100mA to flow across the collector and emitter. It has a gain value of 110 to 800. The gain value determines the amplification capacity of the Transistor. We can’t connect loads that consume more than 100mA using BC 547 Transistor. There are two operating regions of the BC547 transistor. When the Transistor is fully biased then this mode of operation is called saturation region. As soon as the base current is removed, the Transistor becomes fully off and this condition is called cut -off region. 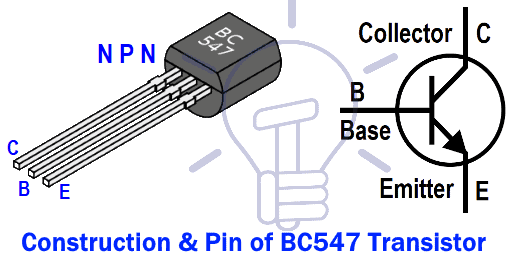 In electronic circuits, BC547 can be used for switching as well as for amplification purpose, we have also described how BC547 behave as a switch or an amplifier.

BC 547 Transistor acts as an open switch during forward bias and will act as a closed switch during reverse bias. Biasing of Transistor can be done by giving the required amount of current to the base pin. Make sure that there biasing current is not greater than 5mA as the current value greater than 5mA will destroy the transistor. To avoid that situation, a resistor is added in series with the base of Transistor. To calculate the resistance at the base pin, use the below formulae.

IB = current at the base terminal

The BC 547 transistor acts as an amplifier when operates in Active region. The DC current gain of the Transistor in this mode can be calculated using the below formulae.

Electrical Characteristics of BC 547:

Go through the list of components and gather the items to design the touch-sensitive switch circuit using the BC 547 Transistor. 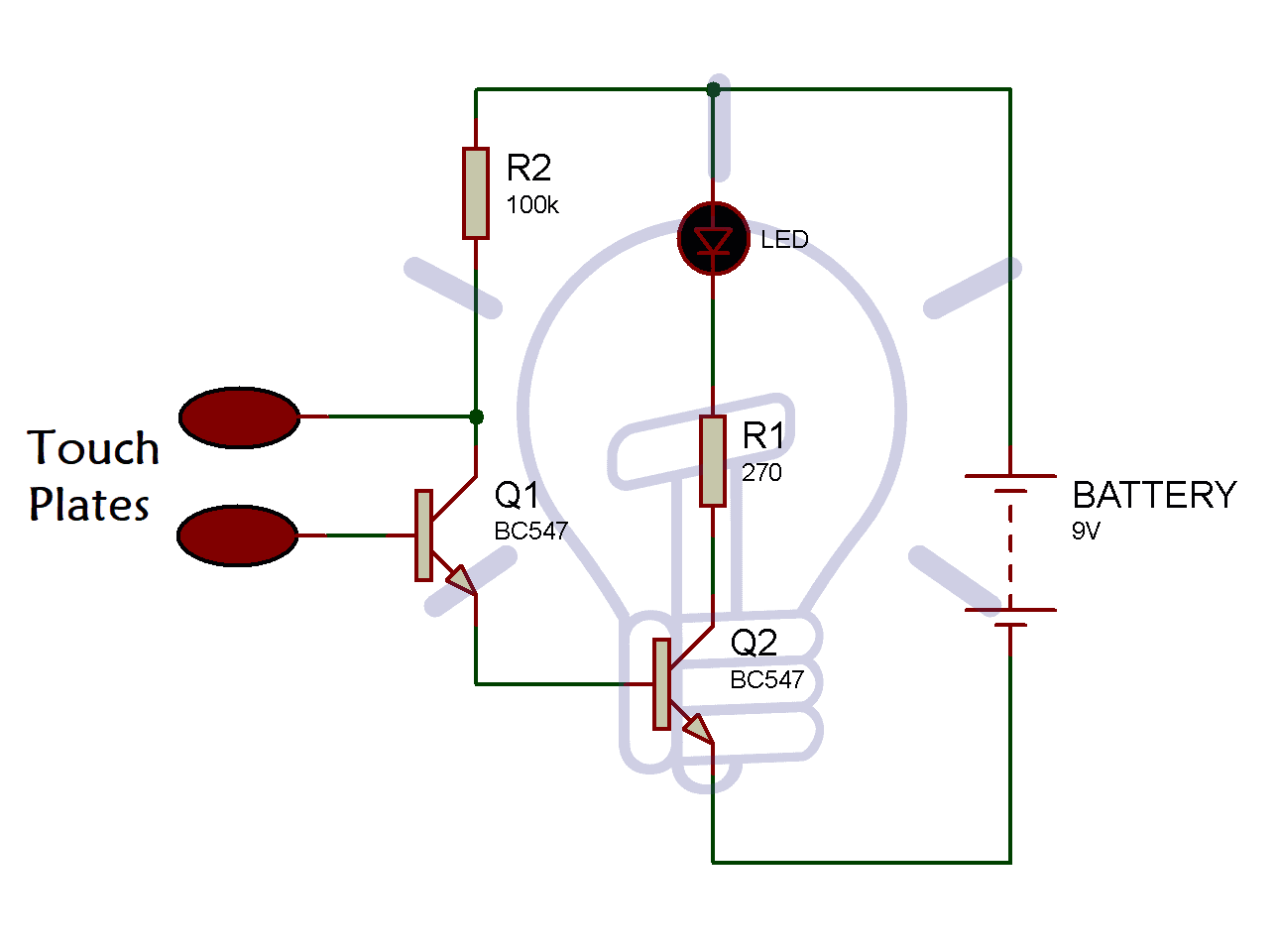 Here, we have used the basic principle of touch-sensitive devices. The skin resistance of the human body is about 600K- 1M. So, whenever the touch conductors sense a touch of the human body, a tiny electric current reach to the base of the transistor through the skin. Therefore, this tiny current triggers the transistor Q1 and current starts conducting from its collector to emitter. As the emitter of Q1 is connected with the base of Q2, Q2 starts conducting and the LED turns ON.

You can even use a single transistor, but the LED will not glow brighter. Therefore, two BC 547 transistors are connected to glow the LED brighter.

Browse the list of some common applications of touch sensitive switch circuit.

You may also check these simple and easy DIY EE Projects: Electrical and Electronics Projects