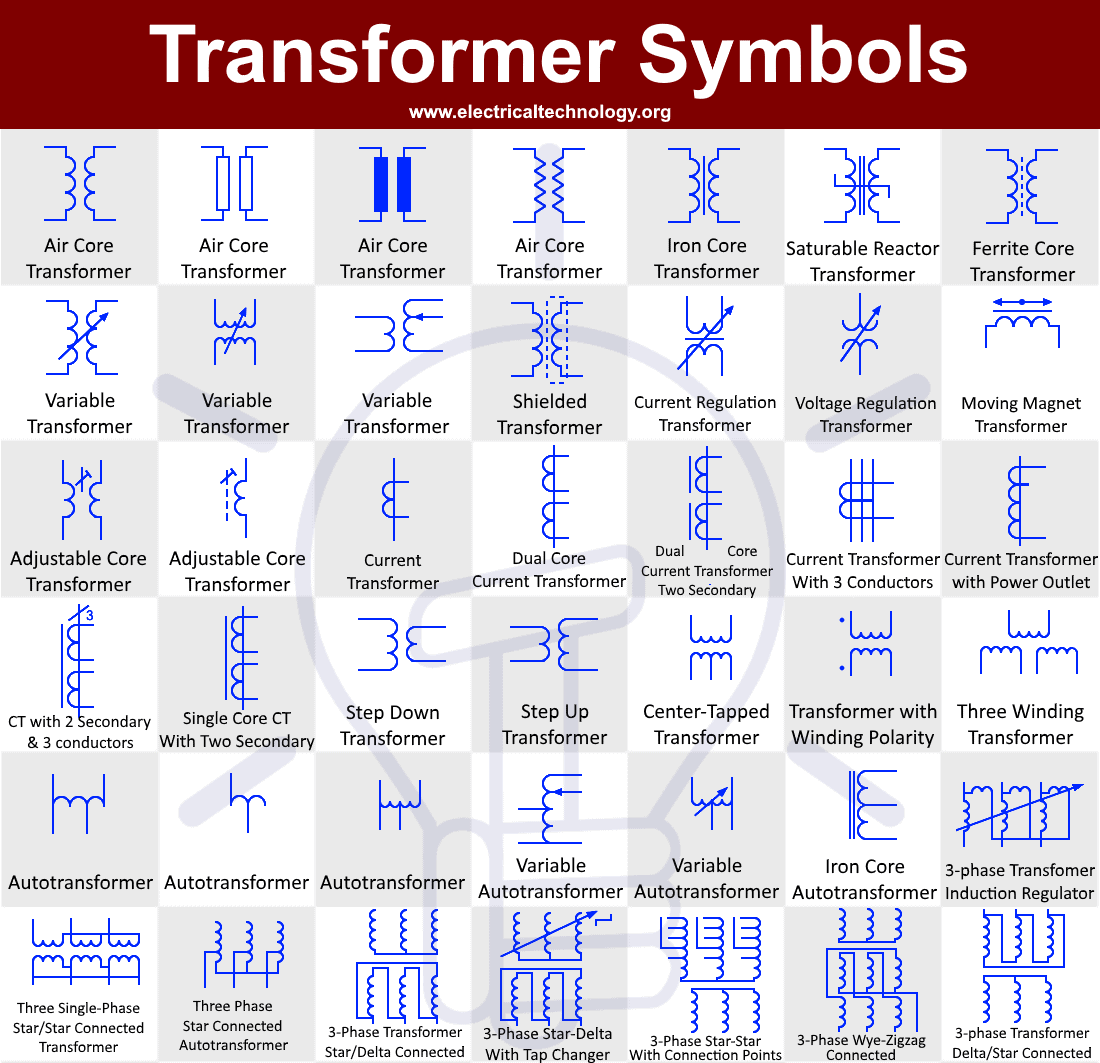 This is a type of transformer whose core can be saturated on purpose. Core saturation is the point where the core is fully magnetized and producing maximum flux. The core saturation is controlled using DC control winding.  During saturation, the reactance decreases that result in increasing of the current flow.

The core of this transformer is made up of iron. The iron has high magnetic permeability which allows it to carry high magnetic flux thus increasing the induction between the windings. The disadvantage of iron core is eddy current loss (core loss) which depends on supply frequency. Thus they are used for low frequency applications.

This symbol represents a transformer made up of ferrite core. The ferrite is a magnetic material having very high magnetic permeability which increases the flux inside the core of the transformer. Also ferrite has very low electrical conductivity which decreases the eddy current losses occurring inside the core.

A variable transformer is a type of transformer that can provide a variable secondary voltage from the same primary voltage. It can vary the output voltage by changing the number of turns or using different tap points or by variable coupling. A Variac is the most common variable autotransformer.

This is an SLD representation of a single phase transformer with separate winding for primary & secondary terminals. The double dashed line represents two terminals for each winding.

Such type of transformer provides constant current even if the voltage increases or decreases. Storable core transformer regulates the current by saturation the core using DC control winding.

Voltage regulation of a transformer means maintaining the secondary voltage constant over a range of load. This kind of transformer regulate its voltage i.e. provide constant voltage with increasing or decreasing the load current.

Current transformer is a type of instrument transformer used for decreasing high alternating current in a line down to safe levels for measurement purposes. The current produced in its secondary is proportional to the current in its primary (conductor) & it is measured by connecting it with a conventional Ammeter.

This is a dual core current transformer that has two cores each with individual secondary winding. Each winding offers different turn ratio providing access to two different current ratings on each individual windings.

Such type of CT is also known as CBCT (Core Balance Current Transformer). It has 3 primary conductors (3 phases) running through its core. The total vector sum of the current in normal condition is zero. When there is an earth fault current, the difference appears through the CBCT which is connected to the alarm system.

This symbol represents a current transformer having 2 secondary windings on a single core. There are 3 primary conductors running through its core. The individual secondary winding provides different current rating & turns ratio.

Choke is a made up of two separate windings wounded on the same core in opposite direction. It is used for blocking high frequency current while it allows direct current & alternating current with low frequency.

Such type of transformer has only one coil. The turns of the coil are divided in fixed proportion which acts as primary and secondary at the same time. there are no electrical isolation between the coil and the secondary voltage is the result of the self-induction as well as electrical conduction. Small size, lower cost & high efficiency is the main advantage of Autotransformer.

This SLD symbol represents a single phase autotransformer. It has only single winding which is used by the same phase conductor. There are two input terminals as well as two output terminals taken from the same coil. They are used for single phase applications.

A variable autotransformer also known as Variac has a sliding brush that moves continuously across the winding increasing or decreasing the turn ratio of the transformer. The voltage in the secondary varies due to the changing turn ratio.

This symbol represents an autotransformer whose winding is wounded around the core made of iron. The iron core increases the magnetic flux which increases the self-induction between the turns.

This symbol represents a three phase voltage transformer. It is made up of 6 windings wounded around a single core. There are 3 windings on each side i.e. primary & secondary side. However the windings can be connected in any of these two most common configurations star or delta.

The primary windings & the secondary windings of such 3 phase transformer is connected together in star or wye configuration. Star configuration is a 4 wire 3 phase system where there is a neutral terminal.

Induction regulator is an AC electrical machine similar to an induction motor used for providing a continuous variable voltage. The primary & secondary windings are connected in series. Its output voltage depends on the turn ratio & it can provide continuous voltage ranging from 0 to maximum output voltage.

It is the symbol used for 3 single phase transformers whose primary and secondary both are connected in star formation. The star configuration is acquired by combining one end of all three windings to make a neutral point. 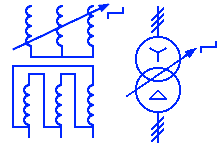 This is a 3 phase star-star connected transformer with multiple tap points for variable voltage. Each connection point provides fixed output voltage depending on the turn ratio with respect to the primary winding. 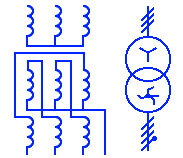 Following is the list of single line transformer symbols. 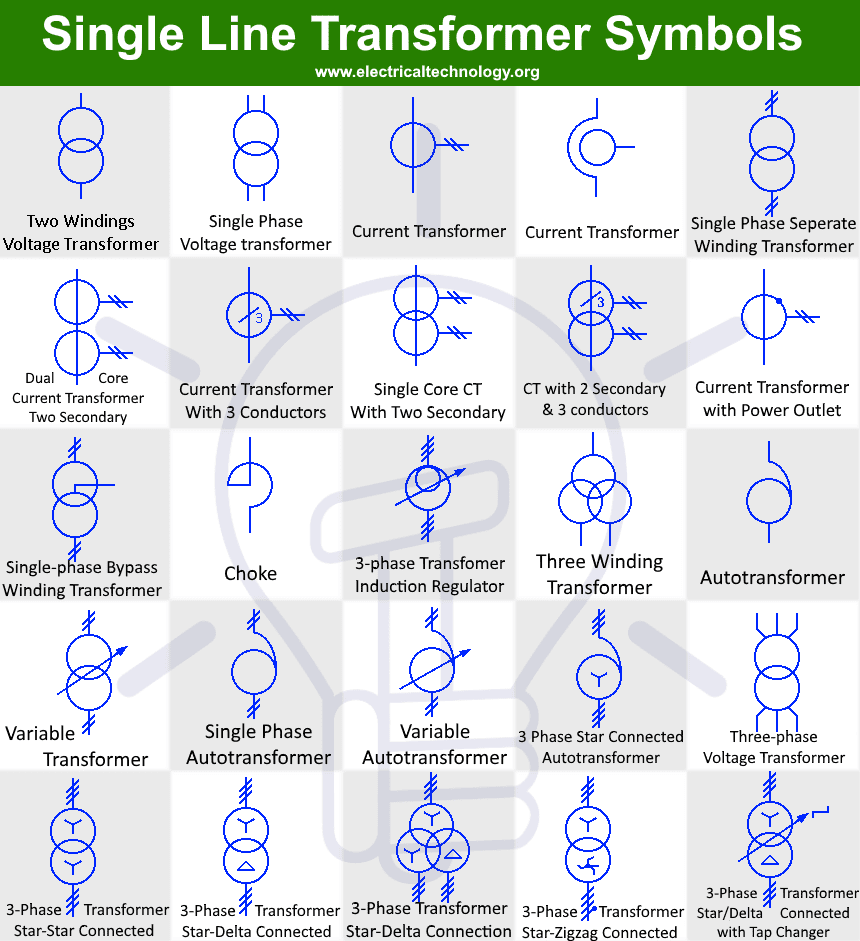