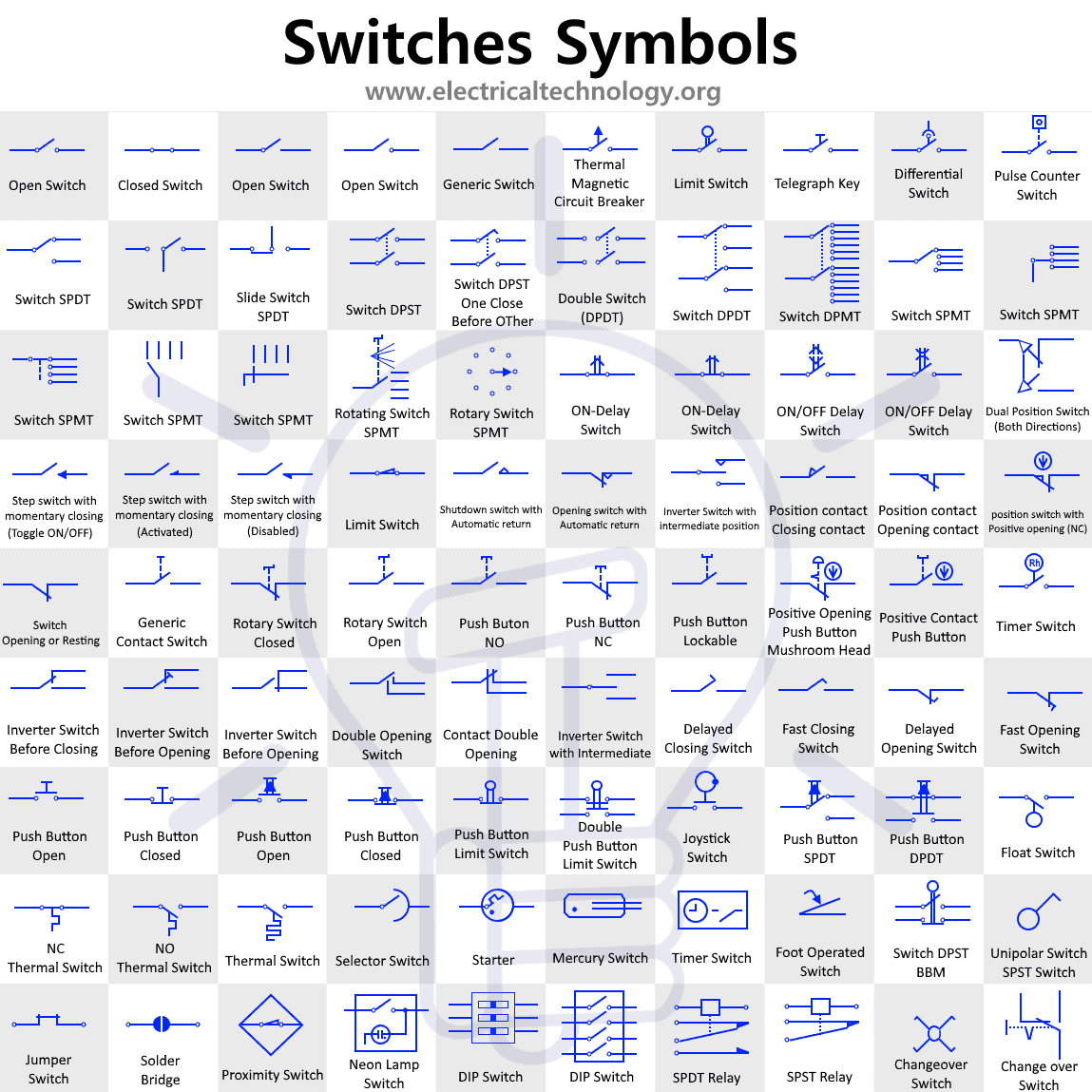 It is the symbol of a generic switch in open condition.

This is a generic symbol for an open switch. A switch is a component that can break or make the circuit. An open switch represents a break circuit & it stops the flow of current through it.

It is a generic symbol for closed switch. a closed switch means the circuit is complete & current can flow through it.

It is the symbol of thermal magnetic switch. it incorporates both electromagnetic  and thermal breaking. During huge current spikes, electromagnet instantaneously breaks the circuit without any delay. But its bimetallic strip provides a little delay when the current exceeds its limit.

The given symbol represent a limit switch. it is operated by mechanical parts of any machine which is used in control systems. It is activated by any other objects or machines parts when it comes in contact with its actuator.

Telegraph key is represented by this symbol. It is a special electrical switch designed for transmitting text messages in Morse code. It connects & disconnects the circuit creating pulses of different length called “dots” & “dashes”.

Differential switches operate on the difference between the phase line current & the neutral line current. If there is any current difference (due to fault current), then it breaks the circuit.

This switch’s actuator is operated by a pulse counter. Whenever the pulse counter reaches a fixed value the switch activates and switches the circuit connected with it.

It is the symbol for single pole double throw (SPDT) switch. Such kind of switch has three terminals with one common terminal. The common terminal is connected with either one of the other two terminals.

Slide switch has a slider that slides back and forth in position for making & breaking the current flow in the circuit. The symbol given is an SPDT slide switch also known as single pole double throw switch.

DPDT stands for double pole single throw. It has two poles, means two different circuits can be connected to it and one throw means that it has only one ON (close loop) position. It either switches ON or OFF the two circuits at the same time.

Switch DPST One close before other

DPDT stands for double pole double through. It is two SPDT Switches combined with common lever. DPDT switch can switch two different circuits at the same time. In either of the two positions, each circuits has close connection with separate terminals.

DPMT stands for double pole multi throw. This switch has two poles i.e. it can switch two independent circuits. Each circuit can be switched to multiple terminals.

It is the symbol for switch having single pole and 4 throws. It has 4 position & it can switch a single circuit by connecting it with any of the 4 terminals.

It is the symbol used for rotating or rotary switch. it has knob which rotates around its axis & it switches the common terminal to any of the output terminals. Rotary switches can have multiple levels (poles) for switch multiple separate circuits & multiple throws.

On-delay switch instantaneously switch form ON(close) to OFF(Open) position. But during siwtching from OFF position to ON postion it takes some time delay. The symbolic representation for On-Delay Switch is given above.

ON OFF Delay Switch

This type of switch has time delay function whenever it switches. Switching from ON to OFF or from OFF to ON, in both situations the switch takes some time delay.

It is the symbol of a Single pole single throw generic pushbutton switch. It has an actuator which switches the circuit ON & OFF by pushing.

It is the symbol of a rotary switch in closed (ON) Postion. It is a single pole switch in Make contact position. It has no automatic return position.

It is the symbol of a rotary switch in open (OFF) Position.

It is a NO (Normally Open) Push button. Normally, it remains in open(OFF) position. Pressing the pushbutton switches it into ON (Close) position but releasing the button return the switch into OFF (open) position.

This is a normally close push button which remains Closed (ON position) normally. It switches into OFF position by pressing the button but after releasing, it returns to Closed position.

This is the symbol of a push button with lockable feature. It automatically return to its normal position but it can be locked in the desired position.

It is a push button with mushroom head. It is positive opening switch means its contacts are open when the device is in its corresponding open position.

It is the symbol for a timer switch. it basically makes and breaks contact when the timer runs out. The timer sets the timer using mechanical clockwork. It provide a time delay for specific applications.

It is the symbol of a switch whose contact does not close immediately but it takes a little time delay.

This symbol represents a fast closing switch. This switch instantly closes (turn ON) after switching its position.

It is a delayed opening switch. During switching its position form ON to OFF, its contacts are still close for some time.

It is a push button limit switch. Limit switch are actuated by the motion of mechanical parts of machines or other objects etc. it switches circuits that control other parts of a machine.

It is also a limit switch but it has two pole i.e. it control two separate circuit. this type of switch breaks one circuit and closes the other one.

Joystick is a switch with a lever or stick connected to the base. The directional movement of the stick connects the different terminals of the switch. it is used in gaming controller pads, in cranes & trucks in the industry.

This is a single pole double throw push button. There is no open position is this switch. It makes contact (ON state) in both positions. Pushing & holding the button will switches the circuit unto the other terminal. Releasing the button will return the contact to its original position.

This is a double pole double throw switch. it switches two separate circuit but pressing the button will break one circuit and closes the other one. Also upon releasing the button, the switching will be reversed.

Float switch is a switch that controls a circuit or machine inside a tank full of liquid. It detects the level of the liquid and switches ON or OFF when the liquid level rises or fall.

Thermal switch is temperature dependent switch that switches a circuit when it crosses a preset temperature. However, it returns to its normal position when the temperature becomes normal.

It is also a thermal switch it is normally open in room temperature.  Increasing the temperature makes the contact switching it into ON position & reducing it switches it into OFF position.

Selector switch is a rotary switch with two or more than 2 positions. It can switch one or more than one circuits at the same time.

Also known as electronic fluorescent starter is used to soft start the fluorescent lamp by preheating the cathode and send a controlled pulse to the lamp to start glowing.

Mercury switch has mercury inside a vessel in between the two terminals of the switch. The movement of the mercury closes & opens the circuit when the vessel is tilted. The mercury is a conductor & it connects the terminals when it touches it. Mercury switch can be used where there is motion like tilting, rolling etc.

This symbol represents a foot operated or foot pedal switch. it is a single pole switch which control a circuit or motor usually used in controlling heavy machinery. It has a very rugged design because it is being operated by foot.

It is a double pole single throw switch with break before make (BBM) mechanism. It switches two circuits but first it breaks (open) one circuit and then makes (close) the other one.

Proximity switch is a sensor that detects an object with in close range. It is non-contact sensor switch. Whenever an object comes in its range, it switches & corresponding circuit is activated. This circuit can be an alarm or counter or any type of logic circuit.

This is a simple single pole single throw switch with a neon lamp. The neon lamp acts an indicator for showing the flow of current through the switch.