It is a symbol of generic IC (integrated circuit). It is a small chip made up of semiconductor material upon which multiple micro electrical components are fabricated to perform specific task and reduce size.

This is the symbol for 555 Timer IC. It has three modes of operations i.e. Astable (Oscillator), Monostable (Timer) & bistable (Flip-flop). It is the most used IC worldwide & Its applications are limitless depending on the modes in which they are used.

It is the symbol for BCD to 7 Segment display decoder. It converts Binary coded decimal which a 4 bit binary signal into 7 output lines, each controlling a separate segment of the 7 segment display.

It is a simple 4 bit binary counter that counts from 0 to 15 and then resets to 0. It is operated by a clock signal & upon each clock cycle it increases in a single digit count. The number 16 represent the number of MOD i.e. the maximum number of states it has. It divides frequency of the clock signal by this number.

This is the symbol for digital Decade counter also known as frequency divider. It counts from 0 to 9 then resets instead of counting in binary digits. Each clock cycle at the input increases the output by 1. This decade counter divides the input frequency (input clock) by 10.

This is a basic memory unit, a building block of the memory unit in any device. It is an SR latch which stores a single bit of data. The S-R stand for set & reset function of the latch.

A half adder circuit adds two single-bits binary inputs A & B & provides their sum S & the carry bit C. the reason it is called a half adder is because it cannot takes in the carry from the previous additions.

This is the symbol for digital binary full adder. It adds two single-bit binary numbers A & B and provides their sum S with carry out C. The full adder also adds in the carry out from the previous addition that is why it is called full adder. Multiple full adders are stacked together to perform addition of multiple bits numbers.

Digital multiplexer or Mux is a multi-input single-output device. It is digital selector switch that selects one output from multiple input data lines. The binary combinations of the selector bits S0…S2 select the specific data line D0…Dx as the output Y. For example for S = 010, Y = D2 & for S = 110, Y = D6.

DeMultiplexer or DeMux is a single-input Multi-output device. It is also a selector switch & operates oppositely to the multiplexer. It has a single data input line D & it passes it to one of the multiple output lines Y0…Yx which is selected through the selector bits S0…S2.

It is a memory unit made up flip-flop & it used for storing temporary data in digital devices. The Input data is serially fed to the shift register through the input line D which is stored in the flip flop. The data stored in shift register can be accessed both in serial & parallel using Q & Q0…Q3 respectively.

CPU stands for Central Processing Unit, also known as the processor, is a chip inside a computer. It is the brains of the computer that performs the tasks by executing the instructions carried out by the program.

It is a generic Symbol of DAC showing only its input & output. DAC also known as digital to Analog Converter is an electronic IC that converts any Digital signal into Analog signal. They are used in such system where the device cannot operate on digital data so the DAC converts the signal into analog.

This is detailed DAC symbol showing the input ports for digital signal in binary form & the Vref which is the voltage reference for the output analog signal to be generated.

It is a generic ADC symbol. ADC stands for analog to digital converter. It works exactly opposite to the DAC. It converts any analog signal into digital signal in binary format. It is used in almost all digital devices that depend on Analog data in some way.

This is 4 to 1 multiplexer symbol. It selects from one of the 4 input lines which flows through output Y. The selector input S is used in selecting the input line.

It is the symbol of 1 to 2 Demultiplexer used for transferring one input lines onto two distinct output lines. The selector switch S selects one out of two output lines.

This symbol is used for 1 to 4 Demultiplexer. It shows a single input line I transferred onto one of the 4 output lines Y which is selected by the selector input S.

It is the symbol of Sixteen Segment Display also known as SISD. It has Sixteen LEDs configure in such geometry to display characters such as Arabic numbers, Thai number & latin letters etc.

It is a seven segment display symbol. It is used for showing  decimal numerals and English alphabets. However it can be designed to display numerous characters.

It is the symbol of 5×7 dot matrix display. It has 5 columns and 7 rows of dot shaped LEDs next to each other. It is used for displaying characters & shapes in digital devices.

It is a symbolical representation of two wires or traces in a digital circuit or schematic that is not connected with each other.

It is visual representation for showing a connection between two wires or traces in a schematic.

It is the symbol of a programmable connection. This connection is designed to close or open by blowing the fuse through programming. 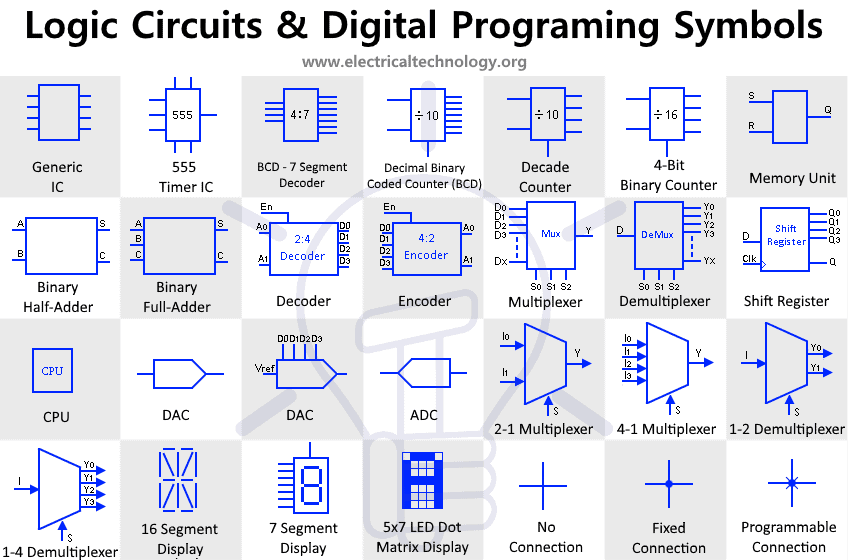