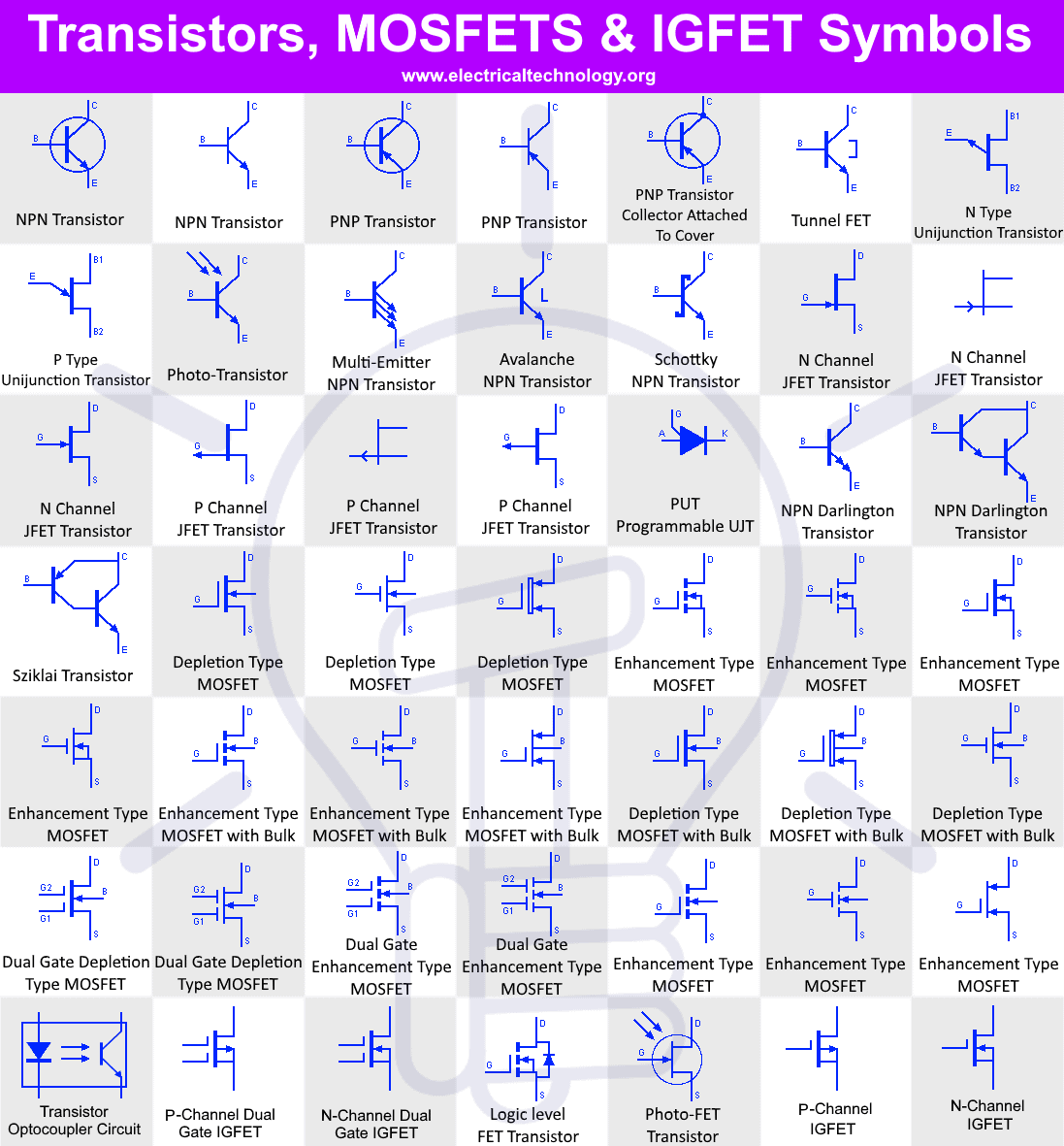 An NPN bipolar Junction transistor (BJT) made up of 3 layers of semiconductor material. A P type semiconductor material is sandwiched between two N type materials. It is a current controlled current device used for switching or amplification. The current entering through the base terminal is amplified into the current entering through the collector.

This symbol represent a PNP BJT Transistor. it is made up of N type semiconductor meterial sandwiched between two P type materials. PNP transistor amplify when its base is negative with respect to collector & emitter. In other words it ampify the current flowing out of its base terminal.

TFET or Tunnel Field effect transistor is a type of MOSFET whose structure looks similar to that of a traditional MOSFET but its switching mechanism differs. They use the phenomenon of quantum tunneling that makes it a perfect candidate for low power electronics.

Unijunction transistors are made up of lightly doped base with a heavily doped emitter creating only one junction. it is also known as “double base diode”. The potential at the emitter with respect to the base controls the current through the base. N type UJT is made up of lightly doped P-type base (B1 & B2) with a heavily doped N type emitter (E). They are mostly used for triggering thyristors.

This is a P-type unijunction transistor made from a bar of lightly doped N-type material with a heavily doped P-type part near the base 2. It operation is similar to N type UJT  but the voltages polarities are reversed,

Photo transistor is a light dependent transisitor that converts the light energy into electrical current between the collector & emitter. It operates the same as Photo-diode but it is more sensitive with the extra gain factor. They are used in light sensing applications.

It is a special type of BJT (bipolar junction Transistor) that has multiple emitters. The emitters are independent of each other & the current through each emitter depends on its individual voltage with respect to the base of the transistor. These are mostly used in TTL (Transistor-transistor Logic) NAND gates.

This is a type of BJT specially designed to operate in the avalanche breakdown region where the phenomenon of negative differential resistance occurs. At this point, increasing the voltage causes to decrease the current. Thus the avalanche transistor has the ability of very fast switching of heavy currents.

It is made up of a schottkey diode and a transistor. The schottkey diode is connected between the base and the collector. It keeps the transistor from saturating by shunting the excessive current. it helps in fast switching due to the time delay in removing the stored charges in saturated mode.

This symbol represents a P-channel JFET (denoted by arrow pointing outwards). A P channel JFET is made up of P-type channel made between Drain & Source while the gate is made of N-type material. The P channel JFET switches off by maintaining positive gate to source voltage.

PUT or programmable UJT is a four PN layer device just like the thyristors but it operate like UJT if programmed with two external resistors. It has anode, cathode & a gate terminal. The voltage at the gate terminal switches the PUT on & off when it crosses its cutoff level.

It is a special type of transistor made by connecting the emitter of one BJT with the base of another BJT to increase the current gain & sensitivity. It can be made from NPN or PNP transistors by connecting it in this configuration. the total gain of Darlington transistor is the product of gains of individual BJT & the voltage drop is twice at base-emitter.

MOSFET or Metal-oxide Semiconductor FET is another field effect transistor whose gate is completely isolated from the current carrying channel that is why it is also known as IGFET (insulated Gate FET). It is a voltage controlled current device. The Depletion type MOSFET is normally ON at zero gate-source voltage. They switch OFF by applying positive or negative gate-source voltage for P channel or N channel MOSFET respectively.

Such type of enhancement MOSFET has four terminals. The extra terminal is known as Bulk or body terminal. It is neither an input nor an output terminal but it is used for grounding the substrate. It is usually internally connected with the source terminal which is why they are omitted from their symbol to show a clear schematic with less clunky wiring.

This depletion type MOSFET has an extra separate terminal for the bulk or body. It is shorted with the source terminal of MOSFET for operation. It grounds the substate.

Photo FET Transistor is a light dependent FET that switches when the light intensity upon its junction changes. They are used in opto-couplet or opto-isolator to electrically isolate two circuits by using an LED between them.