What Happens When You Connect an Electrolytic Polarized Capacitor in The Reverse Polarity?

In an electrolytic capacitor, there is an insulating layer used as dielectric (solid, liquid or gas material) sandwiched between the two electrodes. There are two metal plates where the first plate as positive “”anode” is covered with the insulating oxide layer through anodization and electrolyte is used as the second terminal known as “Cathode”. There are three types of electrolytic capacitors viz aluminum, tantalum and niobium capacitors. 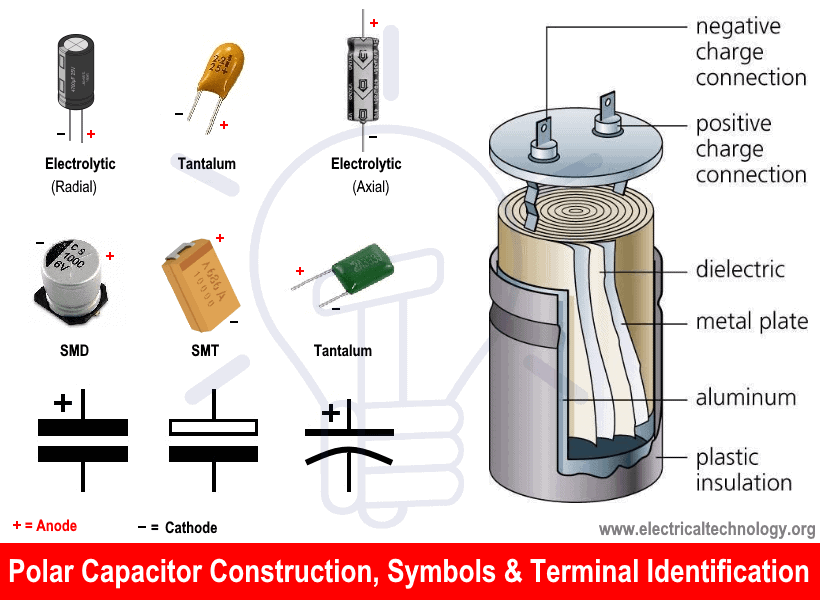 The aluminum foils with paper in-between are wound together. They are impregnated in the electrolyte and then covered in a casing of aluminum. That’s enough briefing, let’s focus on the topic right now.

What Happens to the Capacitor If Connected to the Reverse Voltage?

Accidents are real and they occur often due to intentionally or by chance. Now let’s see what happens if a polar or electrolyte capacitor connected to the reverse terminal of DC power supply i.e. Negative to positive and vice versa. 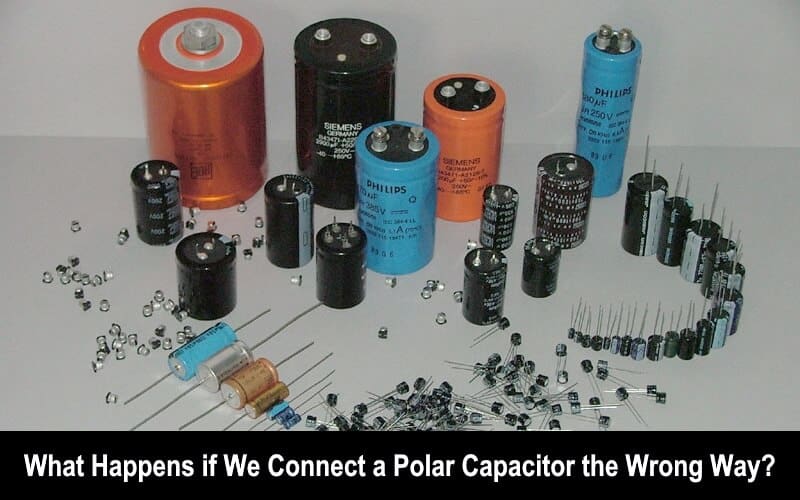 Let’s discuss the last scenario as first to be on the safe side as a first priority. In case of reverse connection, the capacitor will not work at all and if the applied voltage is higher than the value of capacitor rating, the larger leakage current will start to flow and heat up the capacitor which lead to damage the dielectric film (the aluminum layer is very thin and easy to be broken) as compared to the applied DC voltage) even explode the capacitor.

Care must be taken into account while connecting a polarized capacitor with DC power supply with proper terminals. Otherwise, the reverse voltage may damage the overall capacitor with a bang or pop in a very short time (few seconds). This may lead to serious injury or hazardous fire (Tantalum capacitors do it happily).

The aluminum layers in the electrolytic capacitor only bear the Forward DC Voltage (same as forward bias diode). The reverse DC voltage across the polar capacitor will lead to capacitor failure due to short circuit between its two terminals via dielectric material (same as reverse bias diode operating in the breakdown region). The phenomenon is known as valve effect.

Keep in mind that the electrolyte used in the foil and electrolytic capacitor may heal and reform the capacitor to its normal position if very low reverse voltage has passed in the capacitor. So if you have applied a reversed voltage on a polar capacitor and using for hobbies projects, You must test and check the capacitor before placing in the circuit or replace with new one in case of commercial and industrial usage.

In case of reverse voltage (negative source to positive terminal and vice versa) will blast the aluminum electrolytic capacitor due to the hydrogen ion theory. In this wrong wiring connection, there is positive voltage across the electrolytic cathode and the negative voltage appears across the oxide layer. In this situation, the hydrogen ions (H2) gathered in the oxide layer will pass through the dielectric medium between the two plates and reach to the metal layer where it converts into Hydrogen gas. The pressure created by Hydrogen gas is sufficient to break the capacitor and the case may break out with blast and vapour.

Resistivity of Electrolytic Capacitor Become Smaller When Terminals are Reversed

The dielectric medium used in between the two electrodes of electrolytic capacitor is unidirectional i.e. it will pass the current only and only in one direction, same like the PN Junction diode. In case of reverse connection, the dielectric medium will not act as a resistance or an insulation material. Hydrogen gas will be generated in a very few seconds and the capacitor will act as a short circuit for the DC source which leads to capacitor failure (with bulging top or overall wear and tear component).

The little dude as polarized capacitor is very dangerous and happily blows up and draws blood in case of changing and revering its terminals or more leakage or forward current and voltage other than the rated voltage. Please wear safety glasses and don’t touch any part(s) of the circuit while playing and designing the circuits using capacitors.

What Happens if a Battery is Connected to the AC Supply?

What is Voltage? its Unit, Formula, Types & Applications