Thyristors are the most used components in modern electronics and logic circuits are used for switching and amplification. BJT and MOSFET are the most used types of the transistor where each of them has its own advantage over the other and some limitations. The IGBT (Insulated Gate Bipolar Transistor) takes the best parts of both BJT and MOSFET into a single transistor. It takes the input characteristics (high input impedance) of MOSFET (Insulated Gate) and the output characteristics of BJT (Bipolar nature). 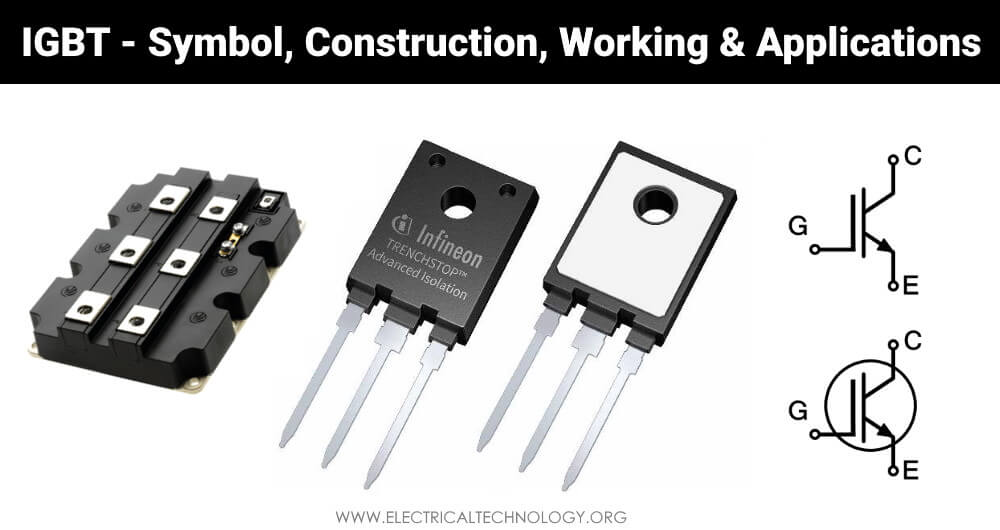 The IGBT or Insulated Gate Bipolar Transistor is the combination of BJT and MOSFET. Its name also implies the fusion between them. “Insulated Gate” refers to the input part of MOSFET having very high input impedance. It does not draw any input current rather it operates on the voltage at its gate terminal. “Bipolar” refers to the output part of the BJT having bipolar nature where the current flow is due to both types of charge carriers. It allows it to handle very large currents and voltages using small voltage signals. This hybrid combination makes the IGBT a voltage-controlled device. 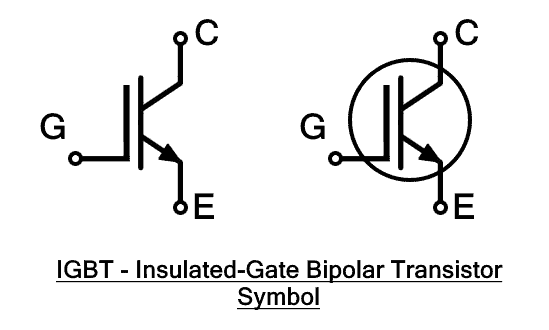 It is a four-layer PNPN device having three PN junctions. It has three terminals Gate (G), Collector(C) and Emitter (E). The terminal’s name also implies being taken from both transistors. Gate terminal as it is the input part, taken from MOSFET while the collector and emitter as they are the output, taken from the BJT.

IGBT is made of four layers of semiconductor to form a PNPN structure. The collector (C) electrode is attached to P layer while the emitter (E) is attached between the P and N layers. A P+ substrate is used for the construction of IGBT. An N- layer is placed on top of it to form PN junction J1. Two P regions are fabricated on top of N- layer to form PN junction J2. The P region is designed in such a way to leave a path in the middle for the gate (G) electrode. N+ regions are diffused over the P region as shown in the figure. 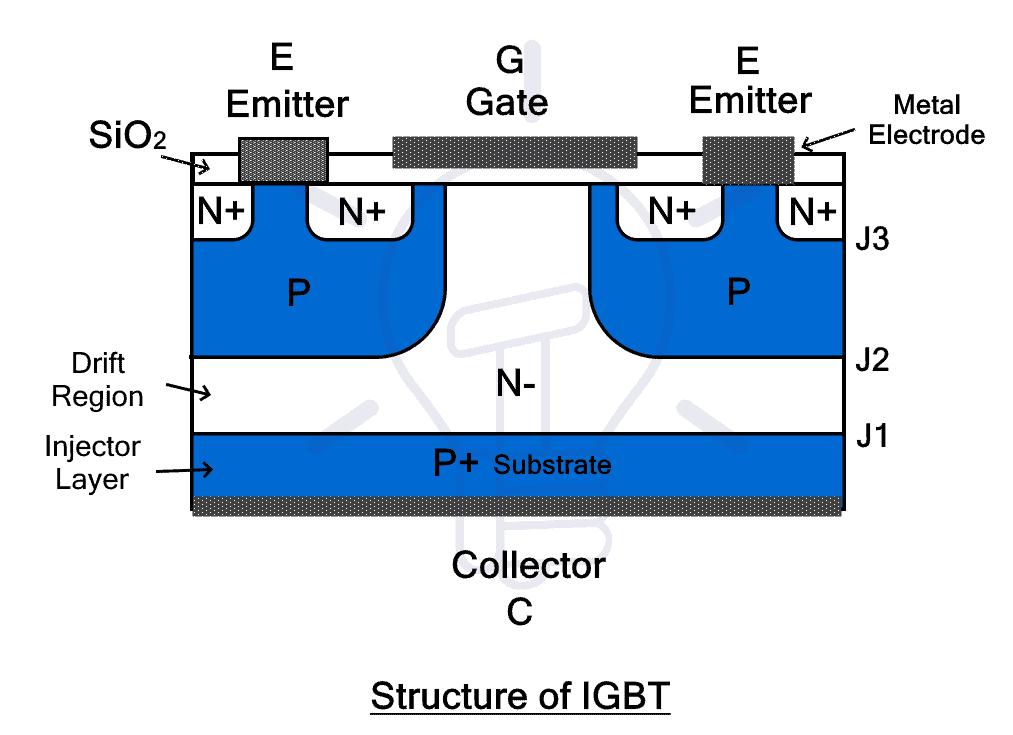 The emitter and gate are metal electrodes. The emitter is directly attached to the N+ region while the gate is insulated using a silicon dioxide layer. The base P+ layer inject holes into N- layer that is why it is called injector layer. While the N- layer is called the drift region. Its thickness is proportional to voltage blocking capacity. The P layer above is known as the body of IGBT.

The N- layer is designed to have a path for current flow between the emitter and collector through the junction using the channel that is created under the influence of the voltage at the gate electrode.

As we know that IGBT is the combination of input of MOSFET and output of BJT, it has an equivalent structure to N-channel MOSFET and a PNP BJT in Darlington configuration. The resistance of the drift region can also be incorporated. 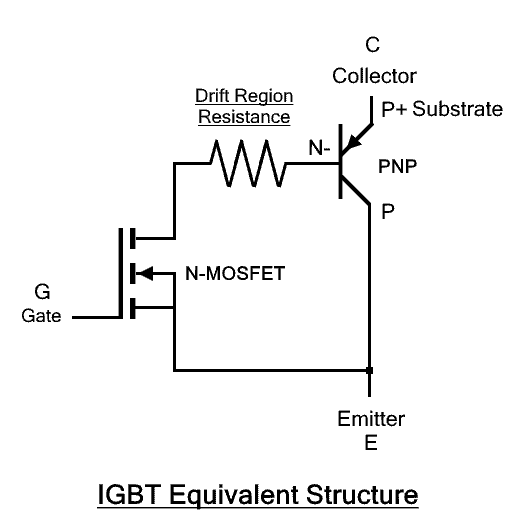 If we look at the structure of the IGBT above, there is more than one path for the current to flow. The current path is directed from collector to emitter. The first path is “collector, P+ substrate, N-, P, emitter”. This path is already mentioned using the PNP transistor in an equivalent structure. The 2nd path is “collector, P+ substrate, N-, P, N+, emitter”. To include this path, another NPN transistor must be included in the structure as shown in the figure below. 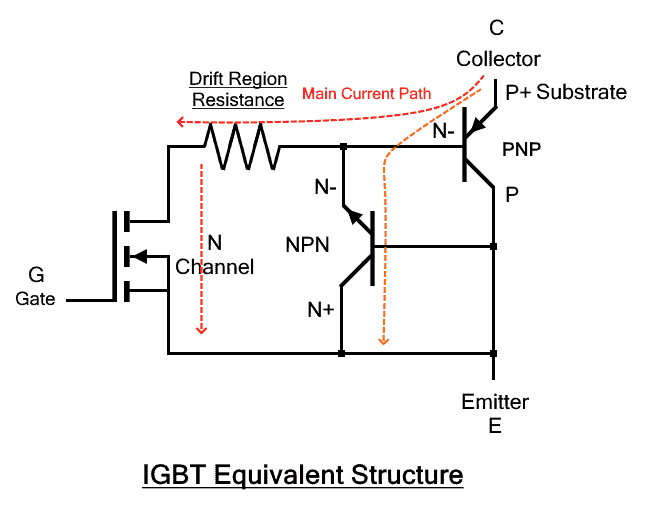 The two terminals of IGBT collector (C) and emitter (E) are used for the conduction of current while the gate (G) is used for controlling the IGBT. Its working is based on the biasing between Gate-Emitter terminals and Collector-Emitter terminals. 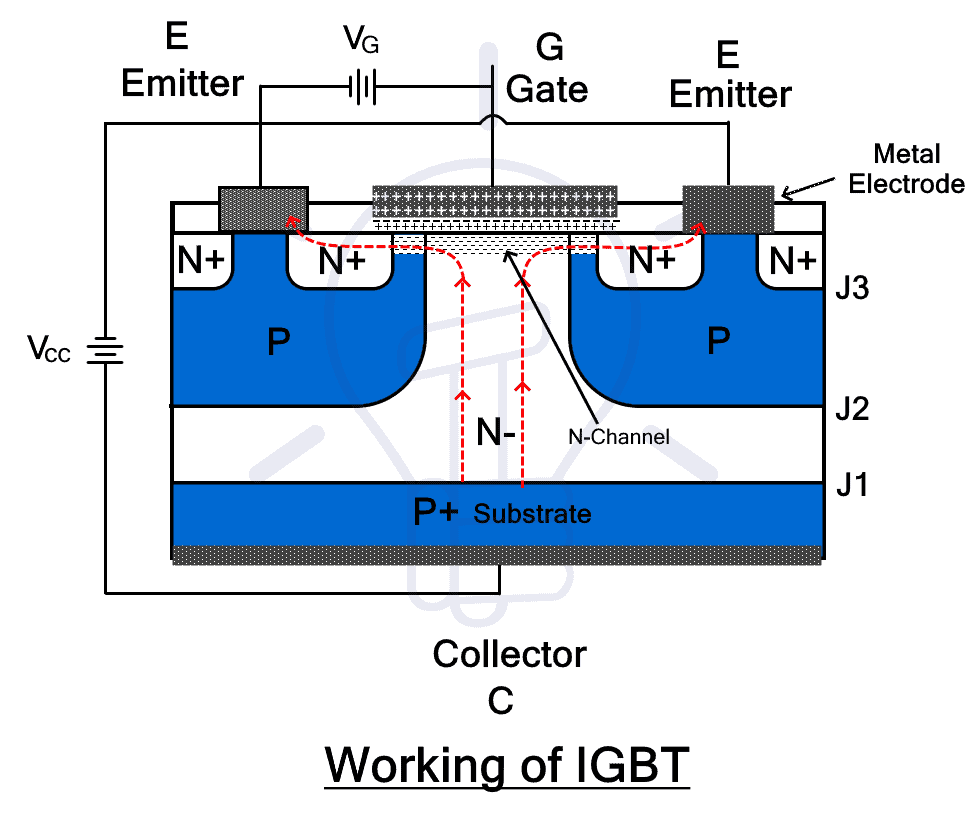 The collector-emitter is connected to Vcc such that the collector is kept at a positive voltage than the emitter. The junction j1 becomes forward biased and j2 becomes reverse biased. At this point, there is no voltage at the gate. Due to reverse j2, the IGBT remains switched off and no current will flow between collector and emitter.

Applying a gate voltage VG positive than the emitter, negative charges will accumulate right beneath the SiO2­ layer due to capacitance. Increasing the VG increases the number of charges which eventually form a layer when the VG exceeds the threshold voltage, in the upper P-region. This layer form N-channel that shorts N- drift region and N+ region.

Punch through IGBTs is unidirectional and cannot handle reverse voltages. Therefore, they are used in DC circuits such as inverters and chopper circuits.

Unlike BJT, IGBT is a voltage-controlled device that requires only a small voltage at its gate to control the collector current. However, the gate-emitter voltage VGE needs to be greater than the threshold voltage. 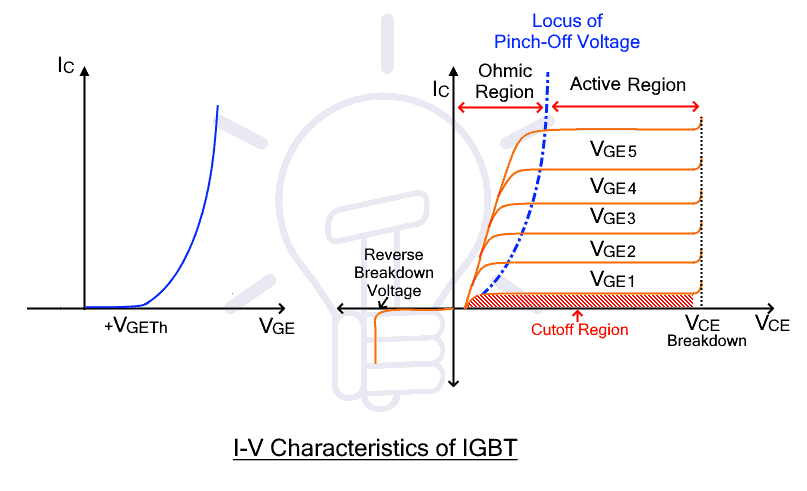 The given graph shows the relation between the collector current IC and collector-emitter voltage VCE at different levels of VGE. At VGE < VGET the IGBT is in cutoff mode and the IC = 0 at any VCE. At VGE > VGET, the IGBT goes into active mode, where the IC increases with an increase in VCE. Furthermore, for each VGE where VGE1 < VGE2 < VGE3, the IC is different.

General Comparison with BJT and MOSFET

As we have discussed above, IGBT takes the best parts of both BJT and MOSFET. Therefore, it is superior in almost every way. Here is a chart of some of the characteristics showing the comparison between IGBT, BJT and MOSFET. we are comparing power devices in their max capabilities.

IGBT as a whole has the advantages of both BJT and MOSFET.

IGBTs have numerous applications used in AC as well as DC circuits. Here are some of the important applications of IGBT

What is GTO? Types, Construction, Working and Applications