If you are an electronic enthusiast, then you must be familiar with soldering iron device. This is generally used to design electronic circuits on PCB. If you are not using an adjustable soldiering iron for soldering, then chances are you might end up damaging your IC or even the device.

The voltage requirement of a soldering machine entirely depends on the solder ratings of the components used in the device. For example, a small device or IC needs only 5 Watts power whereas a large device might need 25- 30 Watts iron. Some of the huge devices also need even 50 Watts or more depending.

In this article, we will be designing a temperature controller for soldering iron by using basic electronic components like resistors, DIAC, and TRIAC. Before starting with the design process of this circuit, let us discuss the prime components used in the circuits namely DIAC and TRIAC. As resistor and capacitors used in the circuit don’t need any explanation and is quite familiar with every hobbyist and we have already discussed them in details as well.

DIAC is a discrete electronic component that is also known as symmetrical trigger diodes. This is a bi-directional semiconductor switch that can be used in both forward and reverse polarities. DIAC are very often used in triggering of TRIAC, means used in the combination of DIAC-TRIAC. One of the most interesting facts about the DIACs is that they are bi-directional devices in which any of the terminals can be used as the main terminal.

Each time the voltage in the cycle falls, the device is reset to its conducting state. DIACs provide equal switching to both halves of an AC cycle as the behavior of the device is equal in both the directions.

DIACs are manufactured in three layers and five layers structure. Let us see the construction of both one by one. 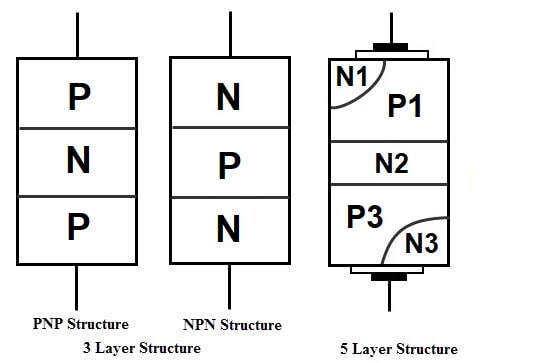 In this structure, the switching occurs when the reverse biased junction experiences the reverse breakdown. This is the most commonly used DIAC in practical due to its symmetric operation. This three-layered DIAC can reach the breakdown voltage of around 30V in general and capable of providing enough improvement in switching characteristics.

The five-layer structure of DIAC is very different in term of operation. This device structure forms an I-V curve which is like the three-layer version. You can say that this structure looks like two break-over diodes connected back to back.

DIACs are of great use in electronics due to the nature of its symmetric operation. Some of the general applications include:

As the name suggests, TRIAC is a three terminal device that controls the flow of current. It is used to control the current flow in AC for both halves. It is a bi-directional device, also a member of the thyristor family. TRIAC behaves as two conventional thyristors connected back to back with each other. 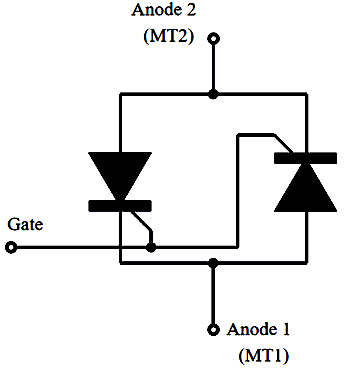 In most of the AC switching applications, the gate terminal of TRIAC is attached to the main terminal.

The construction of TRIAC is of four layers. This device can conduct in either direction when triggered by a single pulse.  The PNPN is placed in the positive direction and NPNP in the negative direction. It acts as open circuit switch that blocks current in its OFF state.

There are four modes in which TRIAC can be operated namely:

Mode I + : MT2 current is positive and Gate Current is also positive

Mode I – : MT2 current is positive and Gate Current is also negative 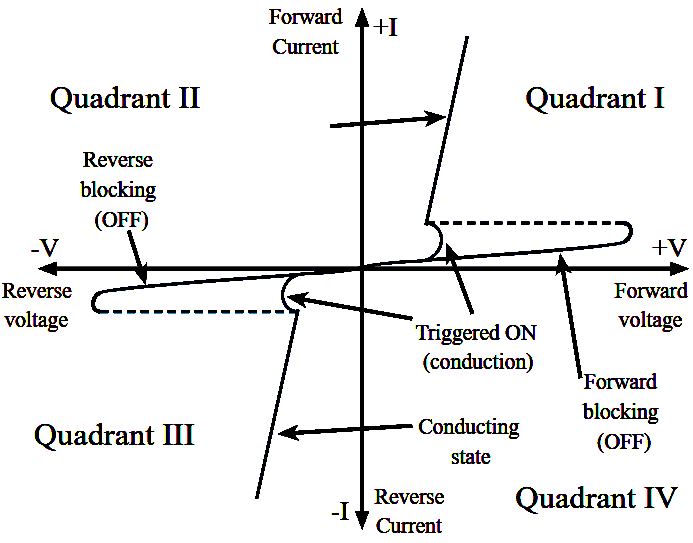 The TRIAC is triggered into conduction by a positive current applied at the Gate terminal. This is labeled as mode I in the above discussion. You can also trigger the TRIAC by a negative gate current, which comes into mode Ι–.

Following the same process, in Quadrant ΙΙΙ, triggering with a negative gate current, –ΙG is also common in both mode ΙΙΙ– and mode ΙΙΙ+. Modes Ι– and ΙΙΙ+ are, however, less sensitive configurations that require a great amount of current at Gate terminal to cause triggering than the more common TRIAC triggering modes of Ι+ and ΙΙΙ–.

We hope that you have got a good knowledge of DIACs and TRIACs. We have discussed the working of both the devices in the above discussion to help you understand the use of both the components in the soldering iron temperature controller. Apart from these two, we have used a potentiometer in our circuit to control the temperature with a knob.

The temperature of this controller circuit can be varied from the maximum value, to regulate the heat dissipation. Connect this circuit to the soldering iron to make a rise in iron temperature quickly in no time. The TRIAC connected here in the circuit, switches the high current and voltages over both parts of an AC waveform. The TRIAC is fired in different angles to get different temperature levels from 0 degrees to maximum. The connected DIAC controls the firing in both directions. Here, you can use the potentiometer to set the temperature accordingly.