Different terms used for arresters are sometimes confusing even professional engineers and electricians use them interchangeably.

We will discuss the main difference between the different types of arresters such as surge arrester, lightning arrester, surge suppressor and lighting rod as sometimes, they may used for same purpose. The difference shows that what kind of system you want to protect from what and how?

Let’s see the basic definitions of the following arresters. We will discuss all of them in details below.

Now let’s discuss all these arresters in details.

What is a Surge Arrester?

Surge arrester is a voltage limiting device installed inside the installation equipment panel to protect the insulation, equipment and machines not only from lightning, but also from transient voltage produced by switching, sparks, load shading and other electrical faults such as ground faults etc.

Surge arresters are used to limit the current and voltage surges to protect the low and high voltage appliances as well as communication lines. The most common surge arrester is a non-linear metal oxide resistors type in a porcelain or silicone rubber housing, and are fitted in parallel with the intended circuit to protect from surges and connected to the earth grid. 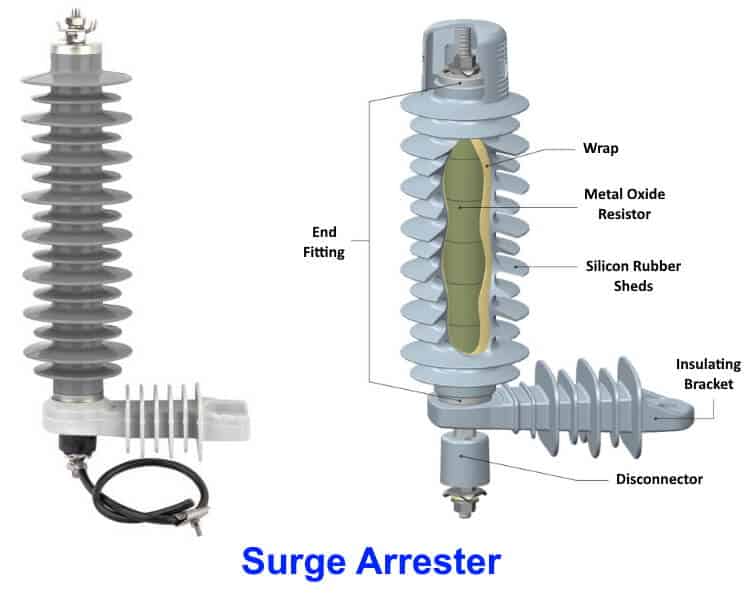 In olden days, the term “lightning arrester” was used in power system which is replaced by the new term as “surge arrester”. This is because the main reason for most of over voltages was lightning when the power system design was not that much complicated. In most advanced designs, load shading, sudden change in high power in load, and disconnector switching in EHV substation causes over voltage where surge arrester are used in a substation instead of lightning arrester which provides protection against all of the above mentioned surges. In LV/MV transmission and distribution lines, a new term as “line arrester” is also used for lightning / surge arresters.

What is a Lightning Arrester?

Lightning Arrester is a protective device used to protect the circuit from lightning strokes having high transient voltage surges, surge currents due to lightning, spark and isolation arcs etc.

Lightning arresters are installed on the peak height of a structure i.e. transmission poles and towers and building to provide a safe path to the discharging current and voltage caused by the lighting strokes to the ground to protect the system form lightning induced problems. 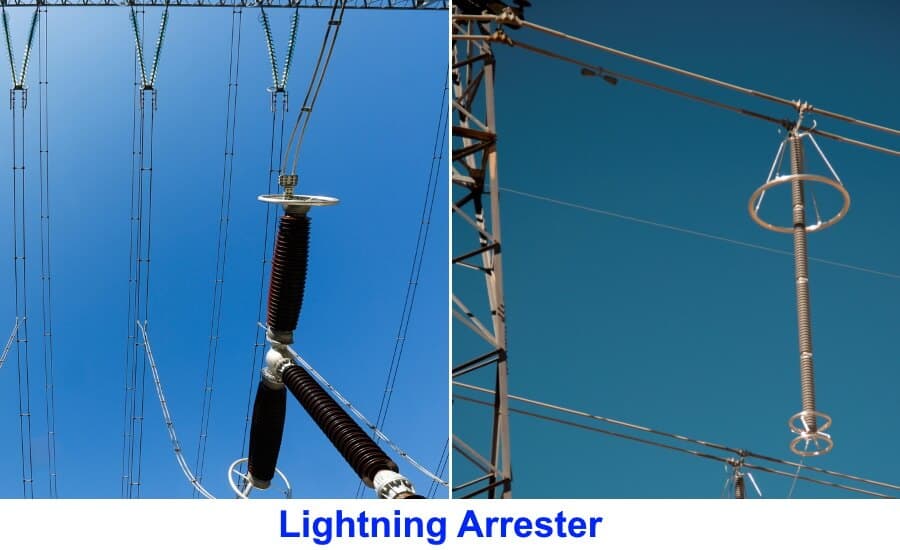 What is a Lightning Rod?

A lightning rod (also known as lightning conductor) is a metal rod (copper or aluminium or other conducting materials) installed on the top of the structure ( transmission and distribution towers , buildings etc) to protect it from the direct lighting strikes.

Lightning rod is cheaper than surge arrester which is mounted on the top surface of a building or power lines tower which provides a safe path to the high value electrostatic charges and lightning currents to the ground (it must be properly earthed to the grounding system as well). 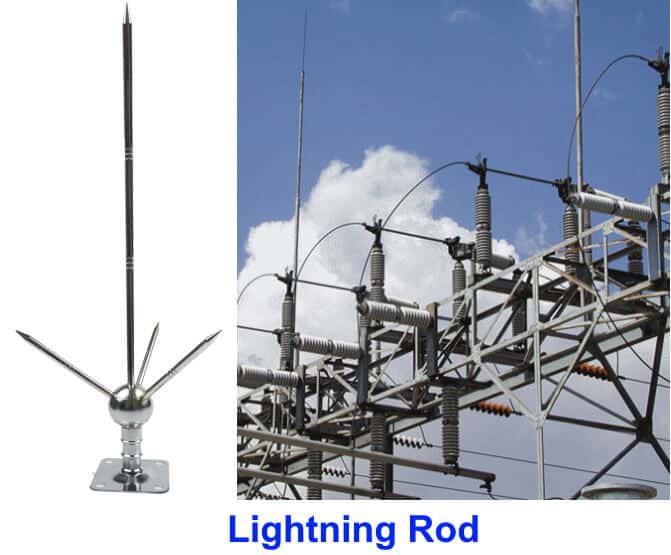 What is a Surge Suppressor?

Surge Suppressor is also known as surge protector or transient suppressor. It is a device installed in the home distribution board to protect the home wiring installations from voltage surges or switching surges.

For example, when an inductive load is switched off, it generates voltage surges (also known as switching surges) in the system following the self inductance laws of back EMF.

These sudden spikes and surges may damage the devices sensitive to the voltage rating.

In inductive load, switching the contactor could produce switching surges which may harm other connected devices in the system. For this reason, a surge suppressor is used in LV contactor to protect the contactor from external surges and system from harmful effects of contactor switch itself.

Surge suppressor is typically a utility outlet(s) with power ON/OFF switch having three wire cord which can be plugged in a wall outlet.

The value of our homes supplies voltage for instance 120V (US) and 230V AC (UK & EU) is RMS value known as effective value. The peak value of 120V and 230V is 170VP and 325VP having 60Hz and 50Hz of frequency respectively. In case of transients caused by multiple factors such as lightning or switching surges, the value of peak voltage may rise to many hundreds of volts even thousands volts of irregular pulses for a very short of time (generally, in microseconds (10-6). These pulses could harm the sensitive devices especially electronic devices.

In this case, the surge suppressor prevents a voltage having specific value of peak voltage. For example, a 250V voltage suppressor will operate at 230V normally while it will redirect the line power to the ground if the value of transient pulses exceeds the 250V limit.

Good to Know: Surge suppressor should not be used for protecting a circuit from the lightning produced transients and surges.