Different Types of Microprocessors and Their Application

What is a Microprocessor?

A microprocessor is a central processing unit or the brain of a computer inside a single Integrated circuit (IC). It is made up of millions of semiconductor transistors, diodes & resistors and it is responsible for any arithmetic or logical operation. It is a digital device capable of processing any binary data given to it.

A general-purpose microprocessor consists of ALU (arithmetic logic unit), control unit and register array. The ALU’s purpose is to apply any logical or arithmetic operation on the data provided by the computer memory. The microprocessor fetches the instruction from memory and executes it sequentially. When the instruction is complete, it sends the resultant data through the output in a binary digital form. 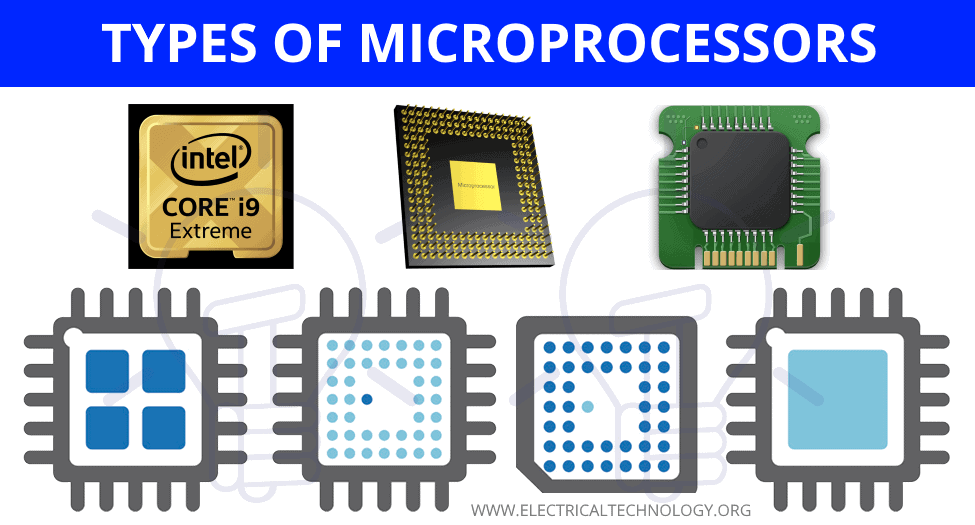 The Second generation processor was an 8-bit microprocessor developed by Intel in the year 1973. It was named Intel 8008 because it was 8 bit.

There are different types of microprocessors designed to be used for specific purposes. It has been evolved to be used in various different applications. They are mainly classified into three major types;

A complex instruction has multiple simple instructions like arithmetic operation, storing in memory, reading from memory, etc. The overall length of the program is relatively very small but due to the large size of its instruction set with many addressing modes in a single instruction, it takes multiples machine cycles to execute an instruction. Thus it reduces the execution speed of the microprocessor.

The coprocessor is physically separate from the main processor (CPU) and it works independently. They are very fast in executing a specific task because of its limited instruction set. Therefore, they cannot be used for general purpose applications like CPU.

The transputer is the first general-purpose computer designed by Inmos to perform parallel computing. It also incorporates internal memory with serial communication links to communicate between processors for parallel operation.

They were designed to be used together to perform the parallel operation but a single transputer has the essential circuitry to work on its own. Examples of transputers are Inmos TPCORE, T400, T100, etc.

The DSP or digital signal processor is a type of microprocessor specifically designed to process any signal. The architecture of DSP is fairly optimized to process signals in applications such as audio processing, speech recognition, image processing, radar, sonar, smartphones, etc.

The main objective of DSP is to convert between analog and digital signal (known as ADC & DAC) and process them by filtering, compressing & applying various algorithms in digital format. It can process multiple signals at a time in parallel operation.

Input/output Processor or IOP is a special type of processor designed to control and manages the input and output tasks of a computer. They have direct access to the memory and are similar to the CPU except they only process I/O peripherals such as a mouse, keyboard, printer, display unit, etc.

The CPU and IOP acts as master and slave, the CPU sends the instruction for operation and the IOP execute it.

The graphic processor or Graphics Processing Unit (GPU) is a special type of processor specifically designed to accelerate the process of creation of images. The graphic processor executes the instructions in parallel which is the reason it is faster than the CPU. They are mostly used for rendering images in CGI (computer-generated imagery) or in video games. They are used in display devices such as smartphones, computers, gaming consoles, etc.

The GPU contains a graphic processor with other essential components like ram and cooling components. NVidia Corporation and ATI technologies are some of the companies that develop GPU for gaming, 3d animation and rendering, video editing, and CGI, etc.

The scalar microprocessor can process one set of data at a time. It can execute only one instruction in a single clock cycle.

Types of Computer Memory with their Applications