Supermesh or Supermesh Analysis is a better technique instead of using Mesh analysis to analyze such a complex electric circuit or network, where two meshes have a current source as a common element. This is the same where we use Supernode circuit analysis instead of Node or Nodal circuit analysis to simplify such a network where the assign supernode, fully enclosing the voltage source inside the supernode and reducing the number of non-reference nodes by one (1) for each voltage source.

In supermesh circuit analysis technique, the current source is in the inner area of the supermesh. Therefore, we are able to reduce the number of meshes by one (1) for each current source which is present in the circuit.

The single mesh can be ignored, if the current source (in that mesh) lies on the perimeter of the circuit. Alternatively, KVL (Kirchhoff’s Voltage Law) is applied only to those meshes or supermeshes in the renewed circuit.

By the way, it is difficult to understand by Preamble, so we will first solve a simple circuit by supermesh circuit analyses, and then, we will summarize the whole supermesh analysis (step by step). 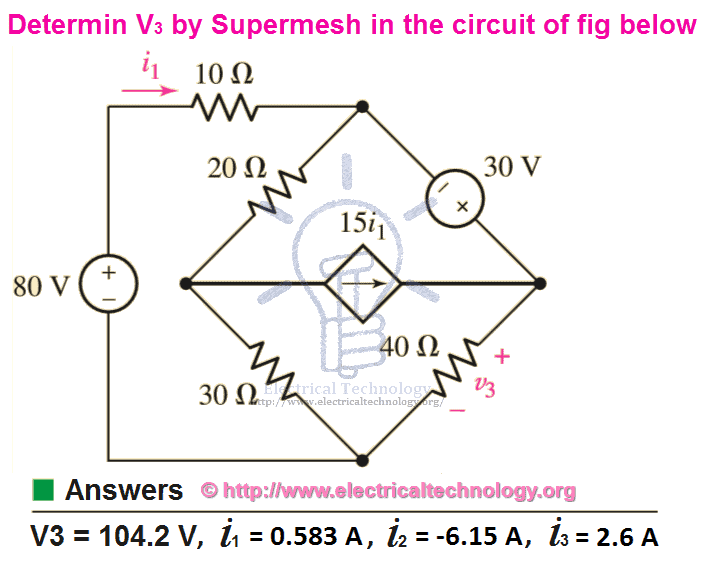 Use Mesh analysis to find V3 and Current i1, i2 and i3 in the following fig?

Now apply KVL on Supermesh (which is integration of mesh 2 and mesh 3, but we have reduced it by single mesh which is known as supermesh)

But here, we have three (3) variables i.e. i1, i2 and i3. And there are two equations. So we must need three equations as well.

The independent current source (in the supermesh) is related to the assumed mesh currents, i.e.

Also, we can find the value of V3,