What is Superposition Theorem?

“In any linear bilateral network having a greater number of sources, the response (voltage and current) in any element is equal to the summation of all responses caused by individual source acting alone. While other sources are eliminated from the circuit.”

In other words, we will consider only one independent source acting at a time. So, we need to remove other sources. The voltage sources are short-circuited and the current sources are open-circuited for ideal sources. If the internal resistance of sources is given, you need to consider the circuit.

The superposition theorem is only applied to the circuit which follows Ohm’s law.

When to Use the Superposition Theorem?

The network must follow the below requirements to apply the superposition theorem.

Step-1 Find out a number of independent sources available in the network.

Step-2 Choose any one source and eliminate all other sources. If the network consists of any dependent source, you cannot eliminate it. It remains as it is throughout the calculation.

Step-4 Repeat step-2 and 3 for all energy sources available in the network. If there are three independent sources, you need to repeat these steps three times. And every time you get some value of the response.

Step-5 Now, combine all responses by algebraic summation obtained by individual sources. And you will get a final value of response for a particular element of a network. If you need to find a response for other elements, you need to follows these steps again for that element. 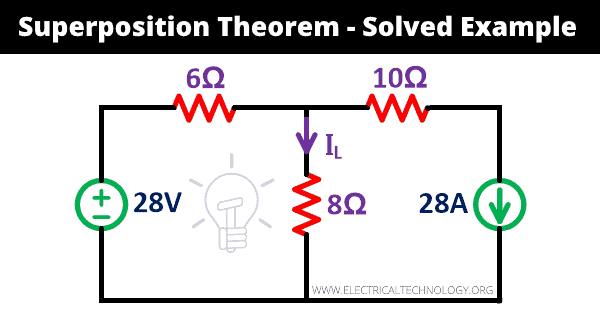 Step-1 As shown in the above network, one voltage source, and one current source is given. Therefore, we need to repeat the procedure two times.

The remaining circuit is as shown in the below figure. 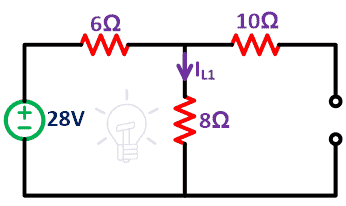 Step-3 Find the current (IL1) passes through 8Ω resister. It gives the effect only of a voltage source.

Due to the open circuit of a current source, no current passes through the 10Ω resister. So, the network consists of only one loop.

Apply KVL to the loop;

Step-4 Now, we repeat the same procedure for the current source. In this condition, we remove the voltage source by short-circuiting. A remaining circuit is as shown in the below figure.

Here, we have to consider two loops. I1 and I2 are loop current. And find the current IL2.

Apply KVL to the loop-1;

The current passes through the loop-2 is calculated from the current source. And it will be;

Put this value in the above equation;

Step-5 Now, we combine the effect of both sources by algebraic summation of current. So, the total current passes through the 8Ω resister are IL. Here, the direction of the current is most important. Current IL2 has a minus sign. It means during the 28A source, the current flows in opposite direction. And we cannot change the direction. That’s the reason while combining all sources, we are doing algebraic summation.

Here, we have assumed that the current passes through the 8Ω resister are in the direction of the arrow shown in the figure. Minus sign shows the opposite direction. And the amount of current is 8A.

The superposition theorem experiment can be done by following the below steps.

Determine the current flowing through the resistors and verify the superposition theorem.

Superposition theorem is used in circuit analysis to find the current and voltage across the elements in a given circuit. This theorem is useful when the number of sources is more.

According to the superposition theorem, the response of elements is an algebraic summation of response from the individual energy sources.

We consider the linear bilateral circuit given in the below figure.

Connect all elements on the breadboard as given in the above circuit using connecting wires. Connect ammeter with all resisters to find the current passes through the resistors. Here, we have two voltage sources.

In the first case, measure the current that passes through all resisters when both voltage sources are present in the circuit. The current flowing through the resistor R1, R2, and R3 is I1, I2, and I3 respectively.

Now remove the 12V voltage source from the circuit. Short the terminals A’ and B’ as shown in the above figure. Here we have assumed that the voltage sources are ideal. So, no need to connect internal resistance. Now, measure the current I1′, I2′ and I3′ which is the current that passes through the resistor R1, R2, and R3 respectively.

Similarly, remove the 9V voltage source and the remaining circuit is as shown in the above figure. Again, measure the current flowing through all resisters and name it I1“, I2“, and I3“.

Put all values in below observation table.

To verify the superposition theorem, we compare the algebraic summation of current passes through resisters when an individual source is connected with the current measured when both sources are connected in a circuit.

If the above calculation satisfies, we can prove the superposition theorem.

In this experiment, we can prove that the current that passes through the resistance is an algebraic summation of current when an individual energy source is connected. And it proves the superposition theorem.