Our industries use various kinds of machines. The induction machine is one of the most used three phase AC machine which is almost 70% of the motors used in industries. their robust construction and high efficiency makes it the best choice for every industrial sector. But they do require protection devices & equipment used for their safe operation so it can operate safely and prevents any potential damage to the motor and also increase their life span. The most essential equipment used for three phase induction motor is a motor starter.

A motor starter is an electrical device that is used for safely starting and stopping an electrical motor. It also offers protection against overcurrent & low voltage protection.

Since the induction motor is extensively used for various kinds of applications in industries, they need motor starter to safely start & stop it. The induction motors draws a huge amount of current at starting. It is due to the low impedance of the windings of the motor at standstill.

The rotor current generates its own magnetic field that try to cancel its cause & starts rotating in the direction of RMF. Thus the rotor experience torque & as its speed starts increasing the slip of the motor decreases (i.e. the rotor RMF speed approaches near stator RMF speed). Since the slip is reduced, the impedance of the rotor increases & the motor start drawing normal rated current.

The High inrush current is 5-8 time larger than the full load rated current of the motor. Induction motor cannot tolerate such amount of current as it can quickly damage or burn the windings, reducing the performance & lifespan of the motor. Such high currents can also cause huge dip in the line voltage which is dangerous for other appliances connected to the same line.

In order to prevent such high inrush current, we use motor starters that reduces the initial current for a short duration. Once the motor gains certain speed, the normal power supply is resumed. It also offers protections against low voltage & overcurrent.

These motor starters are usually used for heavy power rated motors. Small motors below 1Hp does not require motor starter due to their high impedance. However, they do need overcurrent protection that is available in DOL starter.

What is Soft Starter?

The soft starter is a type of motor starter that uses the voltage reduction technique to reduce the voltage during the starting of the motor.

The soft starter offers a gradual increase in the voltage during the motor startup. This will allow the motor to slowly accelerate & gain speed in a smooth fashion. It prevents any mechanical tear & jerking due to sudden supplying of full voltage.

Therefore we can say that a soft starter is a device that reduces the starting torque & gradually increase it in a safely manner until it reaches it rated speed. One the motor attains its rated speed, the soft starter resumes the full voltage supply through it.

During motor stopping, the supply voltage is gradually reduced to smoothly decelerate the motor. Once the speed reaches zero, it breaks the input voltage supply to the motor.

The main component used for the regulation of voltage in a soft starter is a semiconductor switch such as a Thyristor (SCR). Adjusting the firing angel of the thyristor regulates the voltage supplying through it. Other components such as OLR (overload relay) used for overcurrent protection is also used.

In a three phase induction motor, two SCRs are connected in an anti-parallel configuration along each phase of the motor making it a total of 6 SCRs. These SCRs are controlled using a separate logic circuitry that can be a PID controller or a microcontroller. The logic circuitry is powered from the mains using a rectifier circuit as shown in the figure. 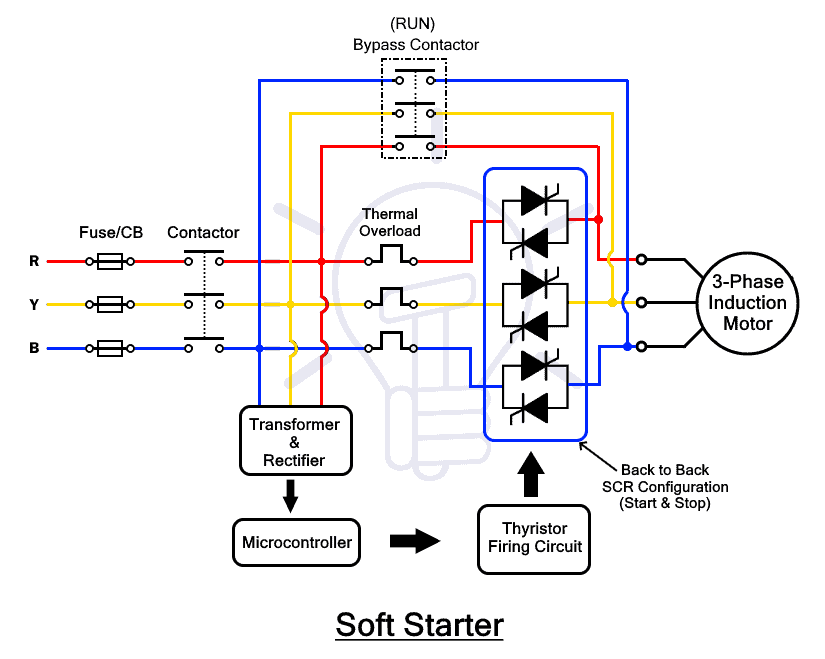 Apart from the Power switches & logic circuitry, other protection components such as the circuit breaker or fuse, magnetic contactor for isolation & an OLR (Overload relay) for prevention of overcurrent is used.

A bypass switch is also used to resume the full voltage across the motor when it attains the full rated speed.

The main component used for controlling the voltage in a soft starter is a thyristor. It is a controlled rectifier that starts conduction of the current flow in only one direction when a gate pulse is applied called the firing pulse. 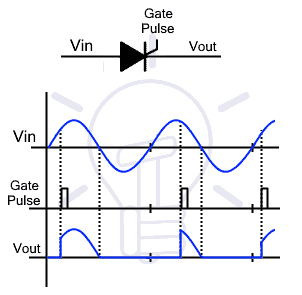 The angle of the firing pulse determine how much of the input voltage cycle should be allowed through it. Since AC swings between maximum & minimum peak forming a complete 360° cycle, we can use the angle of firing pulse to switch on the thyristor for a specific duration and control the supplied voltage.

The firing pulses can vary between 0° to 180°. The decrease in the angle of firing pulse increases the conduction period of thyristor, thus allowing high voltage through it. 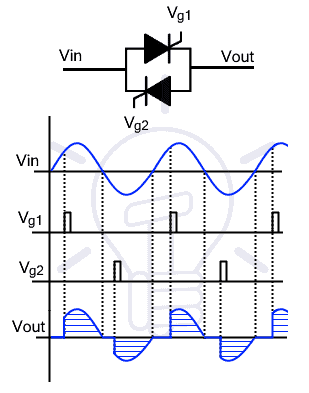 Two such thyristors are connected in back-to-back formation for each phase. So it can control the current in both directions. Each half cycle, the firing angle 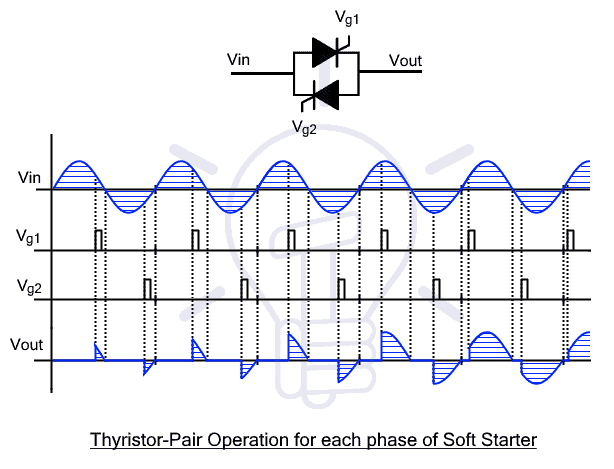 The three pairs of thyristors, each pair for individual phase are used for controlling the voltage to start & stop the motor. The thyristor conduction period depends on the firing angle controlled by the logic circuitry.

The logic circuitry contains PID controller or a simple microcontroller programmed to generate pulses. The controller is isolated from the supply mains using opto-isolator & a rectifier is used for supplying DC source. The pulses generated by microcontroller are fed to a thyristor firing circuit that amplifies it before triggering the SCR.

When the motor starts up, the controller generates pulses for each individual SCR. The pulse is generated based on the zero crossing that is detected using a zero crossing detector. The first firing pulse angle is approximately near 180° (very low conduction period) to allow minimum voltage.

Gradually after each zero crossing, the angle of firings pulses starts decreasing, increasing the conduction period of thyristor. The voltage through thyristor starts increasing. Hence the motor speed gradually increases.

Once the motor attains its full rated speed (at 0° firing angle), the thyristors are completely bypassed using a bypass contactor under normal operation. It increases the efficiency of the soft starter since the SCR stops firing. During motor stopping, the SCR takes the control & starts firing in orderly fashion to reduce the supply voltage.

The bypass contactors are not meant to break or make the current supply to the circuit, thus it can be a low rated contactors.

Smooth Startup: Unlike conventional motor starter, it provides very gradual increase of voltage thus speed that results in a very smooth startup. There is no mechanical stress whatsoever or jerks that can damage the motor.

No Power Surges: Since the conventional motor starter allows full voltage across the motor, a huge inrush current start flowing into the motor that cause a power surge in the circuit. the soft starter limits such current thus preventing the power surges.

Multiple Startups: Some applications require the motor to start & stop multiple times in small period of time. such motor if used with a conventional starter will experience overheating due to high starting current. However, soft starters drastically increases the number of startups for a motor in a specific duration.

Reduction of Overheating: The motor overheating is a very serious problem. It occurs due to the high winding current during its startup. The soft starter allows a very small amount of starting current which prevents the overheating of motor.

Increased Life Span: The soft starter as compared to a conventional starter improves the life time of the motor. it is due to the smooth operation & absence of electrical & mechanical stress on the motor.

Less Maintenance: Due to its smooth operation, the induction motor is less likely to have any mechanical faults, which is why it require less maintenance as opposed to conventional motor starter.

Efficiency: A conventional motor starter supply full voltage (very high inrush current) to the motor that consumes too much energy. A soft starter significantly reduces it & allows a gradual increase in energy consumption. Also the power switches are controlled using very low voltage level. It improves the overall efficiency of the motor.

Compact & Small Size: The soft starter has a very compact design that takes up very small space. Unlike other motor starters, it has very small size.

Low Cost: compared to other starters such as VFD, this sure does cost cheaper.

No Speed regulation: The soft starter only allows the control of input voltage supply i.e. from 0 volts to line voltage with a fixed line frequency. Since the frequency is constant the motor speed is constant & only regulates by the load connected with it. The speed of induction motor is regulated by varying the supply frequency below or above the line frequency according to the need. Such feature is only available in VFD (variable frequency drive).

Heat dissipation: The semiconductor switches inside the soft starter dissipates some energy in the form of heat. Therefore, it also requires heat sinks for cooling the power switches.

The soft starter is used in industries & is more appropriate to be used for motors that run on a constant speed.

Fans: The huge fans used in industries runs at a constant speed. However, they do require the startup protection. A soft starter is a best option for such fans.

Conveyer belts: The conveyer belts in industries are used for moving objects & it needs extra care. The sudden jerks during starting or stopping using conventional starter may misalign the belts, damages the belt due to mechanical stress & damage the objects placed on it. It requires a smooth starting & stopping offered by a soft starter

Motors using belt & pulleys: The motor that drives load through belts & pulleys cannot tolerate the sudden jerks. It wears the belt that couples it to the load. A soft starter offers a smooth starting for such motor applications.

Water or liquid Pump: Any type of pump connected with a motor requires a smooth starting & stopping due to the sudden pressure building inside the pipes. A conventional starter may generate enough pressure at startup to break the line. A soft starter offer gradual increase in the pressure to such liquid pumps. However, there is no speed control of the pump during normal operation. A VFD is a better choice for variable pump speed.

How to Wire Solar Panel & Batteries in Parallel for 12V System

How to Wire Solar Panels in Parallel & Batteries in Series? 24V System