Electric power is generated in power plants. In most cases, power plants are placed far from the load centers. Hence, the transmission line is used to transmit power over a long distance.

To reduce the transmission losses, high voltage power is used in a transmission line. And voltage level is reduced at the load center. The power is distributed to load by a distribution system. 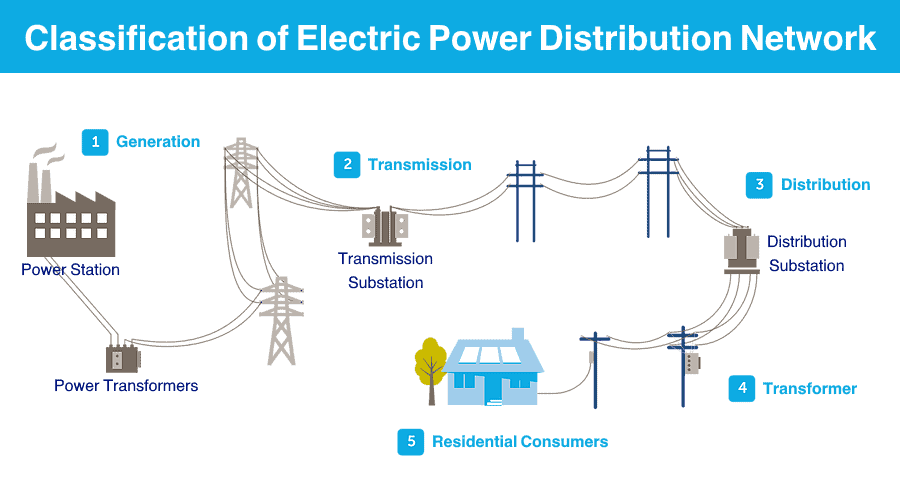 The distribution system is classified as below;

1) According to the nature of the supply

2) According to a type of connection

3) According to a type of construction

Let’s understand the classification of a distribution system in brief.

Classification According to Nature of Supply

In most of the conditions, the power consumer or load requires AC power. Therefore, the electric power is generated, transmitted, and distributed in the form of AC power. Because an AC voltage can be easily step up and step down with the help of a transformer.

According to the voltage level, the AC distribution system is further classified into two types;

The primary distribution system supplies power to big consumers like industries or large commercial complexes, etc. The voltage level is stepped down at the utilization level by a step-down transformer. This transformer is placed near to the consumer premises.

The typical arrangement of a primary distribution system is as shown in the figure below.

Some consumers require three-phase supply like small scale industries, flour mills, etc. This type of consumer uses a three-phase supply by using R, Y, B, and N terminals. The arrangement for the secondary distribution network is shown in the figure below.

In this condition, generated AC power is converted into DC power with the help of a rectifier or rotary converter. The applications where we need DC power are; traction purpose, DC motors, Battery charging, and electroplating.

According to the connection of DC system, it is classified into two types;

This type of distribution system requires three wires; two wires are healthy wires and one wire is the neutral wire. The main advantage of this system is that we have two voltage levels in this system.

Classification According to Method of Connection

The distribution system is classified into three types according to the method of connection;

In a radial system, a separate feeder is used to feed power from the substation to each area. And this feeder feeds power to a distributor in one direction only. The design of the radial system is simple and easy to implement in the system.

The initial cost of this system is less compared to other systems. But the reliability of this system is very low. If one feeder is out of step condition, the entire system will stop. This type of system is only used for a short-distance distribution system.

The consumer far from the feeder may suffer poor voltage regulation and voltage fluctuation with a variation of load. Due to this advantage, this type of system is only used to supply the load which is near to the feeder. The single line diagram of the radial system is shown in the figure below.

We can compare this arrangement with two feeders connected in parallel. For example, if a fault occurs between B and C points. In this condition, the part between B and C will isolate from the system. And substation supply power in two different ways.

It makes the system more reliable. And there is less voltage fluctuation at the consumer’s end. Each part of the ring carries less current. So, less conductor material is required compared to radial system.

As shown in the above figure, loop ABCDEFGHA is supplied by two substations at points A and E. Due to this type of arrangement, the reliability of the system increases compared to the ring main and radial system.

The design of the interconnected system is very difficult and the initial cost of the system is also high as a greater number of substations are required in a system. But this system has the advantage of good power quality and a more efficient system. This system reduces reserve power capacity.

Classification of Distribution System According to Type of Construction

According to the construction of distribution system is classified into two types;

But the initial cost of the overhead system is less. The overhead transmission system is more flexible compared to the underground system. Because this system is permanently placed once installed. Hence, it is easy for load expansion and laying a new line. The conductors are placed over the surface. So, the appearance of this system is not good as an underground distribution system.

In the overhead system, the conductors are placed with taking proper space. Hence, the air is used as an insulation medium. So, it does not require special insulated cables. The current carrying capacity of the overhead system is higher compared to the underground system.

Why are Outlets and Receptacles in Hospitals Upside Down?